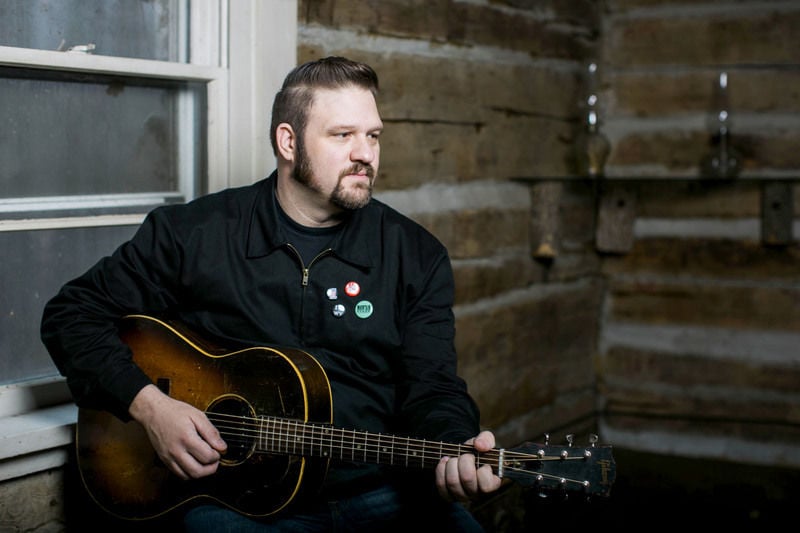 Fayetteville musician, Andrew Adkins, known for years as a member of the popular band The Wild Rumpus, has been building a fan base under his own name since recording his first solo project, "The Long Way to Leaving," in 2014. 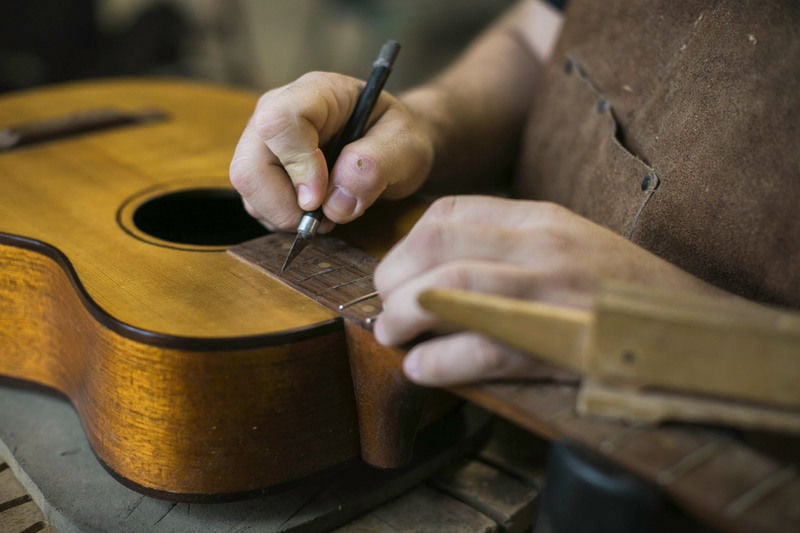 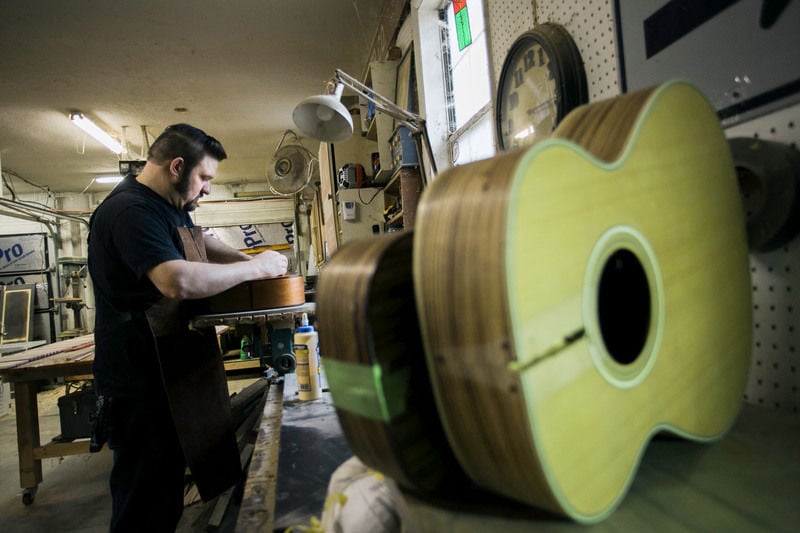 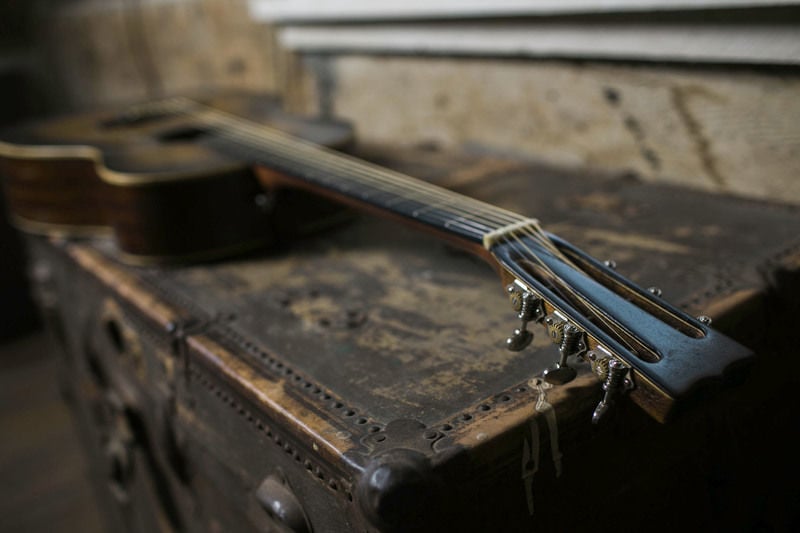 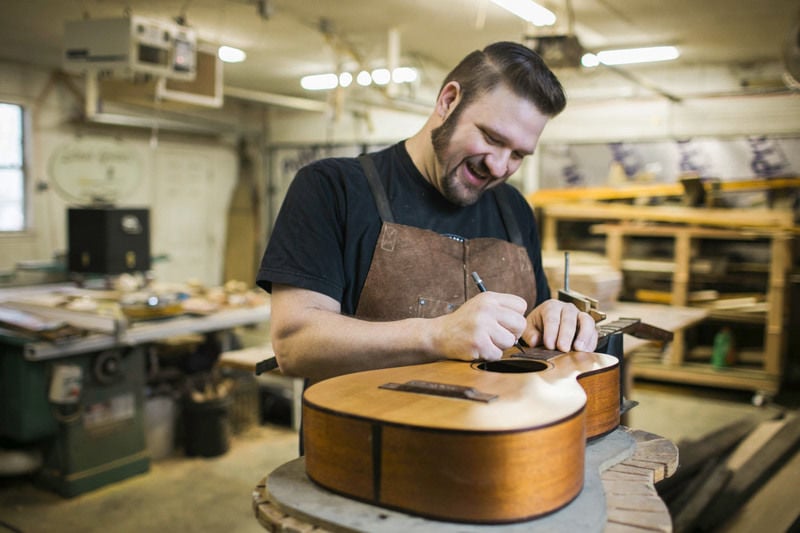 Fayetteville musician, Andrew Adkins, known for years as a member of the popular band The Wild Rumpus, has been building a fan base under his own name since recording his first solo project, "The Long Way to Leaving," in 2014.

"Mountain Stage" host Larry Groce has barely begun introducing the night's musical acts when it happens. A lone voice bellows "Go, Andrew!" and then other excited fans from the packed audience join the call. In a couple of minutes, the Fayetteville singer-songwriter will start gently picking the plaintive four-note guitar figure that underpins his song "Fragile Heart" — a slow, introspective tune that looks at youthful romance through the lens of experience — but right now, in this moment, Andrew Adkins' home crowd owns the room.

"It was a dream come true," Adkins says of his January appearance on the Charleston-based radio program, which airs nationwide and is produced by West Virginia Public Broadcasting. "I've been listening to 'Mountain' Stage my entire life, and it molded my musical tastes. My band had some of the best musicians on the planet, and I really connected with the audience. I was the only act of the night to get a standing ovation. It was just an amazing day."

Adkins has had more and more amazing days lately, especially when it comes to his music career. His masterful new album, "Who I Am," was praised by one reviewer as "exceptional for its emotional range" and found him being called "the embodiment of the current state of roots music in West Virginia" by another. Known for years as a member and primary songwriter of the popular Mountain State band The Wild Rumpus, Adkins has been building a fan base under his own name since recording his first solo project, "The Long Way to Leaving," in 2014.

His music is solidly in the realm of what most listeners would call “country music,” with its emphasis on traditional instruments such as acoustic guitar, pedal steel guitar and mandolin and lyrics that deal with small-town life. But Adkins doesn’t make the kind of overblown, fist-pumping, pop-influenced country music that’s popular today. “When I tell people I play country music, they automatically think I’m Florida Georgia Line,” he says. “That’s not what I do.”

Adkins’ music is nuanced and self-aware. Above all, it’s built on strong, thoughtful songwriting. Each word feels carefully selected, a single thread in a well-woven tapestry, and every rhythmic structure and instrumental texture complements the story Adkins is telling on a particular song.

On his new album — produced by "Mountain Stage's" Ron Sowell and featuring top-tier West Virginia musicians such as renowned mandolinist Johnny Staats, guitarist Bud Carroll, singer Annie Neeley, dobro player Chris Stockwell, Wild Rumpus bassist Clint Lewis and "Mountain Stage" drummer Ahmed Solomon — Adkins also displays his most versatile vocals yet. His scratchy, Appalachian-hued twang can bark out words of old-fashioned wisdom such as "If you always do what you've always done / you'll always get what you've got" or trail off in a near-whisper on an evocative lyric like "five-hundred horses and a four on the floor/American steel that they don’t even make anymore."

Those rich, raspy vocals have made him a favorite of many musicians in southern West Virginia. "He has this nostalgic singing voice, much like the storytellers I grew up around who sang and played guitar," says Adkins' fellow Fayetteville singer-songwriter Kathleen Coffee. "It reminds me of family, of home here in the Appalachian Mountains."

Adkins grew up in Summersville, not far from his current hometown, in a music-loving family. "We used to drive to Florida, and we'd travel at night because my brothers were rowdy. My brothers and my mom would sleep, and I'd sit on my knees between the front seats of our van and sing with my dad," he says. "I was a huge fan of Harry Chapin [of 'Cat's in the Cradle' fame], and I knew every word to all his songs. We'd sing those, or we'd sing stuff by Kenny Rogers or John Prine."

Adkins says his family was supportive of his interest in songwriting and performing. His father, a certified public accountant and automobile dealer who later served as Summersville's mayor, even made it into one of Adkins' most autobiographical songs. In "Burning the Tires Off," from the new album, Adkins sings about his first car, a jet-black 1969 Chevy C10 that at one point landed him in jail. "That was the hardest phone call / I ever had to make / I thank God for small towns / and my daddy’s last name," he intones in a warm, intimate drawl that makes you feel as though he's sharing his life story with you in person.

"There are parts of reality in every song," Adkins says. "You can only write about what you know, and my life is what I know. You can write songs where you take bits and pieces of truth and build a character around them. But that particular song is 100 percent true."

Adkins' first band was The Wild Rumpus, which also featured Lewisburg-based banjo player and guitarist Allan Sizemore and bassist Lewis. A self-described "Appalachian stompgrass" group, the Rumpus became something of an unexpected success, thanks to lively three-hour performances that combined elements of bluegrass and old-time music with youthful energy to keep the crowds dancing. Between 2008 and 2013, The Wild Rumpus recorded three well-received albums and built a sizable audience for their much-loved live shows — of which, at their busiest, they played as many as 125 per year.

"We were just a bunch of raft guides sitting around playing after our trips," Adkins says of the band. "I enlisted some guys who bought into the fact that we were going to be a band that played original songs. The next thing you know, we were touring and playing constantly."

The Wild Rumpus still comes together occasionally for special events. Last summer the band played at Charleston's riverside Live on the Levee concert series. And in the fall it performed at a benefit for Healing Appalachia, an organization that fights addiction in the greater Appalachian region.

Mostly, though, Adkins is focusing on his solo career these days. A skilled woodworker, he also stays busy building custom furniture — and, less frequently, the handmade guitars and other stringed instruments he specialized in while operating his Fayetteville store, Leland Guitars, during the latter half of the 2000s.

If you walked into his woodshop right now, you'd see a dizzying array of items, some music-related, many not. There's a finished, beautifully constructed banjo with a fretboard featuring diamond-shaped inlays made from the same maple from which the instrument's pot — its round lower body — was crafted. Guitars hang on the wall in various stages of completion; Adkins restores them in addition to building them from square one. For years, he toured with a guitar he hand-created for himself.

For the most part, though, you'll see home furnishings that clients have asked him to build to their specifications: a farmhouse-style dinner table, a coat rack, a headboard, a bookshelf, a maple butcher block. You'll also see a workspace filled end-to-end with attractive handmade cutting boards, which Adkins and his son, Avram, built together. (Avram, 7, knows his way around a table saw, planer and drill press, and he's learned to glue, sand and oil the boards himself.)

Adkins crafts his woodwork like he crafts his songs, in a style that's sturdy, functional and uncomplicated. When he can, he uses wood from West Virginia, or even from his own property. "I'm an understated builder," he says. "I like simple, sleek, almost Shaker-style designs."

The same goes for his handmade guitars. He glues the braces to the soundboard uncarved, carves them to get the specific sound he seeks, then "tap tunes" the soundboard before gluing it to the guitar's body. In the end, each instrument he constructs has its own distinct qualities that make it one-of-a-kind.

For Adkins, it ultimately comes down to the music. He's precise in his songwriting, and he says he's increasingly selective about taking on gigs, too. So it seems natural that he'd put just as much thought — and as much functionality — into the tools he brings to the stage.