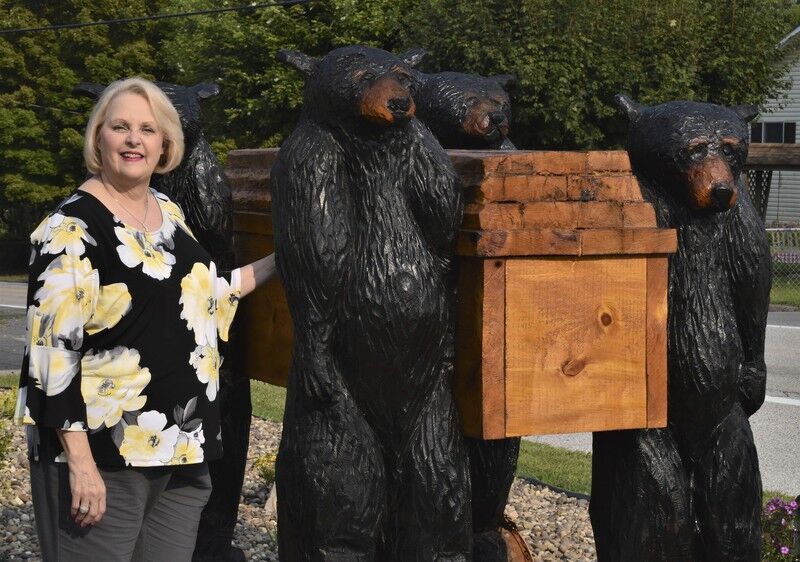 Steve Keenan/The Fayette TribuneMerry Hanning stands beside the wooden bear sculpture at Tyree Funeral Home in Oak Hill. She has been with the company since January 1992 and is currently the funeral home's operations manager. 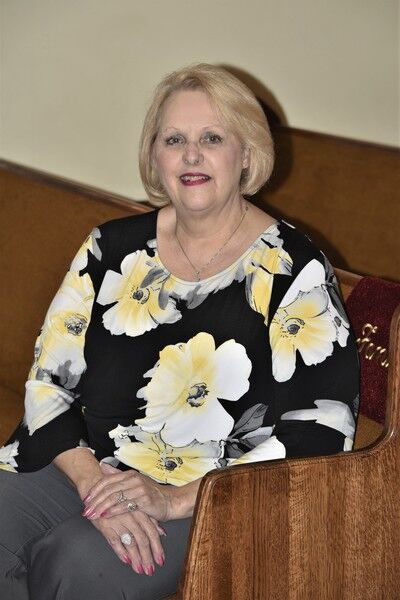 Whether on stage, involved in alumni or church activities, or at her longtime place of business, Merry Hanning is a very recognizable part of the greater Fayette County community. 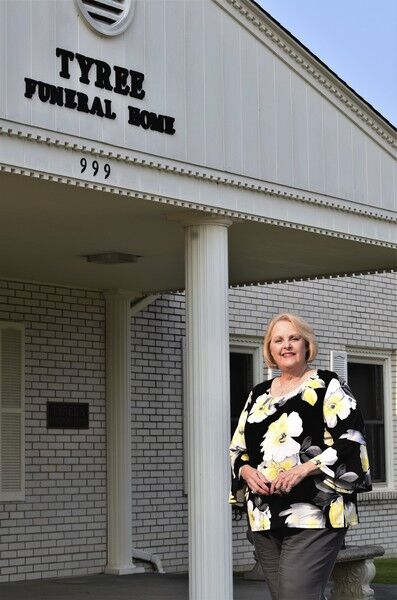 In addition to her work at Tyree Funeral Home, Merry Hanning has been active with the Oak Hill High/Collins High School Alumni Association over the years, and she has also been an active vocalist and actress in the area.

Steve Keenan/The Fayette TribuneMerry Hanning stands beside the wooden bear sculpture at Tyree Funeral Home in Oak Hill. She has been with the company since January 1992 and is currently the funeral home's operations manager.

Whether on stage, involved in alumni or church activities, or at her longtime place of business, Merry Hanning is a very recognizable part of the greater Fayette County community.

In addition to her work at Tyree Funeral Home, Merry Hanning has been active with the Oak Hill High/Collins High School Alumni Association over the years, and she has also been an active vocalist and actress in the area.

Whether on stage, involved in alumni or church activities, or at her longtime place of business, Merry Hanning is a recognizable member of the greater Fayette County community.

Merry, as in Merry Christmas, says her mother laughed when the nurse asked why "Merry?"

"She said the nurse came in to ask what are you gonna name her and she replied 'Merry M-E-R-R-Y.'" Hanning said. "Was Mom still under the effects of sedation, or maybe she just didn't have a clue what to name me, or maybe it was just meant to be – whatever the answer, here's Merry."

Hanning recalls the environment during the time she was born.

"In 1954, the U.S. continued to recover from World War II. Dwight Eisenhower was president. Gas was 22 cents a gallon, average cost of a new house was $10,250 and a new car was $1,700. Post-war economic growth continued, and a new trend called 'do-it-yourself' kicked into gear as families wanted to (maintain) and improve their homes themselves. Mass vaccination against polio began, Brown vs. Board of Education struck down school segregation, Ellis Island closed as a point of immigration, and the first issue of Sports Illustrated hit the news stands. Elvis sang 'My Happiness,' while Bill Haley and the Comets 'Rock(ed) around the Clock.'"

Also in June, under six percent of a waning crescent moon, Merry made her appearance.

Born and raised in Oak Hill, Hanning grew up singing, and music remained a defining factor throughout most of her adult live. She recalls her first solo at the age of five, when she sang "Mother Taught Me To Pray" at church with her mother, Joann Burgess, accompanying her on the piano. Hanning's identity has always been tied to her music, she says. She sang in the church choir at Jones Avenue First Church Of God for 35 years, was always active in choir while she was in school and, for over 25 years, performed in a variety of musical opportunities, including presenting programs for many civic organizations in town such as Quota Club, Lions and the Fayette Study Club.

If requested, she said she'd show up with her "orchestra in a can" and "sing her heart out for you." These days, she helps out with the worship team at Mount Hope Christian Church.

For many years, Hanning was active in performing at the Historic Fayette Theater in Fayetteville. Under the direction of Gene Worthington, she feels "very fortunate to have played the lead role of Vera Sanders alongside the late Shirley Love as Burl Sanders in the 'Smoke on the Mountain' series." That was the role that took Hanning to Wales in 2000 with the cast of "Smoke" to perform in five different cities as part of a cultural exchange program.

Her dream role, she said, came along in 2002 when she portrayed the late Patsy Cline, with Jan Neal as super fan Louise, in the show "Always, Patsy Cline." Another of her particular favorites was the show "Love, Loss and What I Wore," which was a readers theater-type show with an ensemble cast which advanced to state competition.

While she has performed at Carnegie Hall in Lewisburg and would have embraced performing on the stage at Carnegie Hall in New York City if the opportunity arose, Hanning said she'd "still much rather be at HFT looking into the eyes of (my) community of friends and family" to see her passion for her music or performance reach that audience.

More memorable performances occurred with Karen Vuranch in her murder mystery series. These shows were done at some West Virginia state parks. As part of the In Cahoots Players, they did regular murder mysteries for several years. These morphed into musical murder mysteries, which "were just great fun," said Hanning.

They combined two of her passions — musical performance and the opportunity to travel around the state. Goals she didn't get to fulfill were being a cast member on the Lawrence Welk show and doing a USO show with Bob Hope. "Neither was ever in the cards."

Hanning graduated from Collins High School in 1972 and went on to attend West Virginia Tech where she was, you guessed it, a music major. While at Tech, she met and married her husband of 47 years, Carl Hanning. They have two children and two granddaughters.

Her Collins High roots led to Hanning being a long-standing member of the Oak Hill High/Collins High School Alumni Association, in which she has held several offices. She was assistant treasurer under Velma Foster for several years and later was treasurer following Foster's death. She is also past president of the association, and she was the 2012 Grand Honoree.

With the help of statistics that were started by coaches Avis Partain, John Duda and Tom Mason, she published the "History of Red Devil Football," with the proceeds dedicated to a scholarship in memory of Partain. Hanning says she "wholeheartedly supports the association and their scholarship activity."

After working for 13 years at Plateau Medical Center — first in medical records and then for 10 years as secretary to the director of nursing — Hanning became a secretary at Tyree Funeral Home in January 1992. She wasn't the first member of her family to work for Joe Tyree. Her grandmother, Evelyn McLain, was the organist for almost every funeral service in the 1950s and 60s, said Hanning. And, if a soloist was needed, Merry's mother sang. Those scenarios meant Hanning "spent a great deal of time at the funeral home running around probably making a nuisance of (myself) as kids will usually do."

When her grandmother was no longer able to play for the services, her mother took on that job, and Hanning started singing for funerals at the age of 16.

Following the death of owner Joe Tyree in December 2020, Hanning became operations manager for Tyree Funeral Home. She had been Tyree's secretary for almost 29 years. She considered herself more than a secretary, but also a friend and, along with all the other employees at the funeral home, his family.

After Tyree's passing, Hanning was tasked with caring for the business, one she says she "loves almost as much as he did."

Hanning says she takes her job "very seriously" and is working "to ensure that the funeral home continues to operate just as Mr. Tyree would like."

She said she is honored that Tyree "placed his trust in her to see his wishes carried out. Mr. Tyree stressed dedication, professionalism and compassion. He knew almost everyone who came through the door. Knew not just them, but their parents and sometimes their grandparents.

"It wasn't just a job; he made it personal."

And that's the approach she takes. "When you work at a funeral home, you see people on what is probably the worst day of their lives — someone they love has died and whether it was by illness, accident or another way, (the) death is a shock. They need someone who has the utmost compassion."

Caring for the community runs deep in Hanning, she said. She's always been involved in community activities and organizations "in order to make Oak Hill a better place."

Hanning said she attempts to help the families that she cares for "to the very best of (my) ability." Of knowing many of the families the funeral home serves, she said, "You think that would make it easier but it doesn't, it actually makes it harder. You see because of these relationships knowing their hearts are broken, their pain touches me deeply."

"This past year-and-a-half have been such trying times for all of us due to the Covid pandemic," Hanning continued. "It has been especially hard for our funeral home staff."

Licensee-in-charge Jonathan Wood and Hanning have "had to make some hard decisions to keep the staff and families safe," she said. "No one knew what Covid was going to do, so restrictions were put in place that were not so popular and not easy for families to understand."

Hanning said it was difficult, but the right decisions were made. She said is "very proud" of the staff. "They rise to the occasion, going above and beyond as they continue to be here for those who place their loved ones in the care of Tyree Funeral Home. Their professional caring manner is what they call 'the Tyree way.'"

"The funeral business has changed a lot over the past 30 years," Hanning said. "You see less traditional and more same-day services, cremations are on the rise and attitudes in general about death and funerals continue to change.

"The funeral industry as a whole must evolve in order to survive."

And Hanning says it's her goal "to position the business in such a way that it will continue to be here for another 106 years."