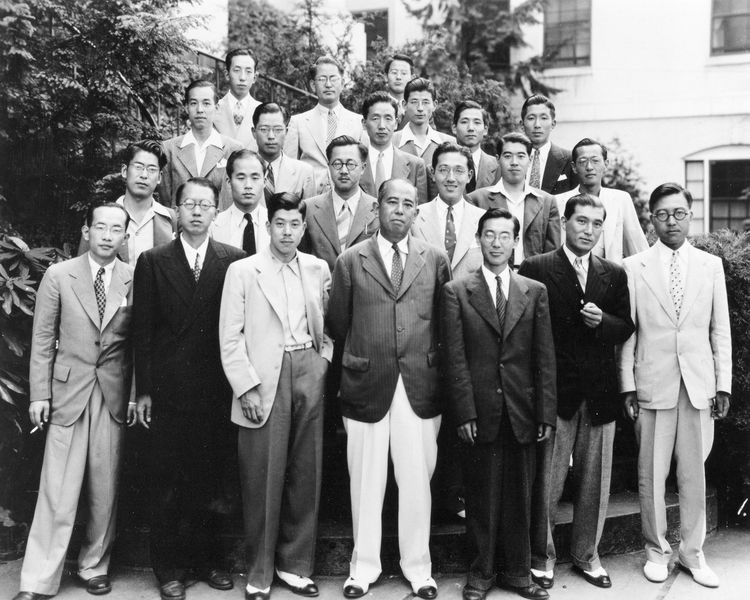 A group of Japanese detainees at The Greenbrier following their relocation from The Homestead. 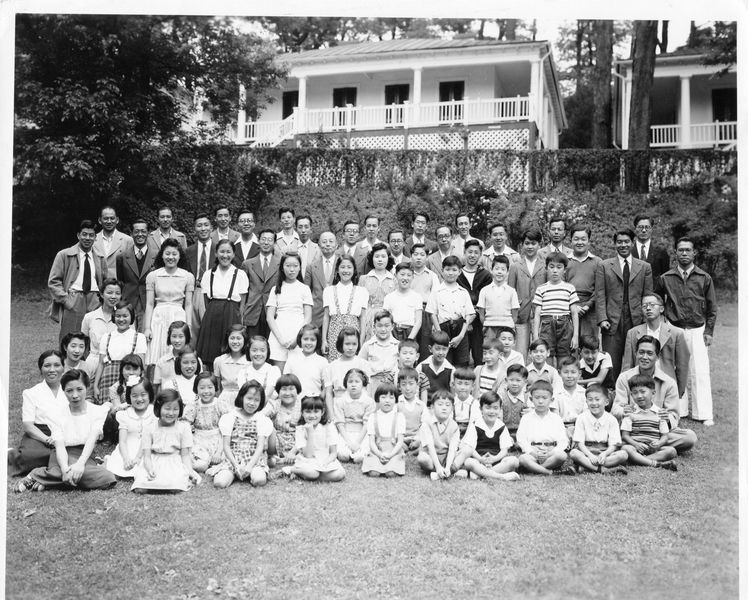 Schools were established to allow the detainees' children to continue education while at The Greenbrier. 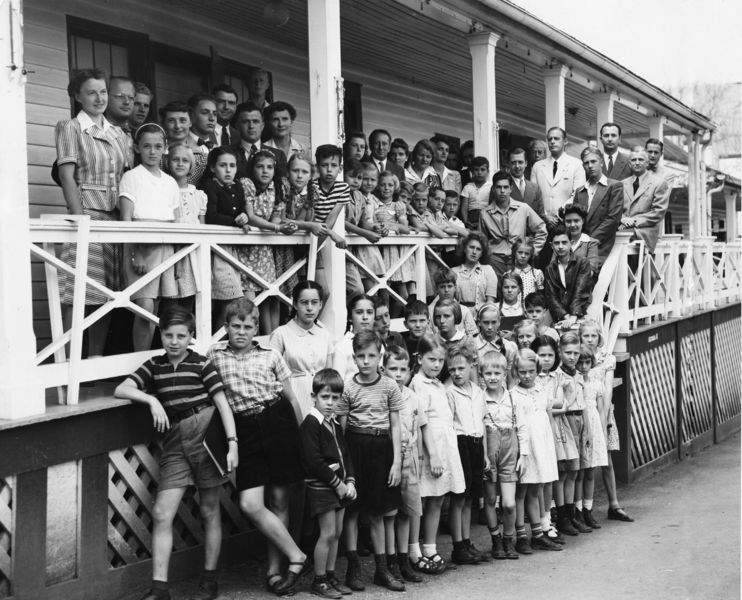 Schools were established to allow the detainees’ children to continue education while at The Greenbrier.

A group of Italian diplomats and their families gathered outside The Greenbrier. The Italians were later relocated to North Carolina as they did not get along with the German detainees. 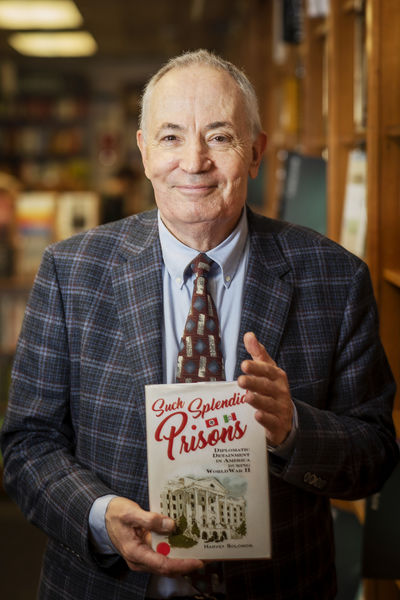 Photo by Craig Hudson"Such Splendid Prisons" author Harvey Solomon will appear at The Greenbrier for a presentation and book signing Saturday at 1:30 p.m. Solomon's book details the period of December 1941 through the summer of 1942 when The Greenbrier, at the request of the U.S. government, housed Axis diplomats and their families following the bombing of Pearl Harbor.

A group of Japanese detainees at The Greenbrier following their relocation from The Homestead.

Schools were established to allow the detainees' children to continue education while at The Greenbrier.

Schools were established to allow the detainees’ children to continue education while at The Greenbrier.

A group of Italian diplomats and their families gathered outside The Greenbrier. The Italians were later relocated to North Carolina as they did not get along with the German detainees.

Photo by Craig Hudson"Such Splendid Prisons" author Harvey Solomon will appear at The Greenbrier for a presentation and book signing Saturday at 1:30 p.m. Solomon's book details the period of December 1941 through the summer of 1942 when The Greenbrier, at the request of the U.S. government, housed Axis diplomats and their families following the bombing of Pearl Harbor.

When Japan attacked Pearl Harbor on Dec. 7, 1941, the shockwaves were immediate and vast.

The United States was at once at war with Japan and soon with Germany, too.

That’s when The Greenbrier was called into service.

It’s not a hidden part of the hotel’s storied history. It’s just one that’s sometimes overlooked.

Harvey Solomon, an author from Tacoma Park, Md., just on the outskirts of D.C., stumbled across a single sentence while doing research for a screenplay that led him to the story.

“It said something to the effect of, right after Pearl Harbor, FDR wanted the (Axis) diplomats out of their embassies until they could be repatriated for American diplomats trapped overseas in Germany, Japan and Italy,” Solomon recalls.

And with that one sentence, his interest was piqued.

“I had never heard of this, so I thought I’d really like to know more,” he says. “Let me find a book and read it.”

But he quickly found no books had ever been written on the subject.

“So I decided to write it.”

Solomon says he can no longer find the sentence that started him on this journey to write “Such Splendid Prisons” almost six years ago.

But he’s read a lot of other information since then.

He says he had to be careful when researching online, as sources can get a little tricky to validate.

But he did run across an article written by a professor — who sourced his material — for Prologue magazine about 30 years ago.

That’s when he learned the story.

“That was a gold mine for me,” he says. “I was able to get enough (information) to get a toehold.”

Fortunately, Solomon lives within minutes of the Archives II of the National Archives and Administration in College Park, Md.

“I basically moved into Record Group 59 of the National Archives,” he says, explaining he spent countless days unearthing materials, some of which he believes had never been printed in a book before “Such Splendid Prisons.”

“That’s the keys to the kingdom,” he says of the archives. “I started there and looked through hundreds of materials.”

Through his research, Solomon learned there were three requirements for places to send the diplomats.

“It had to be isolated because they (diplomats) were totally incommunicado,” he says. “It had to be reasonably close to D.C. because there was a lot of back and forth between government officials and the detainees.

“And, (lastly), it had to be nice. They wanted to put them in nice hotels.”

He says the State Department immediately honed in on The Greenbrier and The Homestead because of their proximity to D.C. and because government officials were familiar with both and had vacationed there.

“Cordell Hull was vacationing at The Greenbrier on Sept. 1 when Germany invaded Poland and started WWII,” he says of the former U.S. secretary of state.

If the 10-day window between Pearl Harbor and the phone call to The Greenbrier was quick, the two-day window from the call to the arrival of the Germans in White Sulphur Springs was even quicker.

“It was a slow time of year for The Greenbrier (back then),” Conte says, so the timing was good.

When the Germans arrived on Dec. 19, the hotel was up and running, with full staff as usual, but closed to all guests until their departure.

Solomon explains it was also decided that the Italians would go to The Greenbrier with the Japanese going to The Homestead.

“But the Germans and Italians got along like cats and dogs,” he says, “and from the opening bell, there was a lot of animosity between them.”

Eventually, in April, when The Homestead wanted to open for the spring season, the government moved the Italians to Grove Park Inn in Asheville, N.C., and brought the Japanese from the Homestead to The Greenbrier.

They chose The New York Times.

Solomon’s research also led him to visit The Greenbrier, where he met with Conte, who opened up the hotel’s archives, pulling photos and sharing everything he had learned from 40 years on the job.

He discovered detainees' memories and learned of their fondness of the hotel’s food.

“’Rolf developed a lifelong taste for orange marmalade,’” Solomon says, recalling a sentence from one of the letters written by a German.

And he laughs as he recalls a story he learned about the German delegation’s birthday party for Hitler, “As one of the waiters described ‘it as a Hell of a hail of heils.’”

No one knew how long the interment would last — whether the diplomats and their families would be sent back to their countries within days, weeks, months or whether they would remain until the end of the war. Schools had been established on hotel grounds.

Solomon says boredom became a problem as the main form of entertainment was shopping at The Greenbrier’s many stores.

And Conte says they were sometimes emptied out as the diplomats loaded up on supplies, not certain of the circumstances that awaited them at home.

Eventually, in July 1942, the last of the Axis diplomats left U.S. soil.

“They left on luxury liners, painted white and the words (diplomats) in Swiss,” Solomon says, “because the Atlantic was lit up with German U-Boats.”

“Such Splendid Prisons” is about each location — The Greenbrier, The Homestead, Grove Park Inn, the Hershey Hotel in Pennsylvania — and contains photos, stories, stories from detainees who were children at the time and other information previously lost in time.

Solomon, who will appear at The Greenbrier for a talk and book signing at 1:30 p.m. Feb. 15, says he’s happy to have had the chance to learn about and to tell these stories.

“I don’t pretend to say this story changed the war but it was the most extraordinary time for some ordinary people,” he says. “And for anyone in West Virginia, or that area, this is your history.”

"Such Splendid Prisons" is available at The Greenbrier, at The Open Book in Lewisburg and on Amazon.

Solomon recently appeared at a full-house book signing at Politics & Prose, the top Indie bookstore in Washington, D.C. The event was filmed by C-SPAN and will be online in the near future.