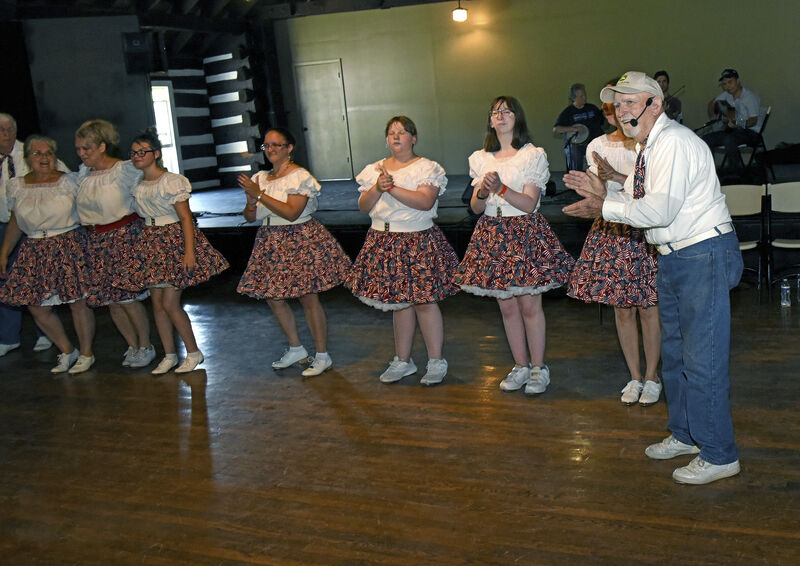 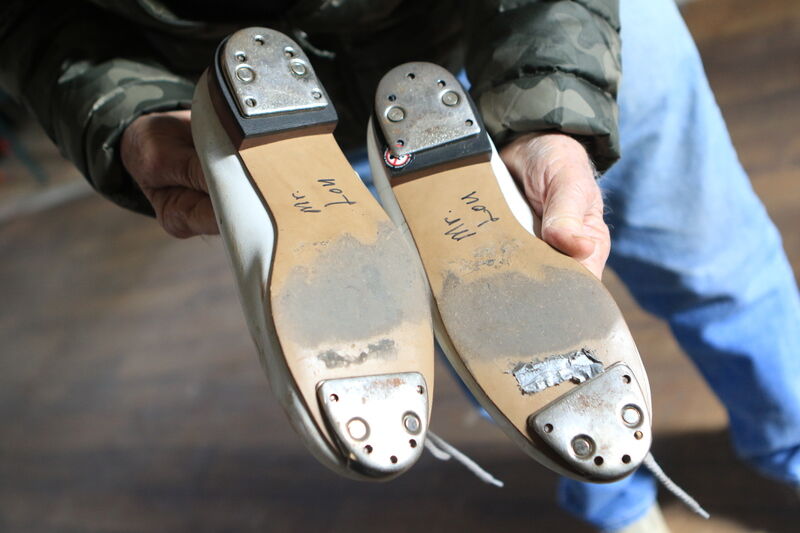 There are a lot of miles on Lou Mauiri’s well-worn clogging shoes. 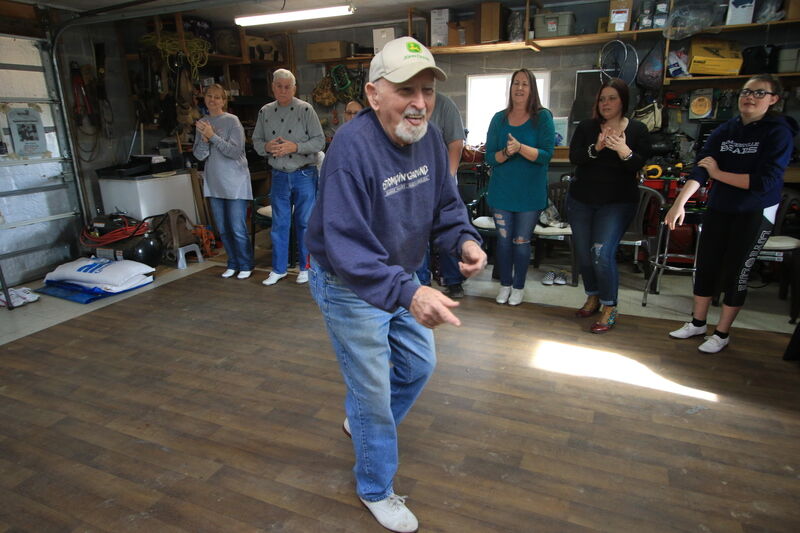 There are a lot of miles on Lou Mauiri’s well-worn clogging shoes.

It looks like any other garage, from the outside. But inside, a row of chairs sits just across from a wall of mirrors. Under one of those chairs rest two pairs of shoes — the kind with taps. And between those chairs and the mirrors lies a dance floor. Ninety-one-year-old Lou Maiuri walks past fishing rods and tools on his way to the heater. He needs to warm up his garage before the rest of the dancers arrive on this cool Sunday afternoon in Nicholas County.

As he ties his well-worn but still white clogging shoes, the dancers — many of them members of the award-winning Appalachian Country Cloggers, directed by Lou — enter a few at a time. Old friends. Young students. Some drove from just a few miles away. Others a few hours. One from North Carolina. There are a dozen or so, and they’ve all come to learn from, practice with, and move to the traditional commands of West Virginia’s oldest professional square caller, who also happens to be an award-winning clogger, a world-renowned master flatfooter, and a certified instructor and judge.

The dancers warm up with a little Southern Appalachian square dancing — “not Western square dancing,” he points out before hitting the play button on his garage stereo. “That’s different.” They follow up with a team clogging routine he choreographed (or “wrote,” as the cloggers put it), then some flat-footing, even a little buck dancing — which is a traditional dance somewhere between tapping and clogging. It all depends on where the dancer distributes the weight of his or her foot. Cloggers tend to keep the foot flat, whereas tappers keep their weight on the ball of the foot. Lou could explain all the technical differences, but he’d rather just demonstrate.

After all, he’s been dancing longer than anyone in the garage.

“Well, I’ll tell you how I really got so interested in it,” he says. “I’ve been dancing since I was young teenager in high school, and I always liked old-time string music. I really got into old-time dancing back when I was 18 or 19 years old.”

It was around that time that Lou’s brother broke his ankle playing football and wound up in the Montgomery hospital for several days. (“Back then, they wouldn’t let you go home so quick with a broken leg.”) In a nearby hospital bed rested an old-timer from Pocahontas County. That man struck up a friendship with Lou’s father, Giosafitti, or “Joe,” an Italian immigrant who had originally settled in Pocahontas County when he came to America at the age of 16 to work the lumber and rails of Cass. Once everyone was out of the hospital and well, Joe and Lou made a trip to Pocahontas County to visit their new friend and Joe’s old stomping grounds.

Lou and the man’s son, Wayne Jackson, hit it off and spent many an afternoon near the Williams River, where the sounds of fiddles and banjos flowed as freely and naturally as the trout streams.

“That’s when I really got interested in the old-time music and dance,” Lou says, “back up there on the head of the Williams River.”

Oh, he’d liked those sounds before. He had heard them and loved them enough to even learn to play the 5-string banjo a little, at least as best he could with part of a finger missing. (His brother had accidentally cut it off when Lou was just a youngster.) But like any teenager living in the city, he had been wooed by the modern sounds and moves of the jitterbug.

“I really got into the modern dance, the jitterbug, the stuff like that,” he says. “Me and my sisters and my brother, we all liked dancing growing up in high school, and we were really good at it. We could teach the other kids to do it because I could dance the male and the female parts. I could dance backwards.”

They came by their dancing abilities naturally.

“Our parents, they did the old-time dances, the step dances that they brought from the old country. They did the polka and stuff like that,” he says. “ … We all liked dancing growing up. And we all loved music. My brother and sisters took piano lessons. Dad thought music was important.”

The Maiuris also valued education. Lou remembers his father graduating from New River State College, the predecessor to West Virginia Tech, which is now WVU-Tech. He studied English and economics. He wanted Lou to study beyond high school as well.

And although family lore has it that Lou first admired his wife-to-be from atop a telephone pole where he was working in Glasgow, Lou admits Jessie was actually dancing the first time he ever saw her.

“She was a good little jitterbug dancer,” he says. In 1950, three years after he graduated from Montgomery High School, he married Jessie. They raised two daughters and recently celebrated their 69th anniversary at the home they made in Summersville 20 years ago. (Today, Jessie watches the dancers from a chair in the garage.)

The popularity of the jitterbug may have faded, but Lou’s love for mountain music and the movements that accompanied it lived on. He continued visiting his Pocahontas County friends. Sometimes he’d take a turn on the banjo, but usually he played in the rhythm section — with his feet, learning from those who did it best.

Of course, family and career eventually forced dancing into the backseat, but it would re-emerge decades later as a second career and send Lou all over the country as a performer, caller, teacher, competitor and judge. In 2008, the state presented him with its Vandalia Award, for being a nationally recognized ambassador for West Virginia’s folk heritage.

He can clog with the best of them and has the trophies and America’s Clogging Hall of Fame plaques to prove it. He can call squares — and continues to do so at events like Charleston’s Vandalia Festival, the Augusta Heritage Festival, and the Appalachian String Band Music Festival at Clifftop. And, when the fiddles and banjos move him, he carries on the Appalachian flatfooting tradition that was passed down to him near the headwaters of the Williams and that he has since introduced to people throughout the country.

It’s important to carry on that tradition, says Shirley Morris, who has accompanied Haylee Lewis to Lou’s garage class on this February Sunday, which happens to be Haylee’s 13th birthday. When Haylee was even younger, she’d watch Lou and his clogging team perform at Kirkwood Winery’s Grape-stompin’ Festival.

“She kept saying she wanted to learn to do that, and then finally we let her take lessons from Lou, and she just fell right into it,” Morris says, watching Haylee, Lou and the rest of the team dance.

“One, two and bend the line,” Lou says, in time with the music — his voice not an interruption, but more like another instrument.

His own granddaughter, Jennifer Garrett, is on the dancefloor, too.

“Papaw has always been a dancer,” she says, recalling a time in kindergarten when she brought her grandfather to show-and-tell for a dancing demonstration and another time, in 1983 at Clifftop, when they each won their age divisions in mountain dance competitions. “Mamaw and Papaw always loved to dance. Of all the things he’s done, it’s bass angling and clogging that stuck with him all those years. Quite frankly, if it weren’t for clogging and dancing, I don’t know that he’d be in such good shape. It’s a lifeline for him, and to share that information and knowledge, to pass it on like he does, means so much.”

Joe Cooper of South Charleston, one of the state’s most respected clogging instructors and performers, has also joined the dancers in the garage. Lou credits Joe with teaching him to clog.

“We’ve been friends for 40 years,” says Joe, who gave Lou his first clogging lesson 40 years ago at the YWCA in Charleston. (Lou had been wanting to expand his traditional dance skills.) “He’ll be 92 on his next birthday, and it’s amazing. He acts like he’s 55 when he’s out here doing this stuff.”

Even Lou must admit dancing has something to do with his longevity.

“I’m sure that it’s kept me in good physical condition,” he said. “I do have some health issues. … I’m getting old and wearing out. I can’t do any of the high performance clogging steps that I used to do. I have to stop and rest. But I can still flatfoot dance with the best of them.”