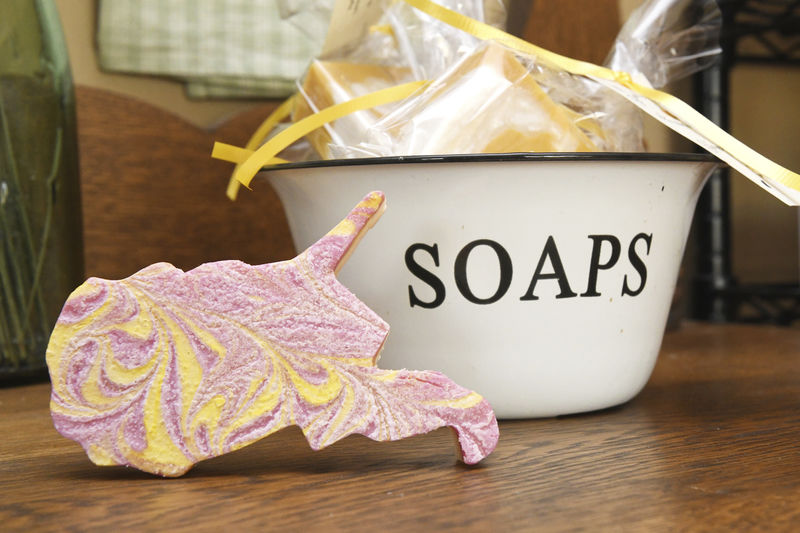 Beautiful Bee has a variety of handmade items which include lip balm, moisturizing products, scrubs, soaps, shampoo bars, and deodorants. 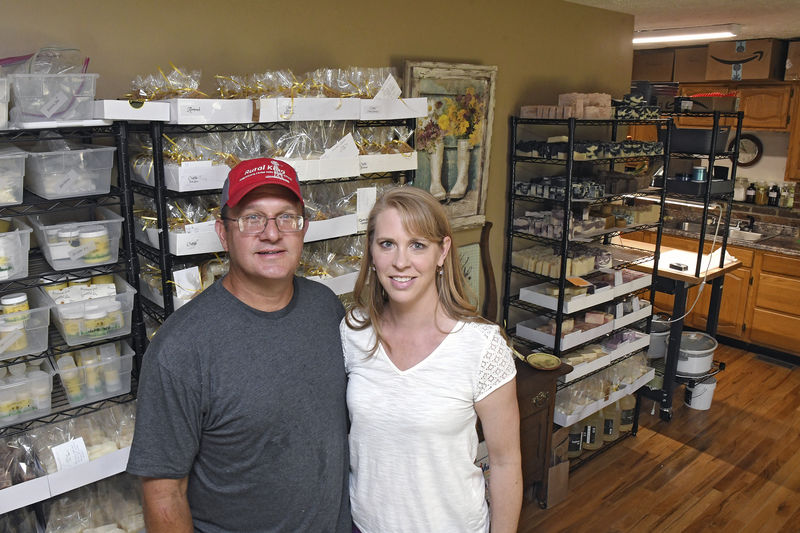 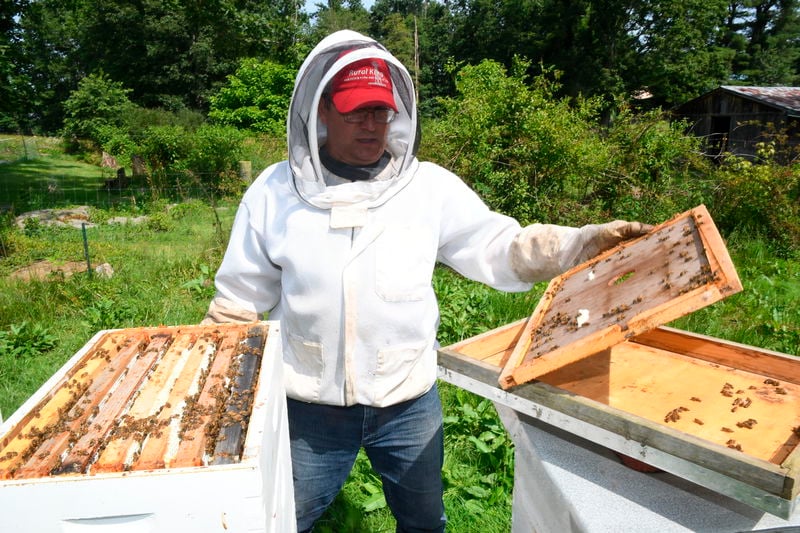 photos by Rick Barbero/The Register-HeraldAaron Kelly tends to one of his 12 honeybee hives, collecting ingredients for his wife April’s Beautiful Bee handmade beauty products. April Kelly, a beautician by trade, began the business in 2013.

Beautiful Bee has a variety of handmade items which include lip balm, moisturizing products, scrubs, soaps, shampoo bars, and deodorants.

photos by Rick Barbero/The Register-HeraldAaron Kelly tends to one of his 12 honeybee hives, collecting ingredients for his wife April’s Beautiful Bee handmade beauty products. April Kelly, a beautician by trade, began the business in 2013.

School bus driver Aaron Kelly slides a tray from one of his 12 hives and holds it up toward the sun.

It looks good enough to eat, and it is. But it won’t be. (Well, maybe a few irresistible spoonfuls will be enjoyed by a curious writer.) Most of this raw, unfiltered, nutrient-rich stuff will end up in Aaron’s wife’s specialized kitchen, bound for tubes of her handmade lip balm, moisturizing products, scrubs, soaps, shampoo bars, and deodorants.

Just a few yards away, indoors at their Lerona home, April Kelly beats a mixing bowl full of safflower oil, expeller pressed coconut oil, raw beeswax, raw cocoa butter, raw shea butter and vitamin E oil — the ingredients for her Bee Butter, one of the products she creates as the owner of April’s Beautiful Bee. She’s working in an apartment that was originally designed for her husband’s grandmother. Now, it’s where Beautiful Bee products come to life.

At first glance, this could be any tidy and well-organized kitchen, but hers is full of special ingredients — bags of dried flowers, jugs of coconut, olive and other natural oils, and jars of essential oils. You won’t find a loaf pan, but you will find a loaf mold near soaps in various stages of curing and hardening. Shelves are lined and labeled with fresh-cut soaps she’s made in a variety of natural colors that smell of things like rosemary, jasmine, honeysuckle, vanilla, lavender, blackberries, almonds, oats and honey. On another set of shelves lip balms, deodorants, sugar scrubs and headache sticks await labeling or shipment to customers.

They don’t just smell good, she explains. Those scents carry with them all the benefits such plants and oils provide skin — a tea tree oil and rosemary blend for itchy poison ivy, for example, or peppermint and frankincense for inflammation.

“There’s something for everyone,” April says. If someone needs a product with no scent, she has those, too. Castile? Yes. How about a lip balm with no shine? Absolutely.

At first, though, it was something just for her.

“I started it out of necessity,” she explains.

A cosmetologist, April’s hands needed something that would not only heal existing cracks, but protect her hands from further damage as she worked daily with hair dryers and hair products. She wanted something natural, with simple ingredients she could pronounce. And she wanted something that would soothe, restore and protect. When she couldn’t find what she wanted, she went back to her roots — the ones established by ancestors who lived off the land in Summers and Mercer counties. The result was Body Balm, made from raw shea butter, raw cocoa butter, coconut oil and raw beeswax. She even figured out how to put it in a solid disc form, simple to pick up and rub between hands as often as she pleased, although she quickly learned it worked wonders on dry, cracked heels, too.

But the necessity didn’t end with her own needs. Three daughters at home requested lip balm. And a client of hers who is a nurse wondered if instead of April’s Body Balm discs and rub-on sticks, it might be possible to have some of the same beneficial ingredients in a different form, a creamy one she could apply after each of the many hand-washings she did each day. Thus was born Bee Butter.

From there evolved natural deodorants in a variety of scents, sugar scrubs, even a headache stick with eucalyptus, camphor and lavender essential oils. In fact, Beautiful Bees’ demand for beeswax products has exceeded what the Kellys’ own bees can produce most years, so they buy a little extra from a veterans group in Hedgesville.

“We still want to keep it as local as we can,” April says.

Giving a modern twist to the old ways, she and Aaron say, they’re just doing what generations before them did. Aaron’s grandfather and dad were beekeepers, among other homesteader-type things. In fact, the cabin at the Nature Center in nearby Pipestem State Park belonged to his grandfather. His not-so-distant ancestors lived on a farm on True Road and would peddle honey, piecework and produce from their farm between their home and Hinton.

“I guess in a way, we’re carrying it on,” April says. She may not be peddling wares along the road, but she is selling her products at seven West Virginia State Parks (including nearby Pipestem), three stores, two hospital gift shops, and her beauty salon, Style Unlimited, where she continues working full time, serving clients from the Lerona-Speedway area.

Turns out Bee Butter is also a good hair product for those with hair that tends to frizz, she notes. On a humid day, after you apply Bee Butter to your skin, smooth your hands over frizzy hair to tame it. Grace Kelly, a daughter, is a big fan of her mother’s Bee Butter for that and other reasons. She says she’s used it for a child’s diaper rash. “And I’ve even used it on my dog,” she says, explaining how it helped an injured paw pad to heal.

As for herself? “My skin used to be horrible,“ Grace says. “I had acne. I took medicine. Nothing helped.” Nothing, that is, until her mother made her a tea tree oil and rosemary soap and a charcoal soap.

It may be an opinion from a family member, but the Aprilsbeautifulbee website — where products are available for purchase — is full of similar comments, and April loves reading them.

“I have a passion for wanting to help people feel better, and feel better about themselves,” April says. She points out a faint scar on her upper chest, where she had a pre-cancerous spot removed. She credits Bee Butter for reducing the scar’s appearance.

She welcomes customers to speak to her one-on-one at vendor events she attends. (Summer vendor events are often too hot to keep the products at their ideal consistencies, so look for her at events in fall, spring and winter.) “If they talk to me, I can help them find just what they need,” she says.

Questions emailed through the website (aprilsbeautifulbee.com) or on Facebook (Beautiful Bee) are welcome. The Facebook page also gives visitors a close-up look at the bees behind the products.

In the meantime, April and the entire family — it takes all of them to run everything from the hives to the labeling and shipping — continue carrying on the old ways in a modern world. Their bees live near free-ranging chickens and pollinate nearby holly bushes and fruit trees. There’ll be apple butter and pie filling to can come fall. And the summer’s garden crops are certain to result in plenty of jars of salsa.

“We’ve got to carry it on. People don’t know how to do things anymore,” Aaron says.

April may carry on traditions of the past, but she’ll also continue working toward the future, experimenting in the kitchen with combinations of healthy, natural ingredients. She’s working on a new lip balm tinted with beet powder.

Edna Marie, died Jan. 15, at home, a short illness. A memorial service will be held later at Ramp Holiness Church. Cremation was honored and burial at her home place. Arrangements by Ronald Meadows Funeral Parlors, Hinton.