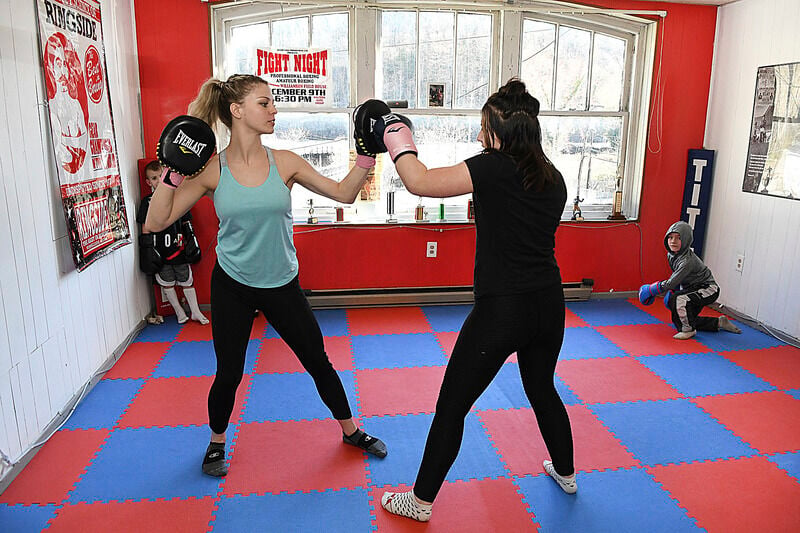 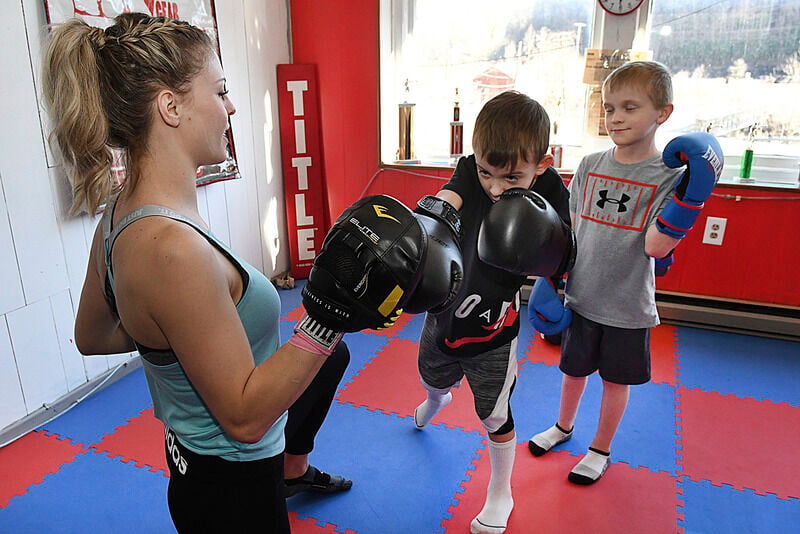 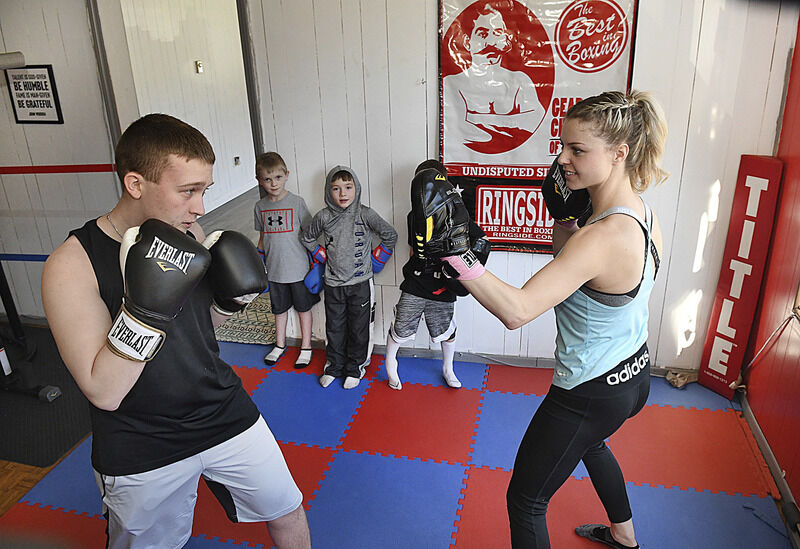 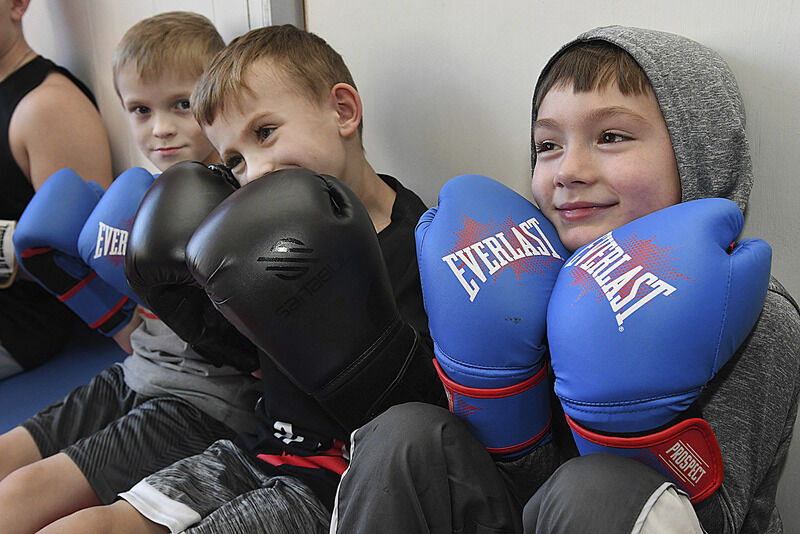 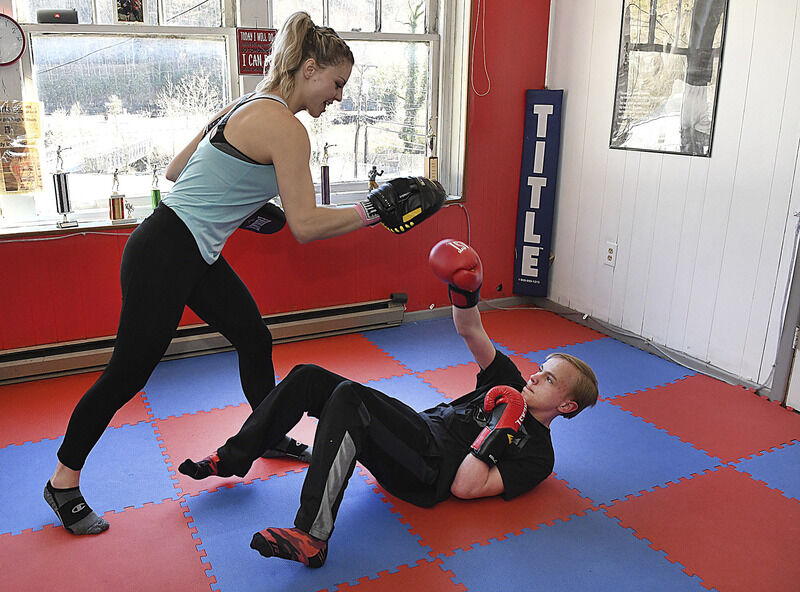 Hope McNeely, owner of A-Train Boxing & Fitness Studio in Mullens, teaching Joshua Tilley how to defend himself on his back.(Rick Barbero/The Register-Herald) 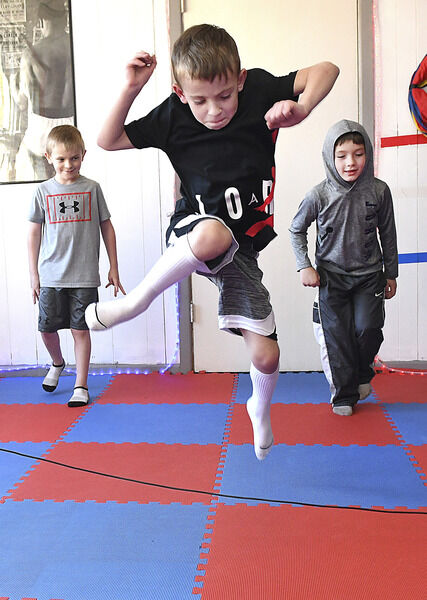 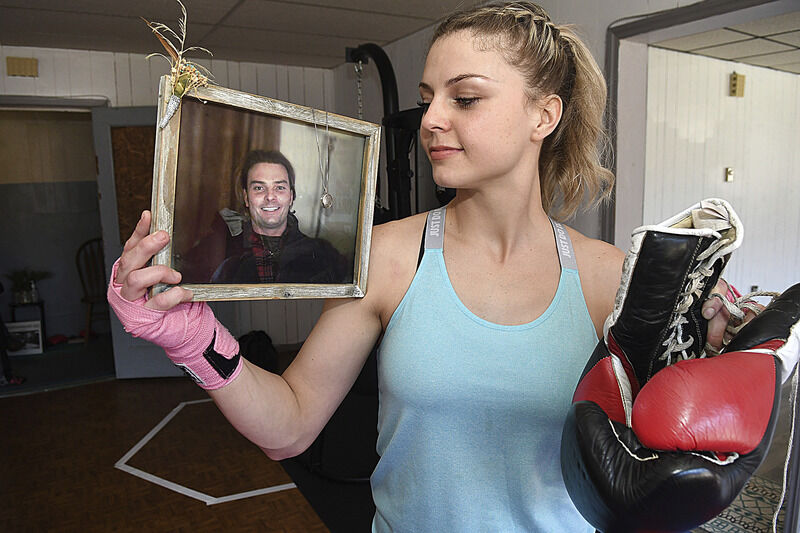 Hope McNeely, owner of A-Train Boxing & Fitness Studio in Mullens, holds a picture of her brother Ashley McNeely and his boxing gloves in her gym. Ashley passed away May 2, 2017.(Rick Barbero/The Register-Herald) 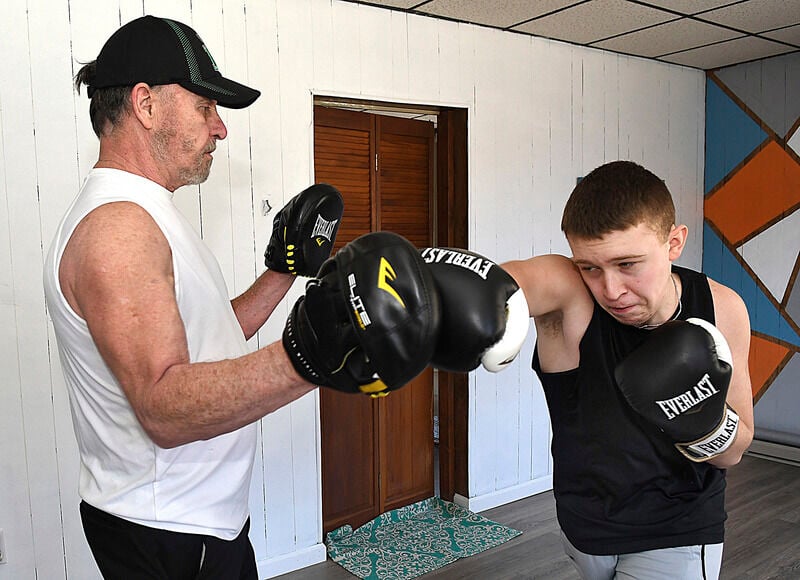 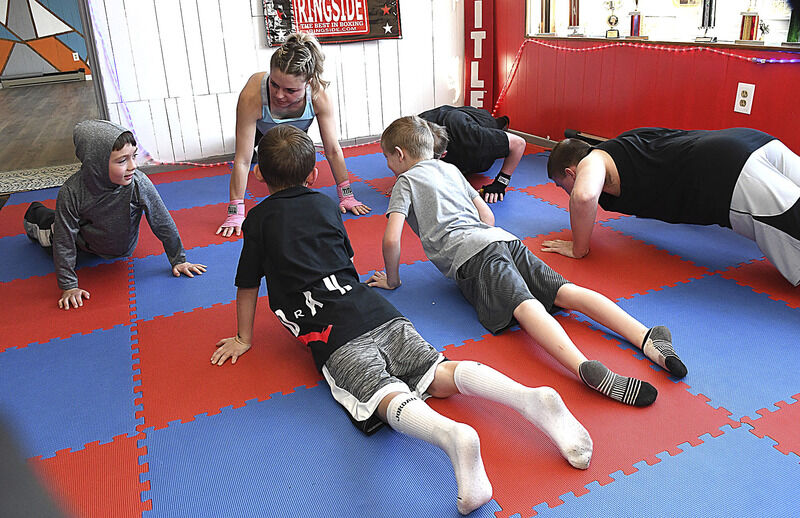 Hope McNeely, owner of A-Train Boxing & Fitness Studio in Mullens, and her class doing push-up during a workout in her gym.(Rick Barbero/The Register-Herald) 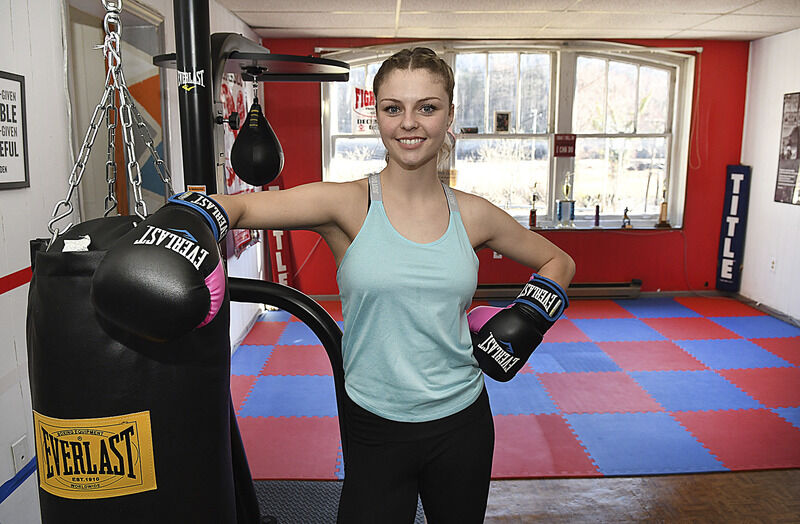 Hope McNeely, owner of A-Train Boxing & Fitness Studio in Mullens, teaching Joshua Tilley how to defend himself on his back.(Rick Barbero/The Register-Herald)

Hope McNeely, owner of A-Train Boxing & Fitness Studio in Mullens, holds a picture of her brother Ashley McNeely and his boxing gloves in her gym. Ashley passed away May 2, 2017.(Rick Barbero/The Register-Herald)

Hope McNeely, owner of A-Train Boxing & Fitness Studio in Mullens, and her class doing push-up during a workout in her gym.(Rick Barbero/The Register-Herald)

Hope McNeely was working in Charleston and well on her way to becoming a veterinarian when her brother’s unexpected death turned her world upside down in 2017.

But the Mullens native and three-time Toughman champion fought back, refusing to let her brother’s dream die with him. Now, the 26-year-old has returned to her hometown and opened a studio gym with private and group classes in boxing, self-defense, martial arts, and fitness for ages 3 and up.

She named it A-Train Boxing and Fitness Studio, for her late brother.

“The whole gym, everything about it, is dedicated to my brother,” she said.

Ashley McNeely – “A-Train,” as friends nicknamed him after witnessing his strength as an athlete – was the first child boxer from West Virginia to compete in the national Junior Olympics. He won the National Regional Golden Gloves Boxing Championship at 15. A few years later, in 2001, he earned the Sam Huff Award for W.Va. High School Defensive Player of the Year as a student at Wyoming East.

From there, he went on to play for Marshall University and the WV Storm football team. Along the way he participated in Mixed Martial Arts, served as a boxing referee for the WV Athletic Commission, and taught skiing at Winterplace – all of it with a passion for teaching and helping children with their own athletic pursuits. He dreamed of opening a gym for them some day.

“All around, he was just the best athlete,” Hope recalled. “He was a special education teacher in Fayetteville. He impacted the youth so much, coached football, and really helped kids in this area. He helped me, as well. We had a lot of aspirations to open a gym, just so kids here can have the same opportunities we did.”

Hope and Ashley’s own athletic opportunities came from local sports teams and their father, Butch NcNeely, whose professional boxing career included the first televised match on the new FOX network and some 140 others. Now he occasionally lends his coaching expertise to clients at A-Train, which is located in the studio just above his State Farm Insurance office in an historic Mullens bank building.

Unlike street-level gyms, McNeely’s studio is on a second level, above a business, much like dance studios found in larger cities.

“When you’re on the ground level, people stop and look and disrupt,” McNeely said. “I have classes for women, younger girls, teenagers, and they don’t have to worry about people driving by or walking by and looking at them. It’s private, comforting and safe.”

It’s unique in other ways, too.

“It’s different, my gym,” Hope said, explaining that she’s seen more than a few gyms in her semi-pro fighting career, which includes MMA and boxing — she’s 14-0 with 12 knockouts and a professional fight coming up in Miami in July. “I want kids to come through these doors and feel like they’re home. Just let out their anger, their frustration, just escape.

“One thing my brother always said was that – not just for kids, but adults, children, toddlers, anyone – just punching a bag releases so much,” she said.

She has combined his advice with what she’s learned from her psychology classes as she seeks her master’s degree in special education from Western Governors University online: Make learning fun and always end class on a positive note.

“I go around to each kid and ask, ‘What do you like about yourself?’ Not, ‘What would you change?’ But ‘What do you like?’ And each kid will say something positive. … It’s not even so much about the boxing, but about children and people being fit.”

McNeely said that although she can and does train fighters, she also loves teaching children’s and women’s boxing fitness and self-defense classes.

“A lot of people may get scared when they hear the word, ‘boxing,’ but it’s not black eyes. It’s not busted lips. It’s like having a spare tire in your car. You are learning these defensive moves just in case something happens. You are learning how to react. You’re not learning how to beat someone up. You’re learning life skills,” she said. “Nobody is punching each other. The women are working out, running in place, doing squats, using mitts, it’s strictly a fitness class but with boxing gloves. And it’s a great way to lose weight.”

Self-defense classes are another option.

With kids, McNeely not only teaches self-defense moves, she simulates them getting kidnapped – complete with a creepy van and tempting opportunities. Likewise, teenage female students learn how to deal with “mean girls.”

“I will simulate that I am about to fight them, but nobody is getting hurt,” McNeely said. “I run at them, swing, and they hit me. I want them to know what it feels like in a real situation.”

Women also get the experience of practicing using fake pepper spray in response to a simulated purse snatch acted out by McNeely’s husband or father.

“I want them all to instinctively react and be able to defend themselves,” she said. “The majority of my people are kids who are bullied in school, and they do amazing in this gym.”

As a class comes to a close, and the kids reflect on what they like about themselves, McNeely points out to them that everybody is different. “I tell them that’s super important because one kid might be stronger and another kid might be faster, but one of those things is not better than the other. ‘You are all talented in different ways, but you are equally as good.’ ”

Already her children’s classes have grown from 15 to 60 students in only two weeks, but her boxing coach dad, friend Taylor Smith, and her husband, Addison Frame, are helping. Frame uses his business degree to help A-Train with marketing and management, and his blue belt in Jiu-Jitsu and his black belt in Tae kwon help students with martial arts.

For class information, visit the A-Train Boxing and Fitness Studio business page on Facebook, or call 304-923-3696. McNeely said she is working on a logo with a local designer and hopes to have a lighted sign in front of the gym soon. She also plans to provide information at the Dogwood Festival, in Mullens, May 5-9, which will include an A-Train-sponsored 5K run/walk and a kids’ bicycle race,

“I love this. It means so much to me that kids in this area can learn this. I just pray that it continues to build,” she said. “The more kids and people learn how to defend themselves, the less likely bad things will happen.”

McNeely added that the new Coalfields Expressway makes the drive from Beckley to Mullens much faster and that students are welcome to come from anywhere.

“And it’s a beautiful drive,” she said. “I would love to see that open up so many more opportunities in this town. We’re so blessed that we have this opportunity, and I just pray that more businesses will come here. It is a wonderful place.”