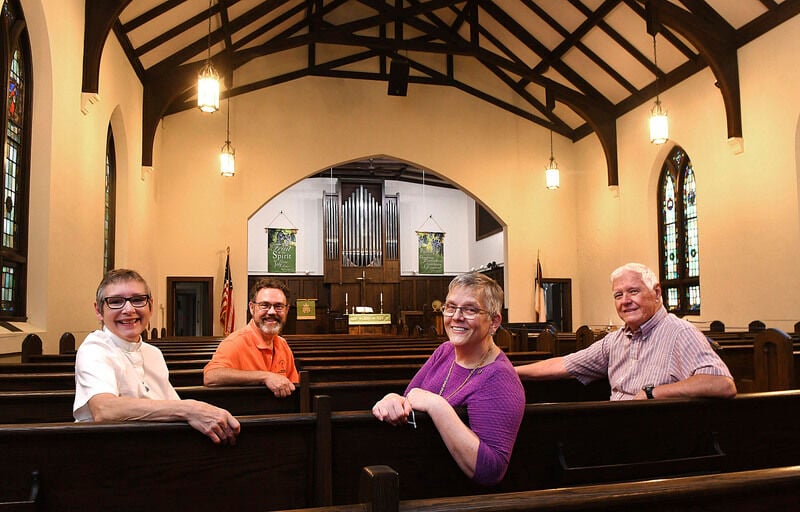 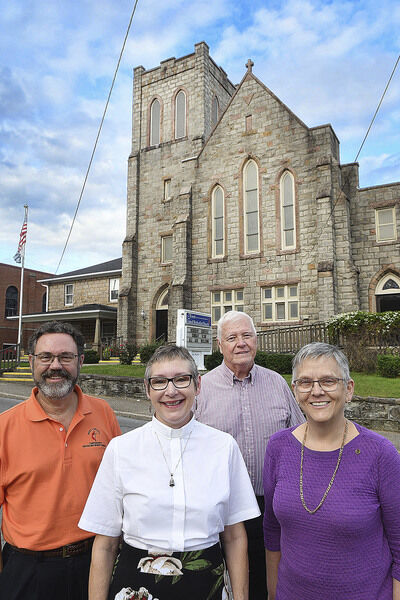 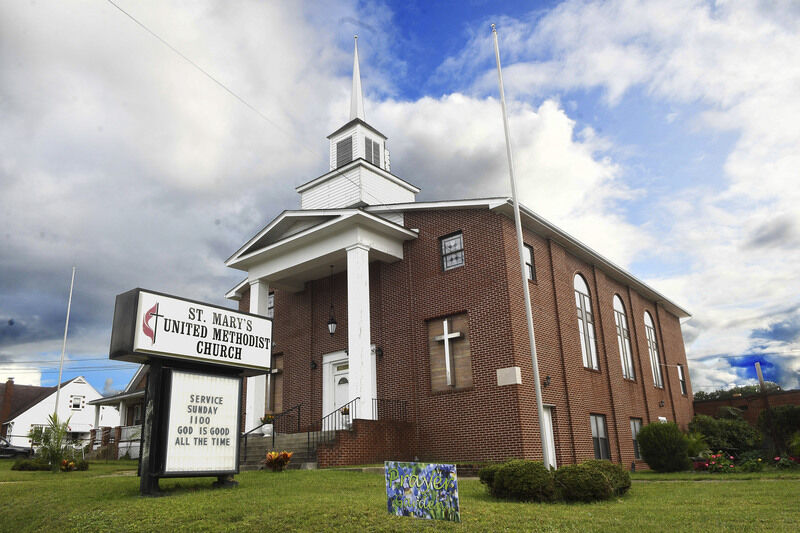 When Rev. Betsy Evans Ingstrup moved back to Beckley from Chicago in August, she never expected God’s call to be so loud and clear.

She found herself face-to-face with the city’s homeless, near her new neighborhood and on her new church campus.

“One of the incidents happened at the door of the former First United Methodist Church, so I don’t think God can get any more plain than to put a person in need right at the front doors of the church,” Ingstrup said.

The church helped the homeless person, and as urgent as the need may have been, it confirmed two things: Instrup was where she was meant to be, and a group of lay people from two dwindling churches had indeed chosen the right name for their new merged congregation, Beckley Community United Methodist Church.

“They are creating a new expression of ministry to extend his table to all the people in the community,” said Rev. Dr. Joseph Kenaston, the Southern District superintendent for the West Virginia Conference of the United Methodist Church.

“We’re much stronger together,” said Martha Wilkinson, the former lay leader of St. Mary’s and co-chair of the merger task force.

Beckley Community UMC’s vision statement is “to extend the Table of Christ to our community in innovative ways in order to spread the Gospel of Jesus Christ and strengthen relationships within the congregation and community we serve,” said Neal Lacey, the former lay leader of First UMC and co-chair of the merger task force.

“It’s where the members of the congregation have realized that they’re better together than they are separately,” she said, “and how much more they can do if they share their ideas and they share their hopes and dreams and vision of Christ.”

That they merged in the midst of a pandemic and a pastoral transition – Lieutenant Rev. Michael Potesta served both churches until he left recently for duty as a military chaplain serving the Navy and Marines – shows that God is still at work, Kenaston said. That they voted to merge even before they had decided on a name shows that they were committed to work together to serve their community.

“So we knew each other,” Lacey explained. “We had been working together. We were all connected, though not officially united in one church until now.”

For some time, it had been apparent that neither church was growing, Lacey said.

Wilkinson said she counted 14 people in attendance at St. Mary’s just prior to the pandemic and the temporary stop of in-person worship.

“Separately, we were dwindling,” Wilkinson said.

The shrinking number of congregants raised enough of a concern for her to approach the United Methodist Southern District Office about options.

Though talks of merging began before the pandemic, Covid-19 prompted a task force comprised of five members of each church to continue their discussions via Zoom. By the time Ingstrup joined their discussion, the grassroots laity team, with help from Kenaston, was well on its way to planning a vote for their respective church memberships. After an informational campaign and with social distancing guidelines in place, members were invited to drive up and cast ballots in person.

The merger passed overwhelmingly, with 90 percent in favor at one church and 93 percent at the other, Kenaston explained.

According to Lacey and a 1994 book he cited by Carl G. Wolfe – coincidentally titled “A Part of the Community” – First United Methodist’s history reaches back to 1850. That year, Raleigh County was formed from Fayette County, Virginia, and a Methodist Episcopal Church was formed at Raleigh Courthouse. Among its original members – General Alfred Beckley. His son, Neville, was later a pastor of the church, and another member, Stephen Hensley, served as a delegate to the Wheeling Convention, which began the work of forming the new state of West Virginia. That church met in several locations and was part of a circuit until the current Heber Street structure was built between Aug. 4, 1929, and March 23, 1930, under the leadership of the Rev. Minor C. Miles.

The Great Depression hit the area hard around that time, but the church survived by renting Sunday school classrooms as apartments and selling its new parsonage. Legendary high school basketball coach J.R. Van Meter lived in one of those apartments. By 1933, Beckley College was using the sanctuary and classrooms, and the church was on its way to solid financial footing. A series of pastors would help make the church a vital part of Beckley history.

St. Mary’s has a distinguished history, as well. It opened in 1923 under the leadership of three laymen from United Methodist Temple in a converted garage on the site of the current Rose and Quesenberry Funeral Home. By 1925, it was known as East Beckley Methodist Episcopal Church, South. Its first minister was J.S. Atkinson. The cornerstone for its current building was laid in 1930, and over the next seven years – with construction slowed by the Depression – the congregation met in a wet basement. In 1937, a grant helped the church raise funds to complete construction, but the church still had a considerable amount of money to raise. The women of the church raised money by creating a quilt on which they embroidered the names of those who contributed to their fundraiser. To honor those women, the church was renamed St. Mary’s UMC in 1942. But in 1947, their building burned. Once again, the congregation met in the basement until their building could be rebuilt.

The new pastor of the merged church appreciates those histories not only because of their importance to the community, but because she has her own ties to Beckley.

“I grew up in West Virginia,” Ingstrup said. “I was born in Hinton and my parents retired in Lewisburg, so southern West Virginia is my favorite part of the state, including the Hinton Dairy Queen.”

Her father, Rev. Dr. Ross Evans, was an elder in the West Virginia United Methodist Conference for 62 years. He served at Beckley’s United Methodist Temple when Betsy was a girl. She graduated from Woodrow Wilson High School in 1977.

Ingstrup moved from West Virginia at 21 and carried out a successful career with nonprofit organizations, including the American Academy of Pediatrics and dealings with child poverty issues. She attended Garrett-Evangelical Theological Seminary in Evanston, Ill., served local congregations near Chicago for 13 years, and is pursuing ministry as a provisional deacon for the United Methodist Church.

“It’s all about service, compassion and justice, so my background of 20 years in nonprofit ministry collided with my identity as a deacon,” Ingstrup said.

And surprisingly, the same big city problems she witnessed in northern Illinois – namely homelessness and drug use – collided with her return to Beckley.

“Beckley has changed so much. It’s like I’m getting reacquainted with the area all over again,” she said, “but it has been a blessing working with these congregations. They’ve really become one.”

She noted that their name choice seems appropriate, and Lacey pointed out that both campuses are surrounded by people with spiritual and physical needs.

“Separately, we really weren’t serving them very much other than offering them an occasional meal,” Lacey said. “… We’re in the middle of a huge mission field, especially on Heber Street. The harvest is plentiful but the workers were few.”

As a merged body, the new church retains ownership of both campuses. For now, they’ve chosen to meet Sundays at 11 a.m. at their Heber Street campus, where a larger sanctuary makes social distancing possible. (Masks are required.) The South Kanawha Street campus could be used for meetings and activities, post-Covid.

“It’s not just a merger. It’s a restart, with a vision for ministry,” Kenaston said.

“We have just been feeding off each other’s joy and excitement of creating a new church,” Ingstrup said, adding that they already have a running joke that anyone who uses the old church names instead of Heber Street campus or South Kanawha Street campus when referring to the new church must deposit $50 into something like a swear jar. “So we’re truly one congregation, and the joy is evident and overflowing. I’m just so pleased to be a part of their ministry.”

She invites all to worship with them at the new church in the historic Heber Street building Sundays at 11, with masks and social distancing guidelines in place. Alternatively, services are recorded and available to view on Facebook.

Beckley Community United Methodist Church will host a special Consecration Sunday on Sept. 20 at 11 a.m. Bishop Sandra Steiner Ball is expected to speak at that time, and the church plans to collect items and monetary donations for its first community mission project — Pine Haven Homeless Shelter.