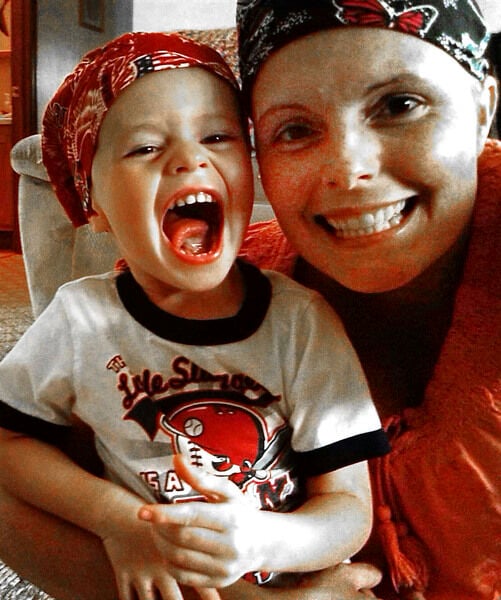 After she shaved her head, Noah Ewing began wearing a bandana alongside his mom. She said they called themselves the "bandana twins." 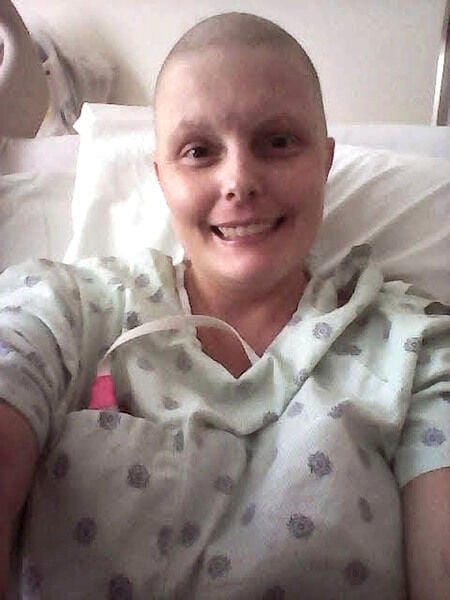 Lorie Ewing while hospitalized for blood clots in her lungs in February 2015. 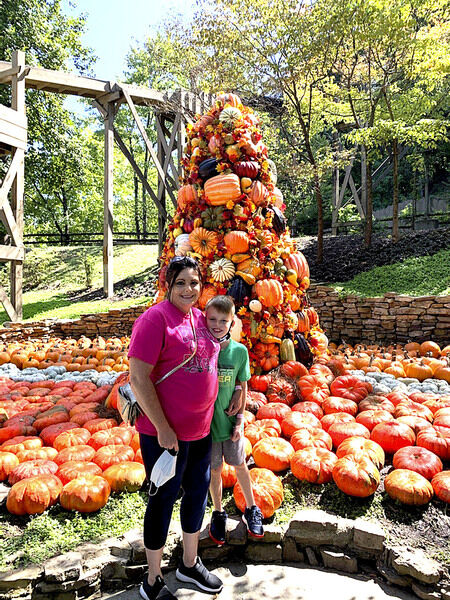 Lorie Ewing, pictured with her 8-year-old son Noah, was diagnosed with HER2-Triple Positive Stage 3 breast cancer in 2014, when she was just 35 years old. After six months of chemotherapy, Ewing underwent a double mastectomy on Oct. 14, 2014, and is nearly six years cancer-free. 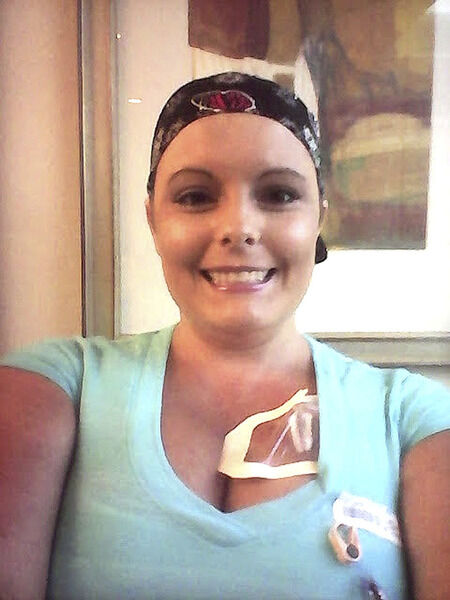 Lorie Ewing waiting for a chemotherapy treatment for breast cancer in Huntington in 2014. Ewing underwent six months of chemo before receiving a double mastectomy. 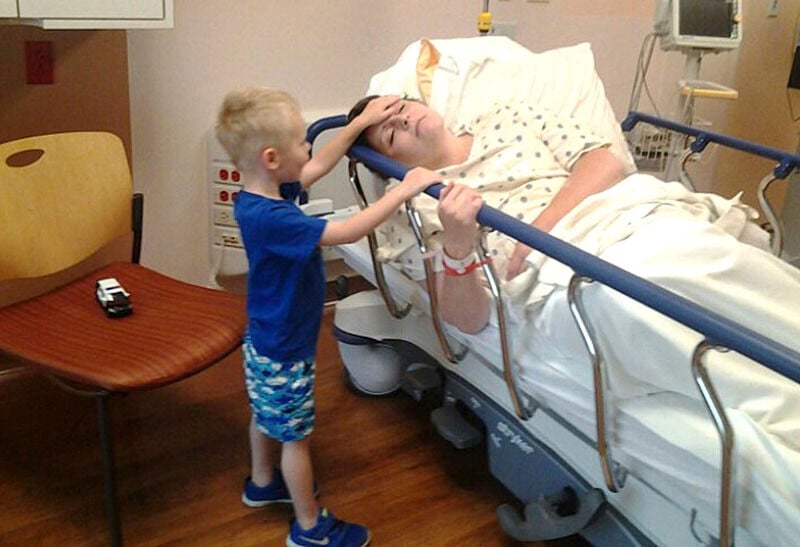 Noah Ewing prays by his mom Lorie's bedside before her hysterectomy in 2015. 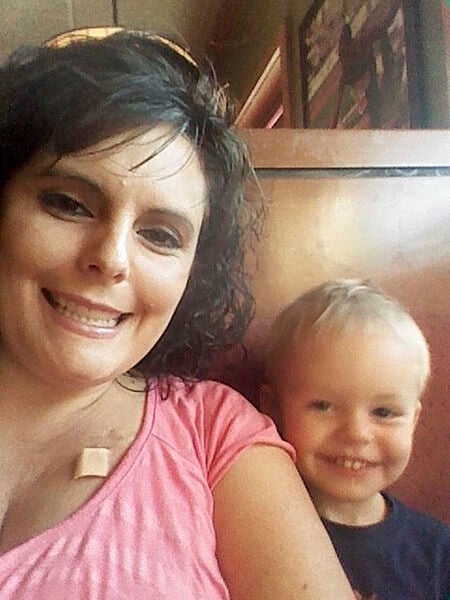 Lorie Ewing, with her son Noah, after her first chemotherapy treatment for breast cancer in 2014.

After she shaved her head, Noah Ewing began wearing a bandana alongside his mom. She said they called themselves the "bandana twins."

Lorie Ewing while hospitalized for blood clots in her lungs in February 2015.

Lorie Ewing, pictured with her 8-year-old son Noah, was diagnosed with HER2-Triple Positive Stage 3 breast cancer in 2014, when she was just 35 years old. After six months of chemotherapy, Ewing underwent a double mastectomy on Oct. 14, 2014, and is nearly six years cancer-free.

Lorie Ewing waiting for a chemotherapy treatment for breast cancer in Huntington in 2014. Ewing underwent six months of chemo before receiving a double mastectomy.

Noah Ewing prays by his mom Lorie's bedside before her hysterectomy in 2015.

Lorie Ewing, with her son Noah, after her first chemotherapy treatment for breast cancer in 2014.

“It was 2010, and I was working at Stepping Stones (day care) in Beckley and a little child leaned back and hit my chest with his head and it really hurt,” she said. “Like it always hurts when something hits your chest, but this hurt more than that.”

Ewing was just 31 and had no family history of breast cancer, but she made an appointment for a mammogram.

“They told me I drank too much caffeine and I needed to slow down,” she said of her result.

She did as she was told, but the pain persisted.

In 2011, Ewing gave birth to her son, Noah. Eighteen months later, when she finished breastfeeding, the same breast wouldn’t dry up and began to bleed. Still, she was told not to worry.

“Always, ‘the caffeine,’ they said,” Ewing recalled of what doctors told her when she’d express concern. “Always, ‘You’re too young.’”

By 2014, when Noah was 2 and a half years old, and she was still experiencing pain, a different doctor ordered another mammogram.

“I think she saved my life.”

And before the mammogram, while lying on her bed, Ewing inadvertently discovered three hard knots on her armpit.

The mammogram picked up something suspicious, too, and she was called back for an ultrasound. By that evening, she said the radiologist called her for more testing.

This time, he saw three places on her breast, as well as the three spots she’d felt on her lymph node under her arm.

“He did an ultrasound and biopsy and before I left I asked him what he thought and he told me he thought it was cancer,” Ewing said.

And that proved to be right, as on April 23, 2014, at just 35 years old, she was diagnosed with Stage 3 HER2-Triple Positive breast cancer.

“That’s when the journey began,” she said.

Ewing said it was recommended that she seek treatment in Charlottesville, Huntington or Morgantown – whichever hospital could see her the quickest.

On the following Monday, she was at the Joan C. Edwards Cancer Center in Huntington, where she learned she would need to receive six months of chemotherapy before undergoing a double mastectomy.

“They told me it was going to be a long process, and they would have to shrink the tumors before they would remove the breast,” she said. “Actually, both breasts. I would have to have a double mastectomy.”

Ewing, who was going through a divorce at the time of her treatment, said she considered giving up following her first treatment.

That’s when she said her mom reminded her of her family and of Noah, who chose that moment to make an appearance.

“She said, ‘Lori, I can’t make you do it. You’ve got to think of the ones who love you,’” she said. “Then all of the sudden, here comes this little arm. It’s Noah, and he comes in the bed and puts his arm around me, and I knew I needed to do it, and I did.”

Although learning she would need a double mastectomy to save her life was difficult to hear, Ewing said, at the time, it wasn’t the most difficult part of her journey.

“I didn’t cry about that part because I felt like I had done my duty and was finished breastfeeding Noah,” she said. “But when they told me I would lose my hair, I cried about that part. I hit a brick wall.”

The hair loss began in a Huntington hotel room the evening after her third treatment.

“It started coming out in gobs,” she said, recalling seeing hair all over the room. “There were just big bald spots everywhere.”

When she began treatment, Ewing had cut her long dark hair to the bottom of her earlobes. But the evening when it began to fall out on its own, she said it was more than emotionally upsetting, it was physically painful.

“It felt like someone was constantly pulling my hair out by the handful,” she said. “I had to make the pain go away, so I had it shaved.”

When she got home though, Noah, who understood she was sick, was scared by what he saw.

“Here comes my bouncing little boy running up to the car, but he took one look at me and turned around and left,” she recalled. “That killed me because the only reason I was fighting was for him.”

That’s when she said she explained to Noah she had only gotten a haircut and he could get a haircut, too.

“We became the bandana twins after that,” she said, explaining it comforted Noah to wear bandanas over his head, just like his mom.

Ewing said the chemo shrunk her tumors just as the doctors had hoped and, on Oct. 30, 2014, she underwent a double mastectomy.

She had the option, at the time, to have reconstructive surgery, but because she had lost nearly 50 pounds during chemo, she instead decided to undergo a TRAM flap, a procedure through which doctors would take muscle and fat from the body to reconstruct breasts at a later date.

But that plan went out the window in February 2015, when she experienced complications.

“I woke up and was getting Noah ready for day care and I could barely move to get up,” she said. “I knew something was wrong so when I dropped him off, I left his car seat and told them I wouldn’t be there to pick him up but someone else would.

“I didn’t know if I would be dead, but I knew I wasn’t going to be able to pick him up.”

Ewing drove to the Carl Larson Regional Cancer Center, where she was scheduled for radiation, but was sent straight to Raleigh General, where she was diagnosed with blood clots in her lungs and was then hospitalized for a week.

She recovered from the blood clots, but her reconstructive surgery was canceled.

“After that, the (plastic) surgeon wouldn’t touch me because I was on blood thinners and the surgery would take too long,” she said. “I was too big of a risk.”

Though she was disappointed, it was something she accepted as she finished radiation and eventually moved to Saltville, Va., to be near her parents.

But when the opportunity presented itself to try again in 2018, she took it.

Her implants only lasted a few months, however, as she quickly developed complications.

“When I saw the surgeon, he told me they would be OK, even though I didn’t feel good and had a low-grade fever,” she said, explaining he just gave her antibiotics.

Her oncologist, however, took one look at her red skin and called the surgeon himself, insisting if nothing was done, she would die.

“So, the surgeon took me in his office and popped the implants out right there,” she said, adding she was left with large holes in each breast.

Soon, she was back in the ER and then hospitalized with sepsis spreading through her body.

“That was rough,” she said.

Recovered from the infection, and left with more than $70,000 in medical bills, Ewing said she struggles with her body image but will not try surgery again.

“The boobs didn’t try to kill me once, they tried to kill me twice, so I’m done,” she said. “It’s something I think about sometimes, but I could have left Noah twice.”

She does say it’s not easy for her, though, as a single mother, just 41 years old, to live in such a changed body.

“Dating doesn’t get anywhere,” she said, explaining she’s had some difficult experiences with men and with her own self-esteem.

She says she’s working on that and she’s happy to simply be with her son and to be a good example for him.

“I don’t want him to grow up and be a man who expects a woman to be perfect,” she said. “I want him to know she’s still there even like this.”

Ewing is doing well these days, save for neuropathy in her hands and feet caused by chemo. She looks forward to celebrating six years cancer-free on Oct. 30.

She visits her oncologist every three to six months and has yearly scans to check for recurrences.

“When you’re a survivor, you just survive but you never know if it’s going to come back,” she said. “It may come back, or it may never come back.”

She’s grateful her cancer was caught in time but wonders about the four years in between that first pain and the diagnosis.

That’s something she tries to talk to others about. She encourages them to be their own advocates.

“If you feel something, don’t hesitate.”