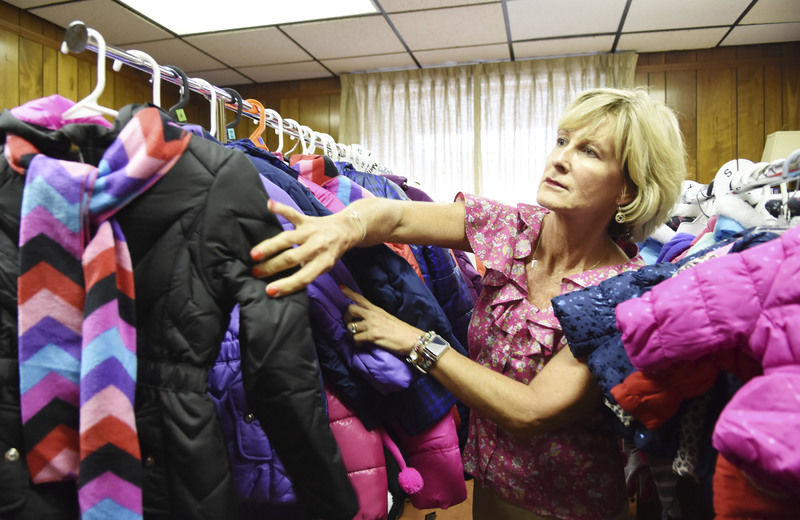 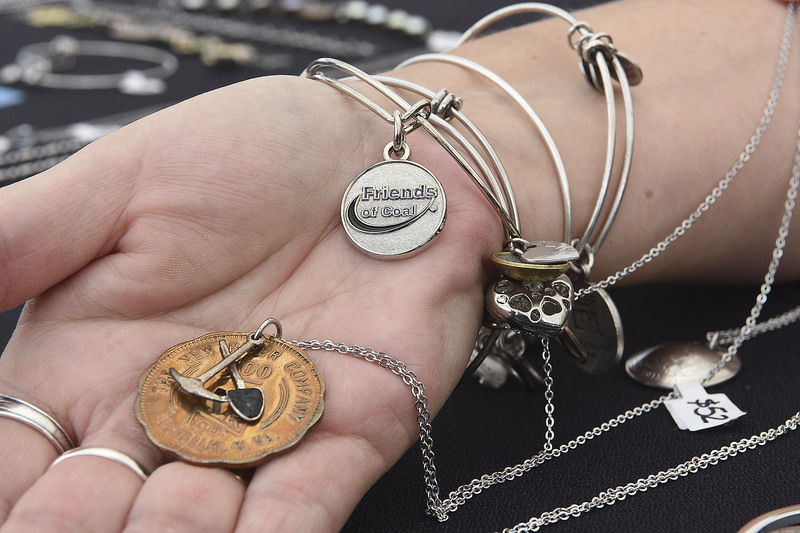 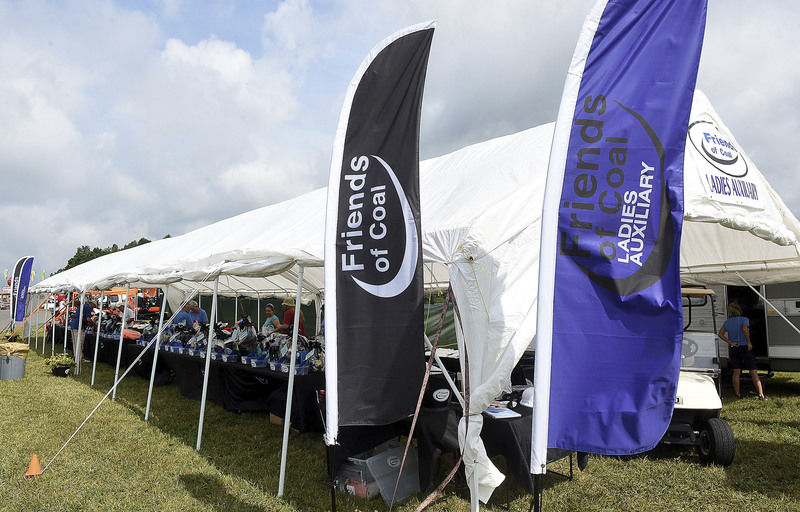 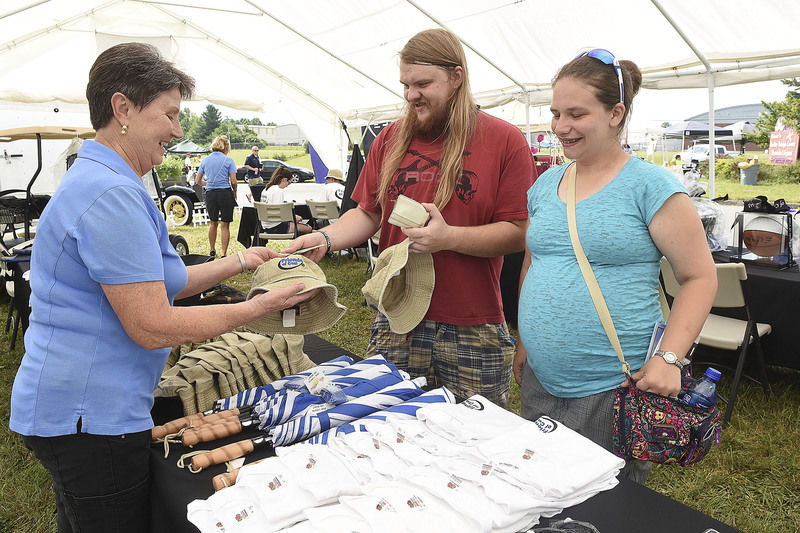 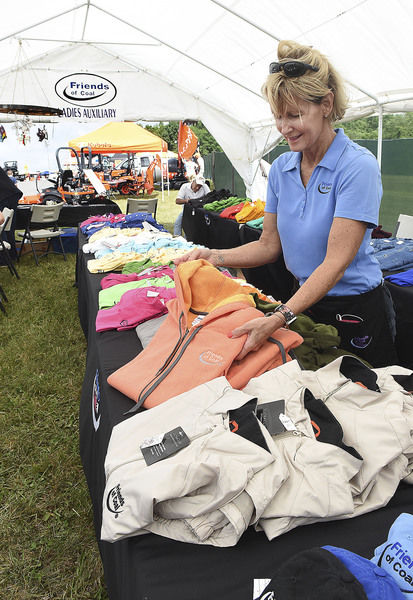 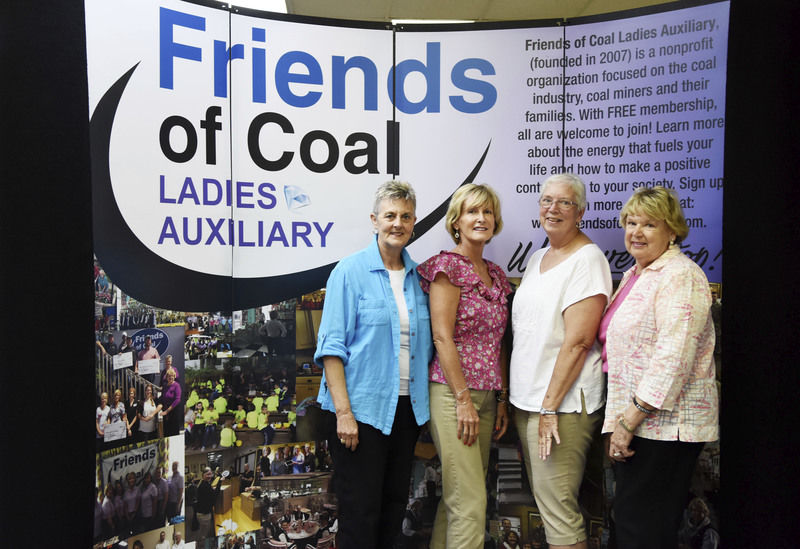 The Friends of Coal Ladies Auxiliary boasts a board of 13 women. Pictured are Nancy Gentry and Regina Fairchild, co-chair and chairman, and Judy Bayes, director of public relations, and Judith Long, secretary. (Chris Jackson/The Register-Herald)

The Friends of Coal Ladies Auxiliary boasts a board of 13 women. Pictured are Nancy Gentry and Regina Fairchild, co-chair and chairman, and Judy Bayes, director of public relations, and Judith Long, secretary. (Chris Jackson/The Register-Herald)

Fresh off a busy weekend, a dedicated group of ladies gather to sort and unpack items at the Friends of Coal headquarters in Mabscott.

“We set up a booth where we sold our wares,” Judy Bays, director of public relations for the Friends of Coal Ladies Auxiliary explains.

An assortment of items such as shirts, license plates, stickers, umbrellas, blankets and ponchos — all branded with the FOC logo — are available for purchase at a variety of events and festivals.

The biggest sellers at their most recent show, the annual Friends of Coal Auto Fair, Bays says, were cooling towels.

“We figured it was going to be really hot,” FOCLA Chairwoman Regina Fairchild adds, explaining the group plans ahead based on previous experience.

And they've gained a lot of experience through the years, as the group celebrated its 10th anniversary on July 11.

In the first 10 years, auxiliary members have dedicated nearly 120,000 volunteer hours, working events like the auto fair, packing items for their Giving Hearts program and teaching children in their Coal in the Classroom program.

“It's been a wonderful ride,” says Fairchild, who has held her position as chair since its inception.

The organization began when Fairchild was approached by the late Mel Hancock, who at that time, was working for Friends of Coal.

“He asked about would I be interested in getting some ladies together about doing something for the area,” Fairchild recalls. “I told him I thought it would be a great idea.”

Soon after, Fairchild hosted a luncheon for 75 ladies in her home, and the Friends of Coal Ladies Auxiliary was born.

Their first task, she says, was determining exactly what it was they hoped to accomplish.

“Our initial thought when we sat down and tried to figure out what we were going to be about and what we were going to try to do different than other organizations, was there are a multitude of things we can do, but we don't want to put a significance on just helping someone in the mining industry,” she says.

“So we're a friend,” she continues. “We're just a friend. A friend helping a friend in need.”

And that's where their Giving Hearts program came from — a desire to help.

Working through schools, churches, and even managers of low-income housing units, the ladies provide Christmas to children who might otherwise receive nothing.

“We try to give them two weeks worth of food, a complete Christmas dinner, two to three toys, pajamas, coat, hat, warm gloves and two to three outfits, depending on the situation,” Fairchild says.

They even work with a group in Charleston that helps them provide to children whose parents are in the military and deployed for the holidays.

And the love has even gone oversees to military dogs, as they've collected toys and treats for deployed service animals.

The ladies have participated in cleanup and beautification projects, working on landscape and planting flowers in various locations.

But much of their work focuses on young people as, much like their Giving Hearts program, they fill two closets at a local school once a month, providing clothing and underwear to any child who needs it.

“They have children who come to school sometimes who literally need a change of clothes or two,” Fairchild says. “Or shoes. So if they need that, it's there for them.”

Group members serve as educators as well, spending time in the schools as part of the Coal in the Classroom program.

“We want to make sure the children understand what coal was and is,” Bays says. “Where it came from and what it's meant to us.”

The six-week program, was originally taught in private elementary schools in Raleigh and Fayette counties, but has branched into two public schools in Kanawha County. Students learn from the ladies, some of who are retired teachers, as well as from special guests from the mining industry, who teach them about surface and underground mining as well as coal processing.

At the end of the classroom course, students take a field trip to the Beckley Exhibition Mine, where they tour the model coal camp and go on a journey underground.

Fairchild points out the new depot, an $80,000 partnership with the FOC Ladies Auxiliary and the Citizens Conservation Corps provided an upgrade to the mine, as it covered the depot and allowed them to install monitors so visitors can learn not only about the history of mining, but of the present as well.

“We're still mining coal, so we need to bring them up to date,” she says.

And although catering to the coal industry has never been the mission of the FOC Ladies Auxiliary, Fairchild says there is no organization without coal.

But as not everyone is a "friend of coal," she says it can create a bit of a struggle when fundraising.

As the industry — once their biggest financial supporter — has struggled, the ladies haven't done less. They've done more.

“We've had to get creative,” Fairchild says.

Fundraisers like the newly created talent show help support them in their various community efforts like assisting in Rainelle and White Sulphur Springs after the June 2016 flood, and golf tournaments, as well as a $100,000 donation from Brickstreet Financial, help send children from coal mining families to school.

“And we've found a need not only for high school students getting ready to go to college, but so many people in our area have lost their jobs in the mining industry and they're going back to school, so we want to give them scholarships as well,” Fairchild says.

Bays says the ladies always keep an eye out for new projects, but adds new projects or people in need have a way of finding them as well.

The group is looking for new ways to support their efforts. Their online store at www.friendsofcoalladies.com is regularly updated with new items based on popularity and demand, and ships locally and as far away as China.

Both Fairchild and Bays say new members to help out with their various projects are always in demand.

No coal affiliation is required, although Fairchild says everyone is connected to the industry in some way.

“We live in an area that coal touches every business,” she says. “It trickles down.”

Bays says she is humbled when she sees the effects the group's efforts can have on someone in need.

“It's changed my life,” Fairchild adds.

And that's why the members keep such a frantic pace. Something Fairchild says won't change.