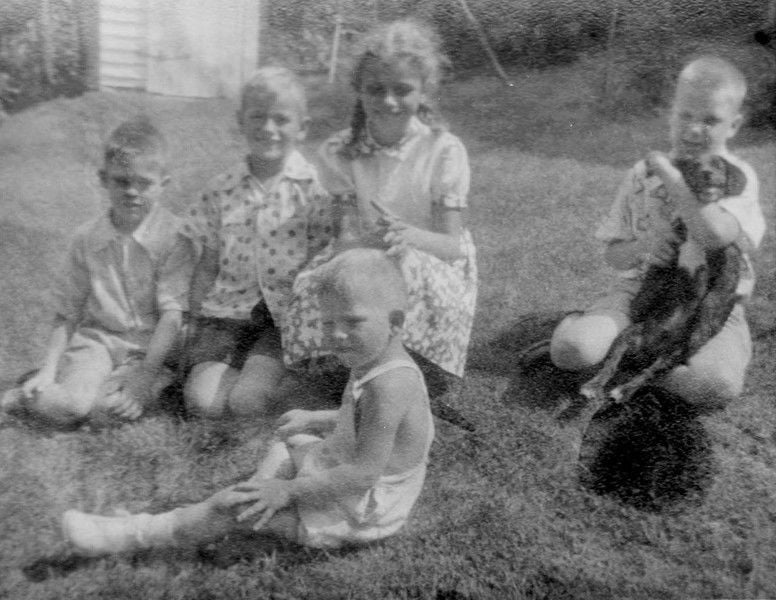 My dad, in front, with cousins Chris, Charles Jr., Judith and Carl. 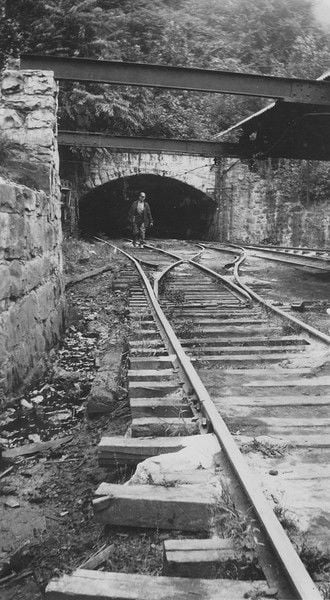 The entrance to the Minden mine. 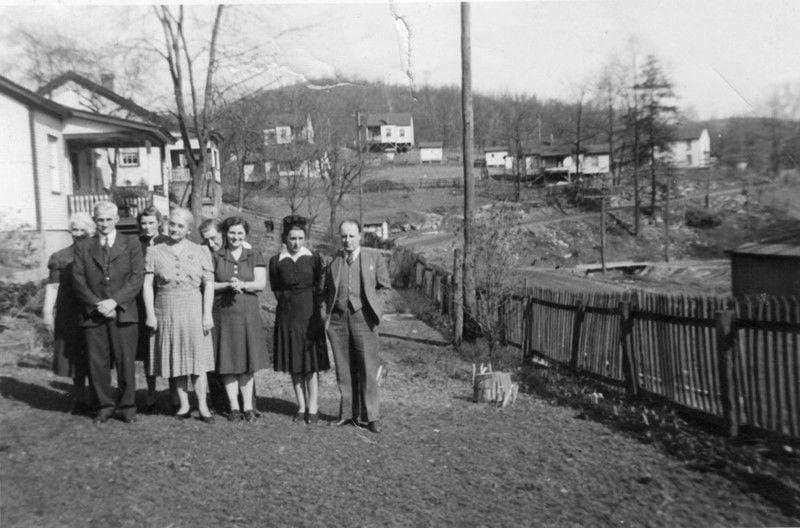 My grandmother, center, with family outside my great-grandparents Minden home in the 1930s or 1940s. 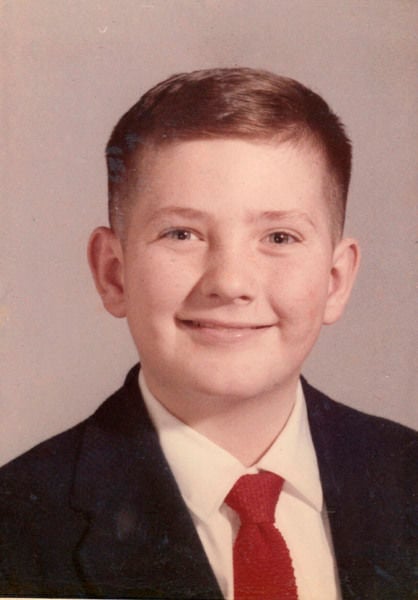 My dad, Kim James in what is probably a school photo. 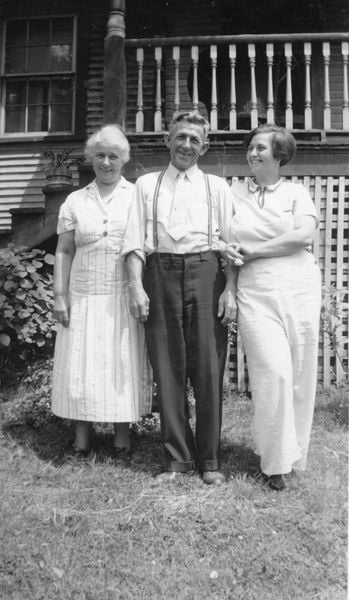 My grandmother, Elva James, “Mommy Oak Hill” to me, smiles adoringly at her parents Dick and Anna Watkeys in the 1930s. 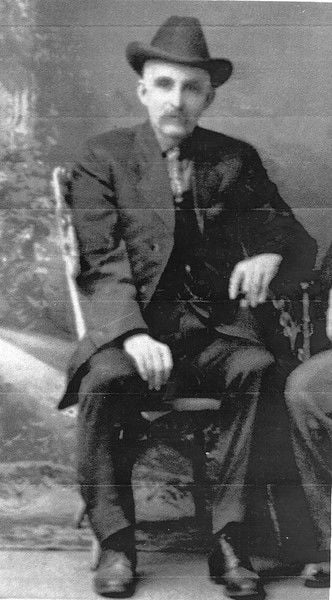 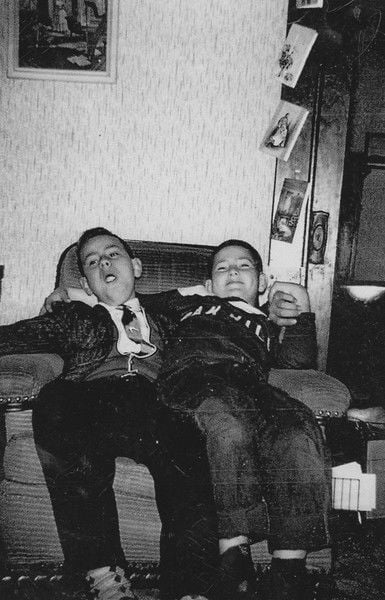 My dad and his cousin Charles Jr. at Christmas. 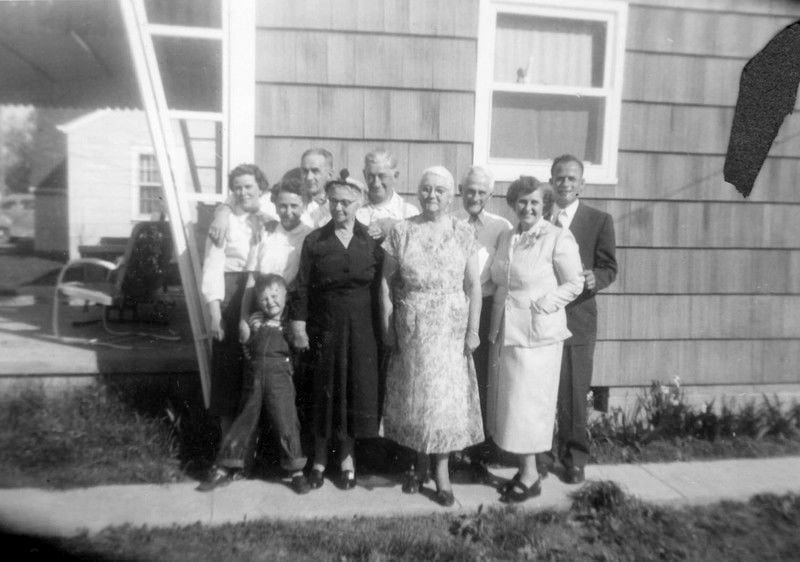 My grandparents Russell and Elva James are on the far right of this family photo. This photo was the first time I ever saw my grandparents together. My dad, Kim, is the little boy in the front. 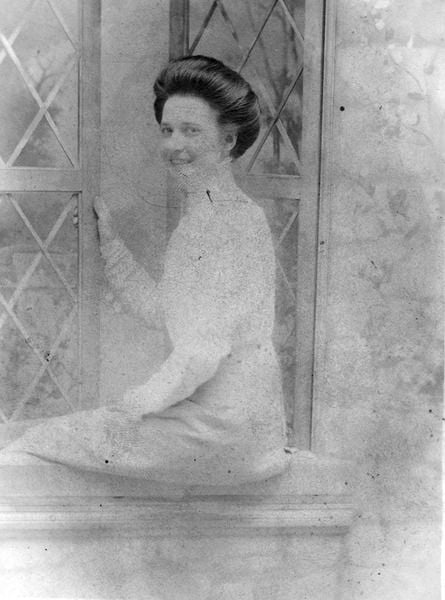 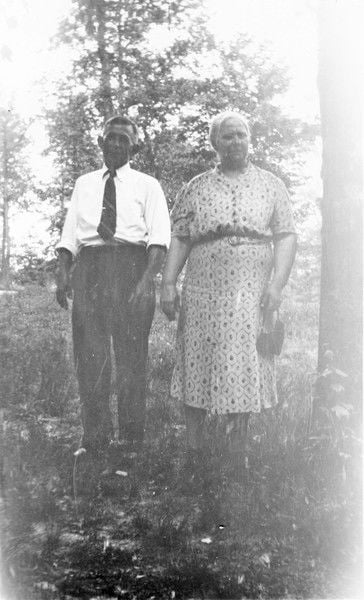 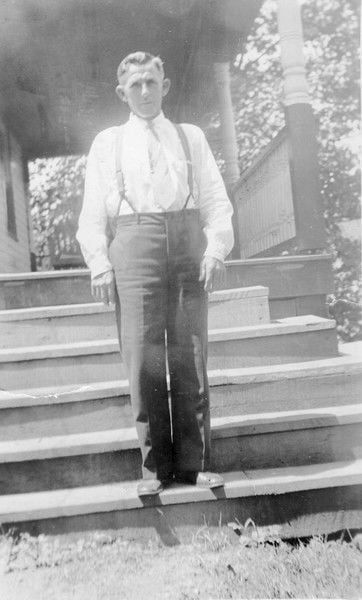 My great-grandfather Dick Watkeys at a family picnic at the Fayette County 4-H Camp in in 1939.

My dad, in front, with cousins Chris, Charles Jr., Judith and Carl.

The entrance to the Minden mine.

My grandmother, center, with family outside my great-grandparents Minden home in the 1930s or 1940s.

My dad, Kim James in what is probably a school photo.

My grandmother, Elva James, “Mommy Oak Hill” to me, smiles adoringly at her parents Dick and Anna Watkeys in the 1930s.

My dad and his cousin Charles Jr. at Christmas.

My grandparents Russell and Elva James are on the far right of this family photo. This photo was the first time I ever saw my grandparents together. My dad, Kim, is the little boy in the front.

My great-grandfather Dick Watkeys at a family picnic at the Fayette County 4-H Camp in in 1939.

“You know who that is, don’t you?” my cousin Carolyn asked as I glanced down at a photo on her kitchen table two weeks ago.

I picked it up and looked closer.

It was a photo of a teenage boy of about 14 dressed casually in shorts and a white shirt. He was gently holding the hand of a young blonde girl in a dress, white socks and black dress shoes.

It was the first time I had seen Carolyn in 17 years. I had been inside her Barboursville home for all of five minutes, and I was already crying.

I knew who was in the picture, but I had never seen my dad at that age.

A flip to the next photo showed him standing beside Carolyn’s mother Lettie, who stood beside my grandmother, great-grandmother and great-uncle.

The table was littered in hundreds of black and white photos, none of which I had ever seen.

And each image — every face — told the story of me.

Carolyn’s dad and my grandmother were especially close.

That’s what happens when you’re double-first cousins, I suppose.

The marriage of sisters to brothers blended the German Haisch family to the Welsh Watkeys family and made it so that my Ancestry DNA results shout Welsh from the highest rooftops as my James relatives also came from Wales.

As Carolyn’s father Charles — my dad called him and his wife Aunt Lettie and Uncle Charles — raised his family in Huntington, my grandmother married and moved from Minden to Oak Hill where she raised my dad.

My mom came from a big family and an even larger extended family. I learned a lot of stories through the years and saw a lot of their photos. Of course I have questions for her every day, but I was able to learn a lot from her before she passed away two years ago at 63.

My dad’s family, however, is a different story.

So when he passed away unexpectedly at 50, 19 years ago, he took with him the answers to questions I still don’t know I have. My grandmother, a teacher whose mind was stolen by Alzheimer’s, followed two years later.

In the years after she got sick, visits to Huntington fell off and without either of them, I didn’t go at all.

Somehow, I believed I was alone.

I signed up for Ancestry and did my best to make sense of the names and documents I found. On occasion, a photo would pop up and I would save it, but that’s about it.

But in the past few years I reconnected with Carolyn, her sister Judith and her daughter Joy — the tiny blonde in the photo — through Facebook.

Finally, when we spoke on my birthday and she explained another cousin from Florida would be in, I took the day off for a long overdue visit.

“Little Elva,” Carolyn said, referring to me as my grandmother, as she hugged me in her doorway.

On the table of treasures I found actual photos of Little Elva.

There were photos of two sets of great-great-grandparents. Photos of my grandmother beaming happily at her parents, photos of smartly dressed family members gathered for formal occasions. Or maybe they were just dressed for a Saturday afternoon. People dressed up for no reason at all back then.

I saw a photo of my great-grandparents’ house in Minden in the 1940s.

And then I cried again.

My grandparents divorced when my dad was 12. I never saw them together. Not even in a photo.

But that day I saw two.

They were smiling. They were happy.

Of course, I knew they were happy at times, but there was the evidence.

The story of me.

I asked a lot of questions during the visit. I learned a lot of stories. I still don’t understand half of what I saw, but the main thing is I have someone to ask.

The photos are important, but the stories behind them are of equal value.

I’ve thought about that a lot since that day.

Carolyn let me have several photos and made me copies of many others.

I’ve stared at them, passed them around. Cried again.

One thought comes back repeatedly.

People really used to take care of their photos.

We still take care of ours today. We shield our phones the second they get near water!

We take a lot of photos today. It’s easy to just pull out a cell phone and snap photos of your vacation, family or pets.

The difference is, we take hundreds of photos, upload a few of our favorites to social media and expect the Cloud or Google Drive to keep them safe.

When we want to show someone something now, we hand them our phones so they can scroll.

I’m a Xennial — that weird gap between Gen X and Millennial — which means I’m the last generation to grow up without technology, but also the first to get it.

And I (usually) love technology. I love knowing things are backed up and I will share some of those photos on Facebook.

But holding them in my hand is so much better.

Those photos passed from Philadelphia and Delaware to West Virginia, and from Minden to Cabell County and back to me. They were held by my great-grandparents, grandparents, aunts, uncles and cousins.

They were cared for and treasured.

That table of photos — the table of black and white treasures — will be an empty table with a cell phone.

Gather ’round and scroll.

Don’t worry, you can always pass down a hard drive.

But that won’t really lend itself to hours of family time and storytelling.

And that’s really what it’s about, isn’t it?

Passing it down. Connecting the past with the present.

That’s the story of us.