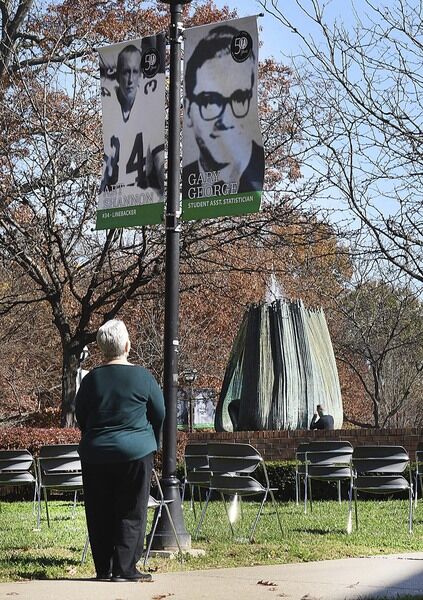 Toni Duncan, looks at a photo of her brother Gary George near the Marshall Memorial Fountain on the school's campus in Huntington. George was among the 75 people killed in the Marshall plane Nov. 14,1970.(Rick Barbero/The Register-Herald) 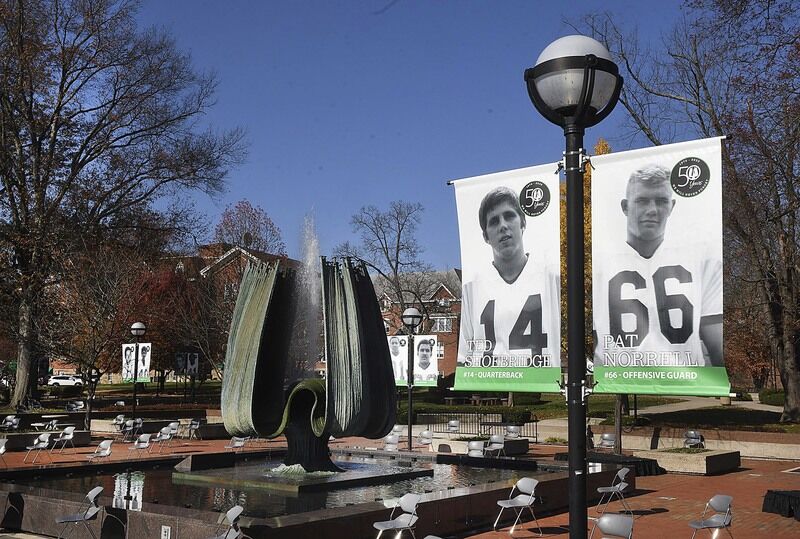 Banners bearing the faces and names of the 75 Marshall University football players, coaches, staff, boosters and flight crew members killed on Nov. 14, 1970, line the sidewalks that lead to the Marshall Memorial Fountain on the school's campus in Huntington.(Rick Barbero/The Register-Herald) 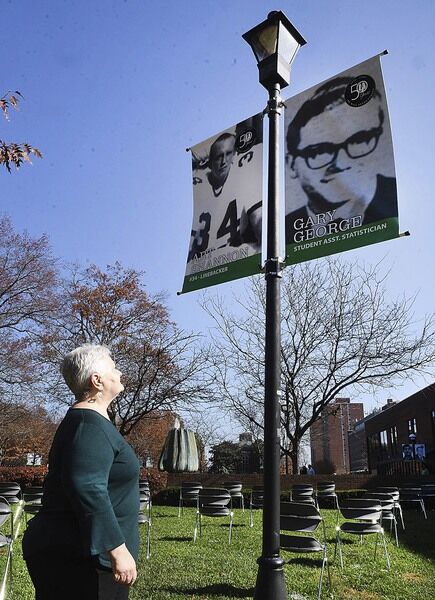 Toni Duncan looks at a photo of her brother Gary George near the Marshall Memorial Fountain on the Marshall University campus in Huntington. George was among the 75 people who died in the Marshall football plane crash Nov. 14, 1970.(Rick Barbero/The Register-Herald) 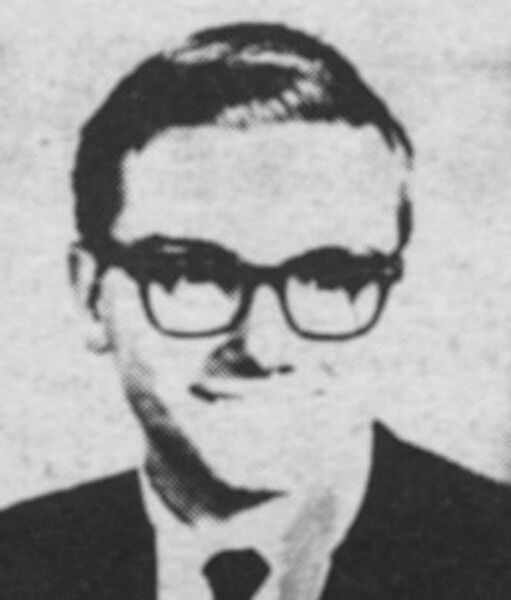 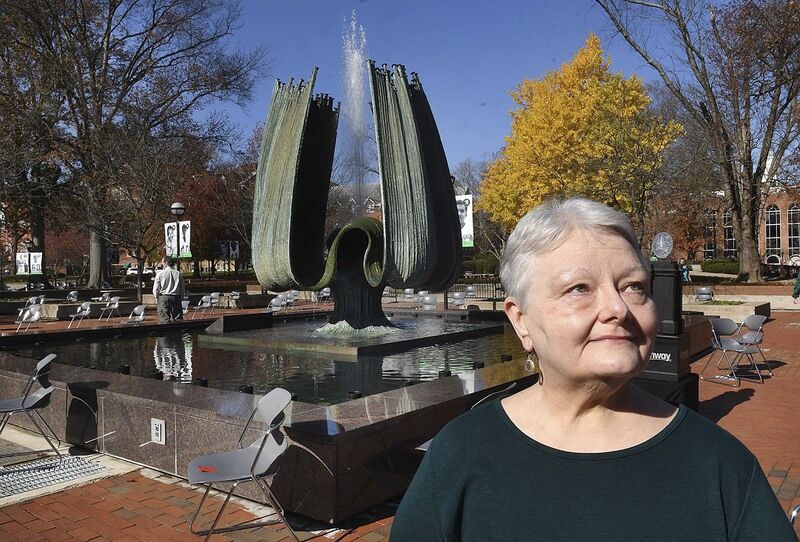 Toni Duncan, looks at a photo of her brother Gary George near the Marshall Memorial Fountain on the school's campus in Huntington. George was among the 75 people killed in the Marshall plane Nov. 14,1970.(Rick Barbero/The Register-Herald)

Banners bearing the faces and names of the 75 Marshall University football players, coaches, staff, boosters and flight crew members killed on Nov. 14, 1970, line the sidewalks that lead to the Marshall Memorial Fountain on the school's campus in Huntington.(Rick Barbero/The Register-Herald)

Toni Duncan looks at a photo of her brother Gary George near the Marshall Memorial Fountain on the Marshall University campus in Huntington. George was among the 75 people who died in the Marshall football plane crash Nov. 14, 1970.(Rick Barbero/The Register-Herald)

It wasn’t the ceremony she might have imagined when he left Beckley for Huntington 52 years ago.

When Gary George’s name was called, it was Duncan who walked across the stage and received the diploma and congratulatory words from Marshall University President Dr. Jerome Gilbert.

Duncan has thought a lot about all the things her brother has missed since he perished among the 75 Marshall football players, coaches, staff, boosters and flight crew members on Nov. 14, 1970, when Southern Airways Flight 932 crashed near Huntington’s Tri-State Airport.

But Gary’s missed graduation, Duncan said, was never among those thoughts until she learned Marshall would award posthumous degrees to the 39 students whose lives were cut short on that rainy hillside.

“I just broke down and started crying,” she said of her reaction to the news. “It was just never something that I had the thought of that he hadn’t gotten his diploma.

“And to do that on the 50th anniversary is just so fitting. It’s a beautiful thing.”

Duncan was just 14 years old when her 20-year-old brother, an assistant statistician in Marshall’s sports information department, was killed.

Because of the age difference, she said, they never attended the same school together or had many common interests, but she remembers the 1968 Woodrow Wilson High School graduate as ambitious and “always on the go.”

“He was very outgoing and friendly,” she said. “I don’t believe he ever made an enemy in his whole life.”

While still in high school, Gary served as manager for the Flying Eagles basketball and baseball teams. It was during this time that Duncan said her brother developed a love for radio as he worked for WJLS and met Gene Morehouse, the voice of the Thundering Herd and the school’s sports information director, who also died in the plane crash.

“I remember he and his friend wanted to own their own radio station,” she recalled.

And Duncan said she believed Gary, a junior journalism major, was well on his way to achieving all of his dreams in the fall of 1970.

He and his college sweetheart, Kay, had married in June and had just moved into what Duncan describes as a “cute little” apartment on Huntington’s west side.

And through the relationship, Duncan found a new sibling.

“He would bring her for the weekend before they got married and she and I would stay awake in my room for hours talking, giggling and looking at magazines,” she recalled. “I was tickled to death I had a sister.”

She said her parents both welcomed Kay into the family. In fact, her mother Margaret spent the week leading up to Nov. 14 in Huntington, helping care for Kay, who had the flu.

Duncan said her mom planned to come home at the end of the week, but stayed through the weekend to help Kay when Gary was offered the opportunity to travel with the team to Greenville, N.C.

“The person who was supposed to go had to take an exam that Saturday, so Gary took his place,” she said, adding her brother had taken flying lessons in high school and had even flown solo.

“So, he took his place, almost at the last minute, and he was very excited about it.”

It was planned that Duncan would spend most of the weekend with her aunt in Crab Orchard as her father, Tony, worked overnight at the post office.

She remembers a fun day of “girly time” Saturday before she settled in front of the TV while her aunt visited with a friend in the kitchen.

She thinks she might have been watching “My Three Sons” when it happened.

When she finally understood what she was reading, she ran into the kitchen.

“Then I realized Daddy was probably asleep, so I had to call and tell him,” she said of her dad, who had learned of the crash on the radio when he checked on the score of the game. “After that, the rest is kind of a blur.”

Duncan said she remembers a quiet late-night drive to Huntington, where they stayed with an aunt because her brother’s apartment had just one bedroom.

“It was just shock and disbelief,” she said of how both she and her parents felt in those first few days.

“I think, in my mind as a 14-year-old who had never experienced anything like this, until my brother’s body was identified, I was kind of like, ‘He’s just going to call,’ ” she continued. “ ‘He’s going to call and say he missed the plane, or he’s just dazed and is stumbling around on the side of the road or he made it to somebody’s house.’

“Probably there were a lot of people like that until you just had to face the fact that that wasn’t going to happen.”

Although it wasn’t the original plan, Duncan followed in Gary’s footsteps to Marshall, where she met her husband and graduated in 1978.

She said getting away from home was something she looked forward to following her brother’s passing.

“Gary’s death changed them (her parents),” she said. “It made them more watchful of me. I was so looking forward to just being there and being away from home. I loved all four years of it.”

But though they were changed by the death of their only son, Duncan said Gary’s death was never something about which they talked.

“The daughter of some really close friends of my parents told me several years ago that her mother had told her that she would try to ask my mom about it and my mom would say, ‘I just can’t talk about it,’ ” Duncan said.

Neither of them, Duncan said, ever attended an event memorializing the plane crash.

“Even years later it was just too painful for them,” she said.

And for decades Duncan followed suit, never attending ceremonies and not often speaking of her brother.

It took Hollywood and the 2006 movie “We Are Marshall” to change that as she and her husband attended special screenings and an invitation-only gala in Huntington to celebrate the premiere.

That’s when Duncan, by then living in Portsmouth, Va., began streaming the annual Nov. 14 memorial service at the Marshall Memorial Fountain.

“I told someone afterward it felt like finding family that I didn’t even know I had,” she said of the event that attracts family members of those now known as “The 75,” area residents, Marshall alumni, students and faculty, and current and past members of the Marshall football team. “The ceremony itself was wonderful. The speakers and the love for everyone that everyone still felt after all those years, it was just wonderful.”

She said it was the first time she felt like it was truly OK to talk about the loss.

“After all those years of being used to not talking about it and then to talk so freely about it because everyone else had had the same experience, it was a weight off my shoulders,” she said. “I guess I had thought we had never talked about it, so I guess I’m not supposed to. But being there with all those other people and hearing their stories was so freeing.

“It really was like meeting family I never knew I had.”

Gary Wilson George’s name is now listed among those who graduated May 14, 1972.

Toni Duncan isn’t sure just what her brother would have done with his advertising degree if he had had a chance to put it to use.

She is, however, sure he would have made the most of his life, both personally and professionally.

Clara Jean Gray, 66, of Beckley, WV left this world November 23, 2020 to be with her Heavenly Father. Clara was born March 22, 1954 and was the daughter of the late Junior Clark and Ella Mae Green Toler of Bim, WV. Clara was of the Christian faith for many years. She is survived by a sister …