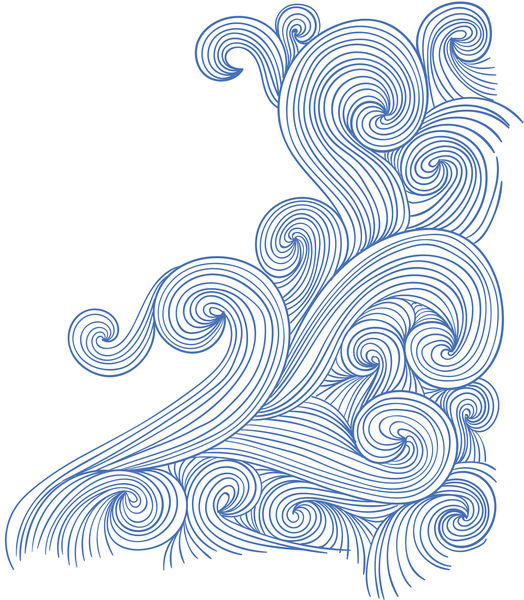 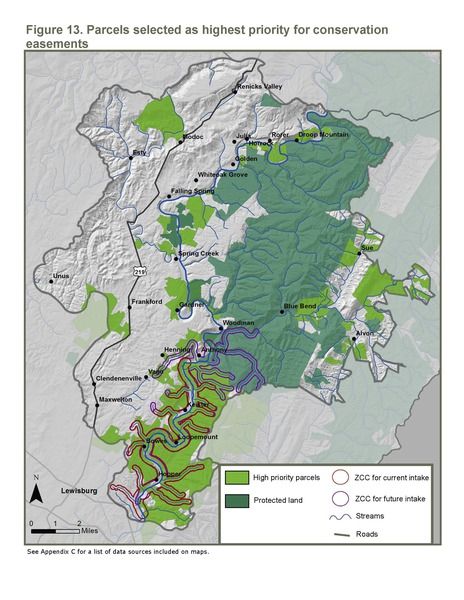 LEWISBURG — The fragility of drinking water sources was brought home to thousands of local consumers earlier this year when a tanker spilled diesel fuel into a tributary of Anthony Creek, which feeds into the Greenbrier River, threatening public water systems in Lewisburg and Alderson.

Consumers weren’t the only ones paying attention. The incident provided a rallying point for a West Virginia Land Trust work plan for a project dubbed the Greenbrier Watershed Initiative that had launched only a month earlier, in December.

As Terrell Ellis, the Land Trust’s senior program manager, explained to a group of more than 20 people gathered for an informational meeting at Lewisburg City Hall Tuesday evening, the scope of the work plan expanded beyond the typical geographic boundaries, referred to as a Zone of Critical Concern (ZCC).

In the wake of another, larger water crisis — the chemical contamination that fouled a public water system serving hundreds of thousands in the Kanawha Valley last year — the state imposed a mandate that all municipal water systems prepare a source water protection plan that encompasses the entire ZCC. As it applies to the 173-mile long Greenbrier River Watershed, that zone is defined as extending 1,000 feet inland from each riverbank and 500 feet inland from each tributary bank.

The source water protection plans must identify strategies to help prevent contamination of drinking water supplies, according to Lewisburg Mayor John Manchester. He said the Land Trust approached the city about considering land protection as a component of its strategies.

Ellis emphasized that the Land Trust’s Greenbrier Watershed Initiative is not a required part of the source water protection plans that must be filed with the state.

“This is not the plan,” she said. “It is an enhancement to the plan.”

The purpose of Tuesday’s meeting was to provide information to landowners interested in protecting their property via conservation easements in service of the larger effort to safeguard the drinking water drawn from the Greenbrier River. A partnership among the West Virginia Land Trust, the city of Lewisburg and the Greenbrier River Watershed Association sent letters to nearly 100 landowners along the river inviting them to attend one or more of the three informational meetings being held in Greenbrier County.

In addition to the Lewisburg meeting, others are scheduled at the White Sulphur Springs Public Library at 7 p.m. Monday and at the Frankford Volunteer Fire Department at 7 p.m. next Thursday. All of the meetings are open to the public.

The primary tool by which the Land Trust accomplishes this protection is the conservation easement.

Ashton Berdine, the organization’s lands program manager, described the easement as a legally-enforceable land preservation agreement between a landowner and a qualified land protection organization — like the Land Trust — for the purposes of conservation. Depending upon the goals of the landowner in seeking it, a conservation easement may be used to restrict such activities as real estate development or commercial and industrial uses, Berdine noted.

“Our role is to keep property intact,” he said.

Berdine said the benefits to the landowner include the satisfaction that he or she has permanently protected the land. The landowner may also be able to receive tax benefits, such as a federal charitable deduction that could continue for up to five years.

He acknowledged, however, that an easement “does diminish the resale value of property” because the ability to subdivide and develop all or part of the land has been surrendered in perpetuity, meaning that even if the property is later inherited by or deeded to another person, the easement will continue.

In fact, after a conservation easement is executed, a Land Trust representative will follow up with a site visit each year thereafter to ensure adherence to the terms of the agreement.

Several factors are at play in the Land Trust’s decision whether to agree to partner in a conservation easement, Berdine said, with preference given to larger sites. Location, environmental features, use and other significant features, such as historical value, also figure into the decision.

In the Greenbrier Watershed Initiative, which is supported by the James F.B. Peyton Fund, the Land Trust analyzed properties located in the target area surrounding the river and its tributaries, considering the land’s “natural attributes” and potential threats, Ellis said. Threats included roads, logging and agriculture.

Using this analysis, the organization identified 114 “priority parcels,” encompassing 21,000 acres and advised the landowners of the easement option.

“These opportunities are entirely voluntary,” Lewisburg’s mayor was quoted in a Land Trust press release. “But as a water provider for nearly 12,000 people in Lewisburg, Frankford, Fairlea, Ronceverte and Renick, the city of Lewisburg welcomes the chance to introduce landowners to the easement process and ways that they can become more involved with protecting critical resources in our community.”

Manchester said at the City Hall meeting, “The goal is to find folks who have an interest in this. It represents a good step forward.”

Ellis concurred. “We want to start immediately,” she said. “We’re able, willing and ready. We’re here for the long haul.”

For additional information about the West Virginia Land Trust or the Greenbrier Watershed Initiative, visit wvlandtrust.org or call the Charleston office at 304-346-7788 or the Morgantown office at 304-413-0945.

[br]BELLBURN [ndash] Andy "Wolf" Fox, 69, of Bellburn passed away on Friday, May 29, 2020 at his home. Born on September 9, 1950, he was the son of the late Clyde Junior Fox and Callie Shuck Fox. In addition to his parents, he is preceded in death by his brothers, Robert Fox and Michael Fox.…

Barbara Jean Williams Belcher, 74, passed away peacefully on Sunday, May 31, 2020 at her residence surrounded by her family. Barbara was born in Hinton, WV, on June 3, 1945 to Thomas and Goldie Williams, both deceased, and preceded in death by her older brother, Jimmy. Barbara is the loving …