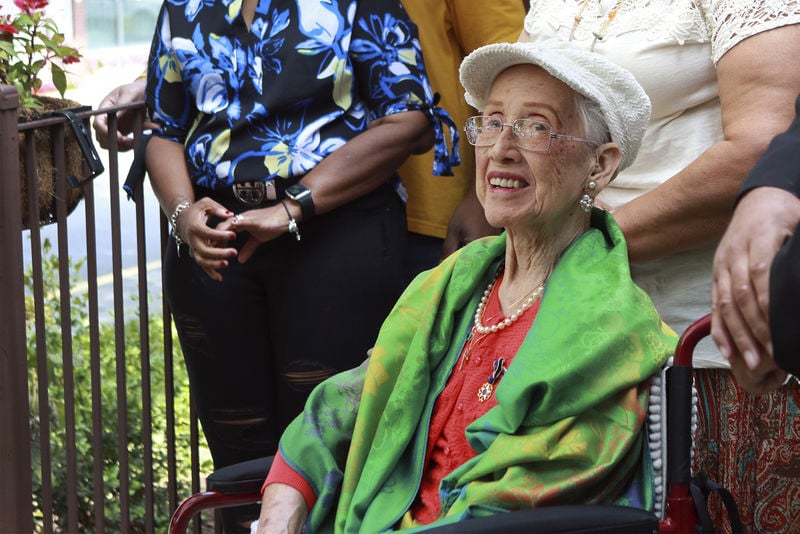 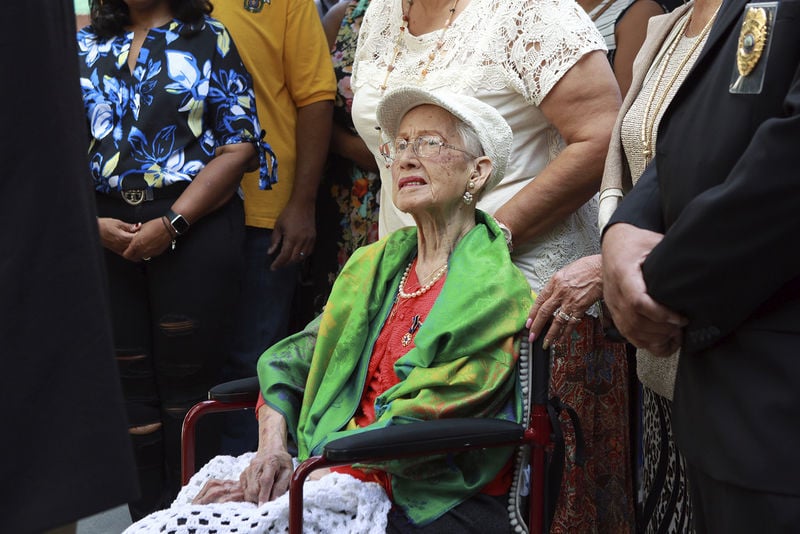 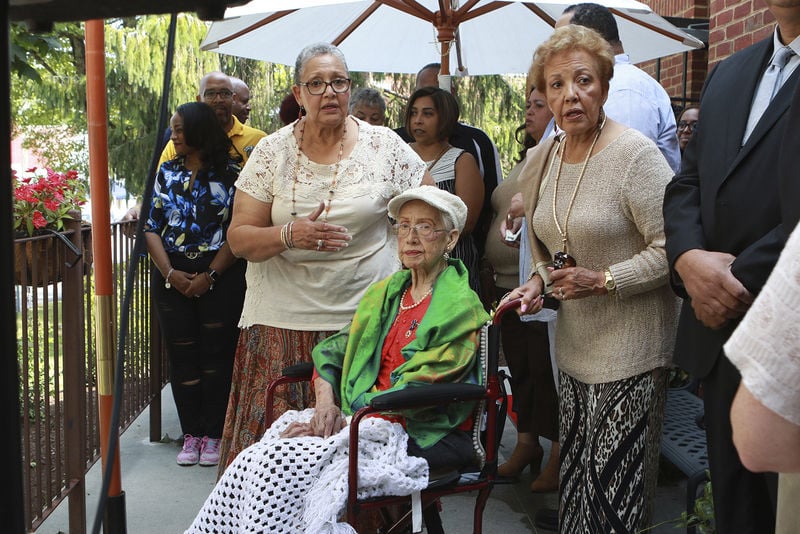 Katherine Johnson, 99, is surronded by friends and family at the White Sulphur Springs Library Saturday. Johnson attended a private ceremony to rename the library to the Katherine Coleman Johnson Building. (Jenny Harnish/The Register-Herald) 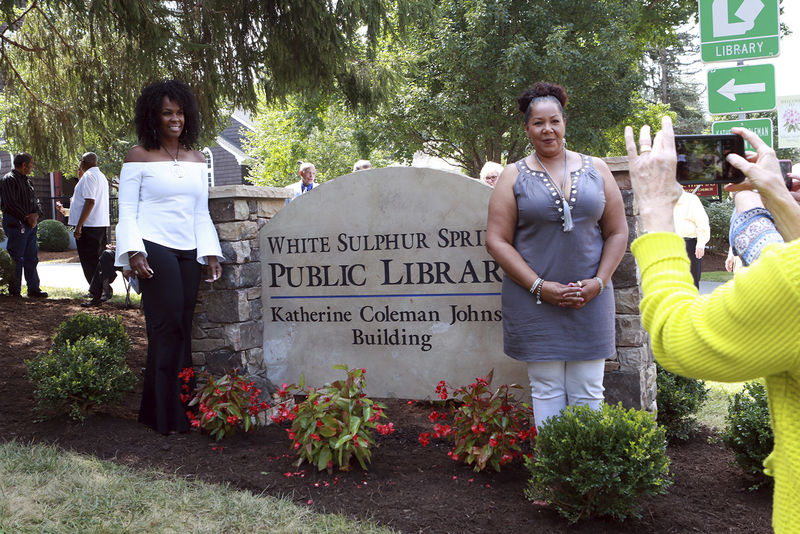 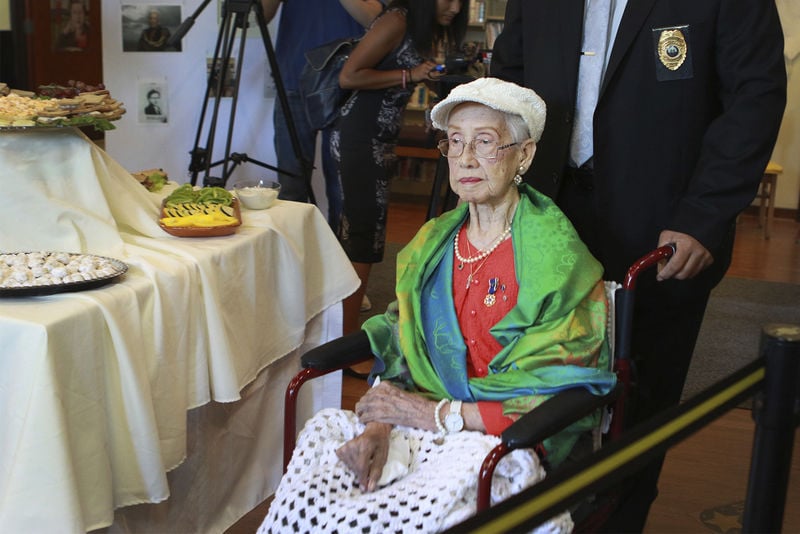 Katherine Johnson, 99, is surronded by friends and family at the White Sulphur Springs Library Saturday. Johnson attended a private ceremony to rename the library to the Katherine Coleman Johnson Building. (Jenny Harnish/The Register-Herald)

Not only was the brick structure housing the White Sulphur Springs Public Library christened the Katherine Coleman Johnson Building on Saturday, but the Community Room inside the library will henceforth bear the name of her late father, Joshua McKinley Coleman. Continuing the theme, access to the library is provided by Katherine Coleman Johnson Way, so named by the city this spring.

A recipient of the Presidential Medal of Freedom and numerous other accolades for her key role in the early success of the U.S. space program, the slender honoree appeared delighted when the crowd of more than 100 people attending Saturday's ceremony at the library sang "Happy Birthday" to her.

"It's a very special day," said Mayor Bruce Bowling. "Katherine Coleman Johnson is known to everyone in the nation. We are pleased that she and her family are here with us today."

"It's a pleasure to be here, and it's such as pleasure to have you here," Johnson responded to the applause as the library's new sign was unveiled by her granddaughters.

One of those granddaughters — Katherine Sanders of New Orleans (or "Katherine III") — said it's been 19 or 20 years since she had visited White Sulphur Springs, although it was once an annual stop. "It was our Thanksgiving home," Sanders said.

"We've been wanting to do this for almost 20 years," she added, referring to the family reunion atmosphere that included both of Johnson's daughters, two granddaughters, four grandsons and their partners, and one great-grandchild.

The day before Saturday's celebration, several family members accompanied Johnson on a trip down memory lane, looking around her former home on Church Street and, as daughter Joylette Hylick remarked, "(doing) everything you ought to do when you go to Bountiful."

Former White Sulphur Springs Mayor Lloyd Haynes, who was instrumental in making the initial contact with Johnson's daughters — Hylick and Katherine Moore — said he believes the journey back to White Sulphur "was a good thing" for her as well as for the town.

"It's a real blessing — not only for White Sulphur Springs, but for West Virginia and the whole country," Haynes said.

He marveled as he has before at how little her hometown and home state knew of Johnson's accomplishments, which only became common knowledge when her life story was told in the book "Hidden Figures" and later a movie of the same name.

"When I found out about her accomplishments, I contacted her family, and it morphed into what you see here today," he said Saturday morning.

One of the few people — outside of family — in attendance at the ceremony who knew much about Johnson's brilliance before it was revealed in "Hidden Figures" was local social justice activist Joan Browning, who had interviewed the then-retired mathematician in 2007. At the time, Johnson was preparing to speak in White Sulphur about her 33-year career with NASA, calculating space vehicle navigation and guidance.

In an op-ed piece published in Lewisburg's Mountain Messenger newspaper, Browning quoted Johnson as telling her, "I don't do any formal lecture. I speak to young people about their aspirations and their desires and address the matter of preparing yourself."

When asked by a TV reporter following Saturday's dedication ceremony what advice she would give to inspire others to achieve goals, Johnson got right to the point. "Just get up and do them," she said.

That can-do attitude is not surprising, given Johnson's achievements and the strong family from which she emerged.

Tom Ambrose, chairman of the library's Board of Trustees, noted that her parents put four children through college during the Depression, quite an accomplishment, especially for an African American family that was forced to deal with racial prejudice at nearly every turn.

"Katherine says her father was the most intelligent man she ever met," Ambrose told the crowd. "I think he was that kind of gentleman."

Ambrose based his opinion on what he learned about Joshua McKinley Coleman when working on an oral history of White Sulphur Springs several years ago. Interviewing Spa City resident Charles Burr, Ambrose asked him to name some "remarkable people" he'd met — not famous people, but just everyday folks who really made an impression.

Ambrose said Burr told him, "There was this gentleman. He was a custodian in the Community Building." And Burr proceeded to tell what a fine man Joshua McKinley Coleman was.

"That was just what I was looking for," Ambrose said. "All this time, I've been thinking of her father (looking at Johnson) as a remarkable person." He added, "He brought unbelievable dignity to everyone who met him and his family."

Later, while sitting amid a cluster of TV cameras in the library's spacious Community Room, Johnson glanced at her daughter Joylette, who told her this was the room that was being named for Johnson's father.

"This room?" Johnson asked, with a hint of wonder. When her daughter affirmed the fact, NASA's star mathematician beamed as she took another look around at the Joshua McKinley Coleman Community Room.