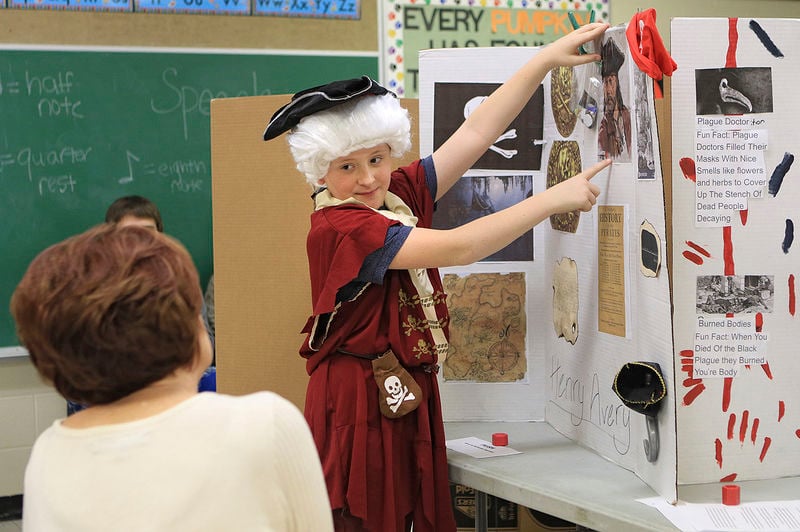 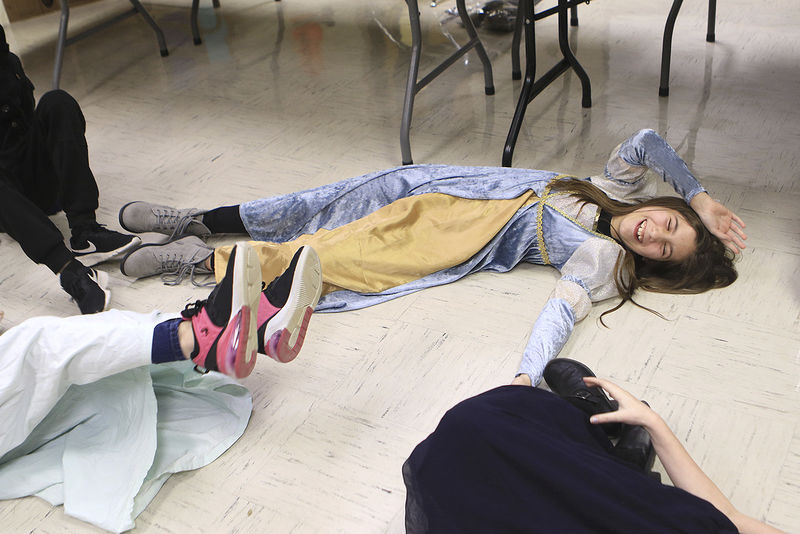 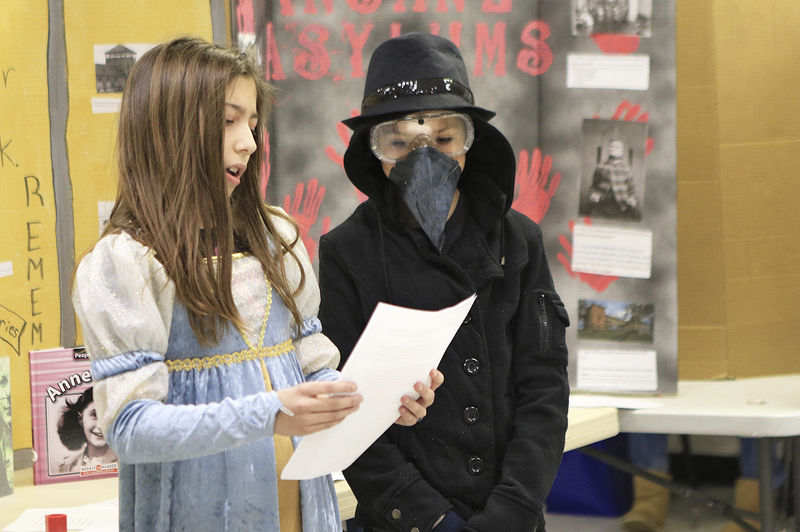 Crichton Elementary fourth graders Haley Bauer, 10, and Colton Saunders, 10, give a presentation about the Black Death at a Social Studies Fair at the school Wednesday. (Jenny Harnish/The Register-Herald)

Crichton Elementary fourth graders Haley Bauer, 10, and Colton Saunders, 10, give a presentation about the Black Death at a Social Studies Fair at the school Wednesday. (Jenny Harnish/The Register-Herald)

Greenbrier County’s Crichton Elementary School (CES), while small in size, is taking huge steps to educate students on issues and situations beyond what can be learned in a textbook.

Donna Nickell, who has been the principal at Crichton for two years, says the school, which houses pre-k through fifth grade, is “always doing a lot of great things.”

“We have an officer come in for D.A.R.E. with the fifth graders, we are getting ready for Battle of the Books, and we just had our 100 Day Celebration for the one-hundredth day of school. The posters that were on the walls and the things the kids came up with were amazing.”

She continued stating the school also participates in Snack-and-Pack where they send the kids home with a snack every Friday, after school interventions on Tuesdays and Thursdays and an after school enrichment program held at the Quinwood Library on Mondays.

Nickell, who started the after school programming, says that the school is simply trying to raise achievement within their students.

“Sixty two to 68 percent of our area is in poverty. Our students need every advantage that they can get. We have carting teachers that work from bell to bell and a very active PTA that try to give these kids every advantage possible.”

Crichton frequently has quests come to the school to further educate students on various topics. Recent visitors have been the Quinwood Volunteer Fire Department, who educated the entire school on fire safety while letting the children tour the fire truck and meet Squirt the fire dog; MedExpress, which came into the first and second-grade classes to teach the students how to get rid of germs; and the American Legion, who came into the fifth-grade class to educate students on the history of the flag, what it means and how to respect it.

Jane Jones, who is a mentor at the school, has been an anti-drug advocate in the Rainelle community for over 25 years and has seen three grandchildren walk Crichton’s halls, says the school’s success lies in the fact that they are trying to educate students on serious, real-life issues, such as drug-addiction and drop-out prevention, but also on things that make the students excited to learn.

“I am really just a concerned grandmother,” Jones stated, adding that she started helping in the school when her granddaughter, who is now 21, was younger.

Over the years, Jones watched as her second granddaughter,17, passed through Crichton and now watches her third granddaughter, 9, a fourth-grader at CES, make her own educational journey.

Jones says she did not get involved at Crichton to challenge the students, but to support the kids who need it the most.

“It’s just about seeing a need and getting involved. We are working closely with the teachers to push away the negatives of life and bring in the positives. One thing I really wanted to get into the school was a drug-prevention program. You can never get to a child too early.”

In her role as a mentor, Jones often mediates between students who are fighting or having problems and uses her position to turn that negative situation into an opportunity for creativity.

She says that “bringing kids together when they’re young when help them succeed and give them a future.”

Two students who Jones recently mentored helped her come up with the school’s drop-out prevention slogan, which will soon be printed on t-shirts and passed around the school.

“I got to asking the boys what they like to do, and they said sports. So, I said we should have a friendly competition to see who was stronger or taller or faster. Somehow we got fixed on the pull-up bar and that was when they came up with the slogan.”

Jones described the program's mantra as a stick figure holding onto a bar with the words “Just hang on. Don’t drop out,” surrounding him.

Aside from mentoring, Jones also reads to the second graders for the school’s Read-Out-Loud program and helps with the Random Acts of Kindness mission that she started last year, which encourages students to be kind to their peers, as well as their teachers.

“Not getting involved is the worst thing we can do,” she said.

“Kids are frustrated, but my main concern is that they don’t get discouraged," Jones said."Sometimes we get focused on the sports and extracurriculars, but it is very exciting to find out that the kids are excited to read and be creative. It gets the focus off of everything bad that is around them and focuses them on looking at the good things at an early age. It’s the quality of the students, not the quantity.”

For more information on Crichton Elementary visit the school’s website at ces.greenbriercountyschools.org.