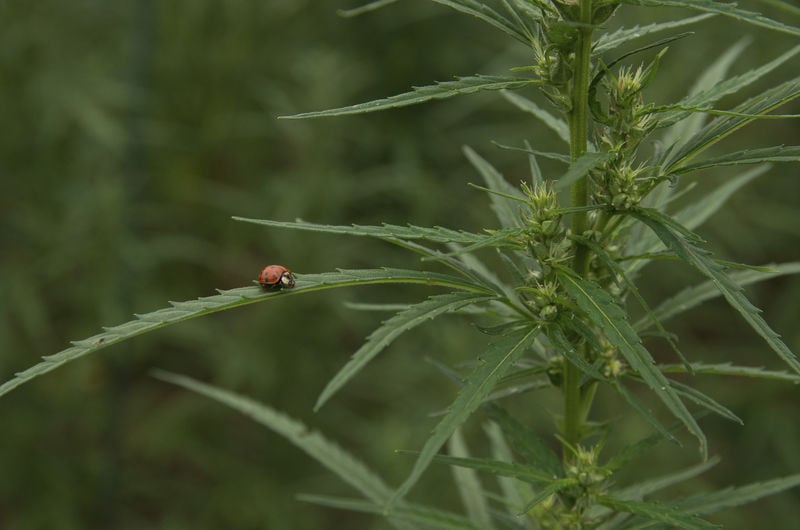 An Asian beetle, above right, takes a stroll along a hemp leaf. Hemp is naturally insect-resistant and needs no pesticides. 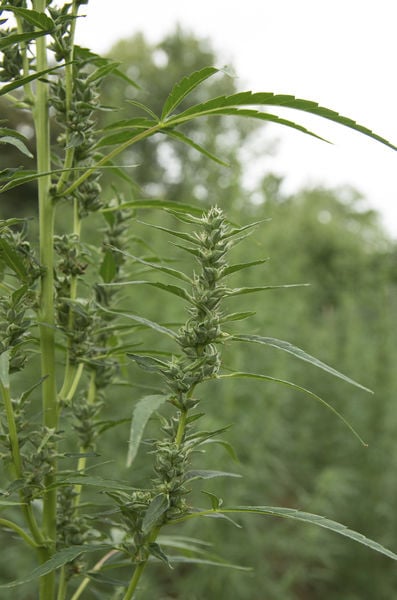 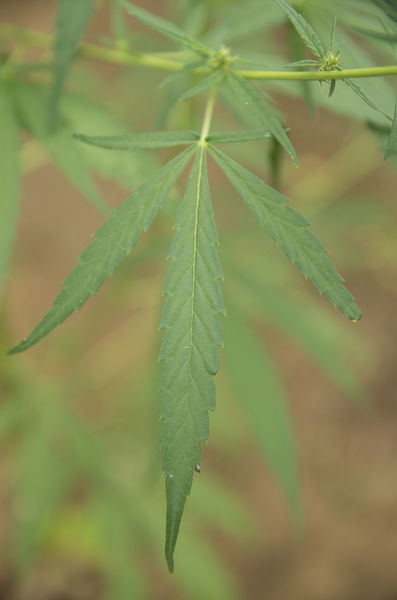 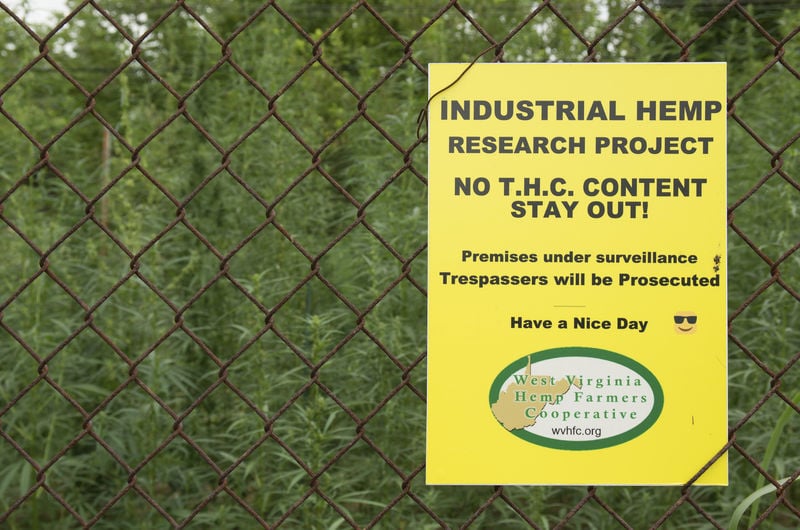 Growers of industrial hemp, right, often post signs saying that hemp has no THC content and is not a drug.

An Asian beetle, above right, takes a stroll along a hemp leaf. Hemp is naturally insect-resistant and needs no pesticides.

Growers of industrial hemp, right, often post signs saying that hemp has no THC content and is not a drug.

A handful of hemp farmers in West Virginia are seeding the future for the next generation, if and when industrial hemp becomes legal again. It’s the first time West Virginians have grown hemp since World War II.

Hemp was declared illegal in 1937 because of its kinship with marijuana, which was declared a Schedule I narcotic.

Although the plants are nearly identical, there is a difference, and the two cannot be grown together because cross-pollination will decrease the effectiveness of both plants. Hemp needs to be seedy and cellulose, with low Tetrahydrocannabinol (THC), the psycho-active ingredient in marijuana.

The permits come through the West Virginia Department of Agriculture, where Eric Ewing, state plant regulatory official, oversees the process.

“The main role we provide is we have the DEA (Drug Enforcement Agency) registration, which allows us to apply for seed imports,” Ewing said. The Department of Agriculture then distributes the seeds, which they test for THC to ensure they are below the 0.3 percent level that distinguishes hemp.

The Department of Agriculture inspects hemp farms twice a year. Most farmers are in the east-west swath from Wood County to Eastern Panhandle with the southernmost farm in Pocahontas County.

Hemp can be used for its fibers, oils and seed to make products like ropes and wearable materials, cosmetics and foods. Although it lacks a high concentration of THC, hemp is an anti-inflammatory and also has some medical uses. Different strains of industrial hemp are used for different products.

According to Kerr, hemp is now used in building materials in Europe and Asia. Hempcrete is nontoxic and cleans the air around it and through it, Kerr said.

“European farmers make a lot of money off of selling hemp construction materials,” he continued. The formula is simple, he said. One part hemp, one part water, one part lime. “You can build a house out of it.”

That’s why Andrew Must is experimenting with hemp in a secluded field near Hillsboro. He and business partner Clay Condon are growing six plots of hemp, three for building materials and two specifically for seed.

Must explained that hempcrete structures are usually built with forms around studs. He and Condon want to develop building blocks instead.

While the future of hemp as a product may be good, it’s still a controlled substance and Must and Condon are not allowed to keep the seeds they produce for next year’s crop. Still, Must said the two have learned much from their first experimental year in hemp production.

Next year, weather permitting, they’ll plant earlier with an expected harvest earlier than this year’s first week in October. They’ll also do some more study on removing the fibers or the decortication process and finding an efficient way to harvest their crop.

But with all of that ahead, and no profit from this year’s crop, Must still thinks there’s value in the experimental pilot project through the Department of Agriculture.

“Hemp has such great merit,” he said.

In Asian countries, hemp is competing with cotton for basic textiles. And hemp has a lot going for it.

No pesticides or fungicides are necessary to grow hemp, he said.

Hemp has some additional qualities that make it a good fit for growth in southern West Virginia, Kerr continued. It “cleans” the ground where it’s grown, which would be beneficial to reclaimed mountaintop removal sites.

But hemp can work with coal in another way, he said. Hemp can also be used as a bio-fuel that cleans the air when burned in conjunction with coal at a power plant, reducing the carbon output.

According to research published in “Hemp: An Energy Crop to Transform Kentucky and West Virginia,” by “blending coal with biomass materials such as hemp, sulfur emissions from power generation can be reduced and less valuable coal that is high in sulfur can remain competitive.”

The white paper by Katherine M. Andrews, Ph.D., and others says, “Co-firing has the advantages of lowered pollutant emissions, improved carbon footprint due to the consumption of CO2 by biomass crops, low capital costs as an add-on, and fuel flexibility to accommodate a range of usable biomass fuels depending on regional, seasonal, and weather factors.”

The authors suggest a 50 percent blend of dry hemp fiber and coal that will reduce the sulfur emissions of the plant to 1.56 pounds of sulfur per million BTUs, a reduction of 40 percent. That remains above the new federal levels, “but within reach of scrubbing technology available today.”

Hemp can also be used in alcohol products like beer, hard liquor and ethanol. But it has some more surprising products. It can be used to make activated carbon, which is in high demand globally in charcoal filters and in batteries.

For West Virginia farmers now, the process is to get approved through the Department of Agriculture and find a certified seed source. Seeds usually come from Canada or Italy, Kerr said, which makes them pretty expensive. Seeds for building material quality hemp can cost as much as $8 each, but generally cost somewhere between $5 and $10 a pound.

The downside could be from established industries like pharmaceutical, extractive and chemical industries that would see an erosion in their market base.

Kerr acknowledges that could be the case, but notes that industrial hemp’s versatility makes its own argument as a legal cash crop.

Ewing is optimistic about hemp’s future in the state, and looks forward to the results from this first experimental crop. He sees a viable crop for state farmers to add to their existing crops.

“It’s an incredible plant with so many uses,” Ewing said. “It’s good to see our state joining in on an opportunity to enhance opportunities for our farmers. It’s absolutely worth the effort. We have a good start.”

Harry Dee Williams, 69, entered Heaven's Gates August 11, 2020 at Bowers Hospice House. What a day that will be when my Jesus I will see, when he takes me by the hand and leads me through the promise land, what a glorious day that will be. Services will be 2 pm Friday, August 14, 2020 in the…