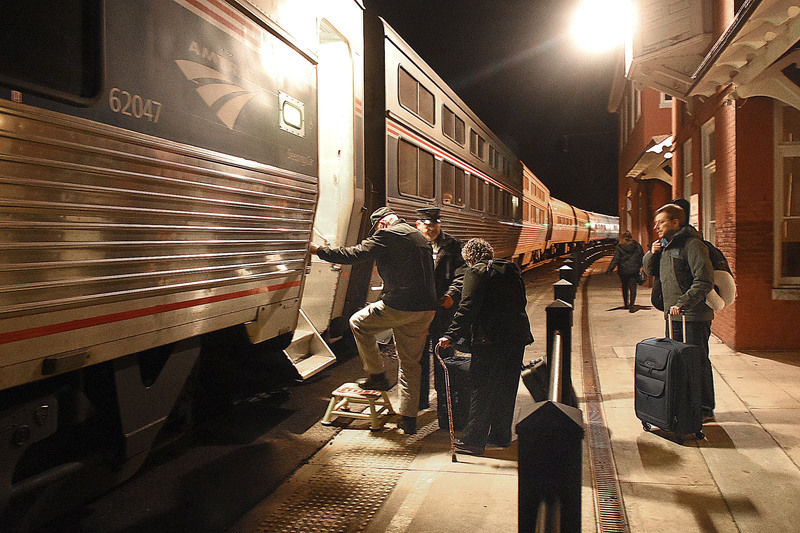 Passengers board the Amtrak train at the Hinton depot. (Rick Barbero/The Register-Herald) 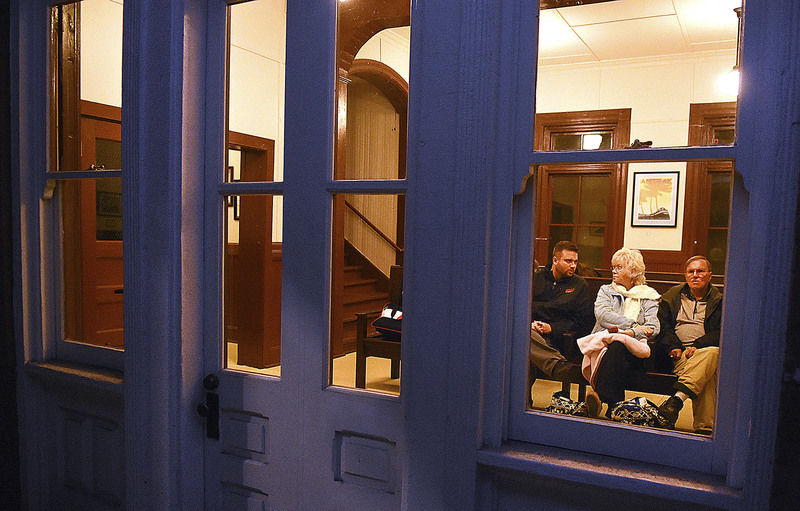 Passengers waiting on the Amtrak train at the Hinton depot. (Rick Barbero/The Register-Herald) 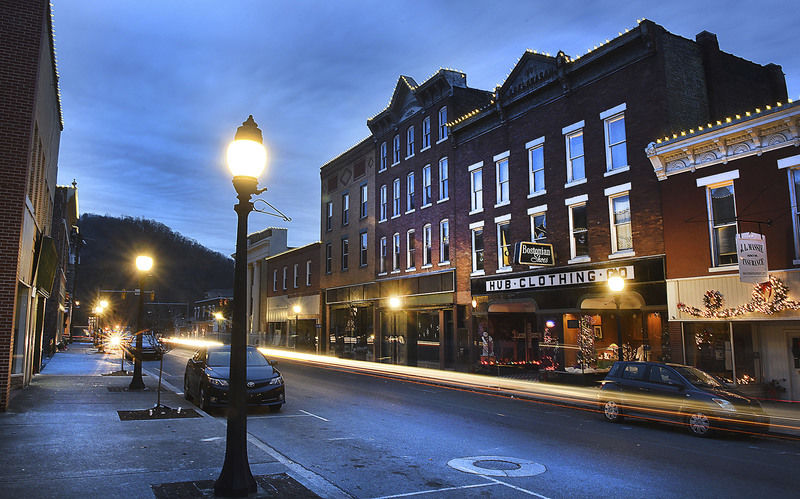 Passengers board the Amtrak train at the Hinton depot. (Rick Barbero/The Register-Herald)

Passengers waiting on the Amtrak train at the Hinton depot. (Rick Barbero/The Register-Herald)

HINTON – Tourists could be coming down the tracks for this town of about 2,500.

Once a bustling railroad town of about 5,000 situated along the New River just north of the confluence of the Greenbrier River, Hinton has seen its population dwindle by about half. Along with people, businesses and a tax base left after the railroads left when coal started a downward spiral.

The recent announcement that Amtrak is considering upping its thrice weekly Cardinal line to seven has town officials seeing hope for an industry which could be the region's future.

"We feel it would definitely help promote our tourism," Chris Meadows, Hinton's town manager, said of the possibility.

Hinton is in the middle of revamping itself by opening unique stores, a theater and restaurants, including the outdoor shop Otter and Oak and eateries The Market on Court House Square and Chessie's on the Square. Kevin Hall, culinary manager for both restaurants, supports the expansion, since it would increase tourism, which would bring a number of new people into the restaurants' doors. "I favor anything that brings more people to the town," he said.

Town leaders believe they can marry the new with the old. The Hinton area, they said, is filled with railroad history, from its popular depot to the newly restored turnabout, and has a number of popular weekend activities every year, including Hinton's Railroad Days and nearby Talcott's John Henry Days, a three-day festival in July.

Town officials believe tourism could be the new economy of the area. In recent decades, Hinton, like many towns dotting southern West Virginia, was subjected to the boom and bust of the coal industry. However, it was dependent on the railroad for its economic livelihood, as large portions of coal trains originated out of Hinton. When the bottom fell out, so did the $70,000 to $80,000 a year engineering jobs with the railroads, said Meadows. Those engineers "had to go somewhere else to make a living," he said.

A recent issue of Governing magazine warned coalfield communities that tourism could not replace coal jobs. Any form of tourism – ecotourism, cultural tourism, adventure tourism – brings in people who spend money without being much of a burden on infrastructure.

But the magazine asked whether coalfield towns are equipped to handle tourism. Meadows said Hinton lacks some of the necessities to attract visitors. Counties and towns across the region are facing similar issues. Counties such as Wyoming and McDowell lack hotels to host large groups of people. Small towns face similar issues.

While Hinton and Summers County have a few bed and breakfasts and are close to two state parks, a ski resort and other tourist venues, there is no taxi or Uber service.

Hinton leaders "have talked about the issue. I think it's a 'building it and they will come' type of thing," Meadows said, referring to the famous movie line in "Field of Dreams" about a man who builds a baseball field in the middle of an Iowa cornfield and tourists flocked to it.

The more Meadows thought about the possibility of seven-day-a-week service, the more opportunities he saw – inexpensive high school field trips to Washington, D.C., baseball games in Cincinnati, excursions to Chicago and New York.

Funding possibilities to expand Cardinal service are more flexible now since the passage of the FAST Act, said Kimberly Woods, a spokeswoman for Amtrak.

Interest has picked up since the passage of the FAST Act, a piece of surface transportation legislation, which for the first time includes new starts funding authorization "among a cornucopia of funding streams" which could potentially be used to improve the Cardinal, she said.

The Cardinal currently makes stops in southern West Virginia – White Sulphur Springs, Alderson, Hinton, Prince, Thurmond, Montgomery, Charleston and Huntington – on its round trip between Chicago and New York City – on Sunday, Wednesday and Friday. It's unclear the number of people who board and exit at Hinton, but Meadows said it is the second most popular pickup and dropoff point in southern West Virginia.

The seven-day expansion is part of a larger movement across several states to increase the Cardinal's service. Throughout the year, community leaders, elected officials, advocates, and private sector businesses along the Cardinal route expressed interest in opportunities to improve train service. This discussion has largely centered on making the Cardinal a daily train.

The efforts were spearheaded by the Cincinnati business community and the city's chamber of commerce as a way to increase commerce.

"Reliable and consistent passenger rail service is really critical to our region's ability to compete and maintain our reputation as one of the fastest-growing economies in the Midwest," Jason Kershner, the chamber's vice president for government relations, told MetroNews. "That point is relevant to the other stops along the route as well."

Meadows agreed: "Expanded [train] service could really be good for this region."

In September Amtrak and partners held a daylong Cardinal Conference in Cincinnati which provided a forum for communities between Chicago and Washington, D.C., on how to help improve the train's service. Presenters included representatives from state and local governments, Amtrak representatives and the business community.

The current tri-weekly Cardinal service returned in 1981 by West Virginia's late Sen. Robert Byrd, so it seems appropriate that West Virginia is taking a leading role in working with Amtrak and the host railroad [CSX] to improve the service, said Woods, the spokeswoman for Amtrak.