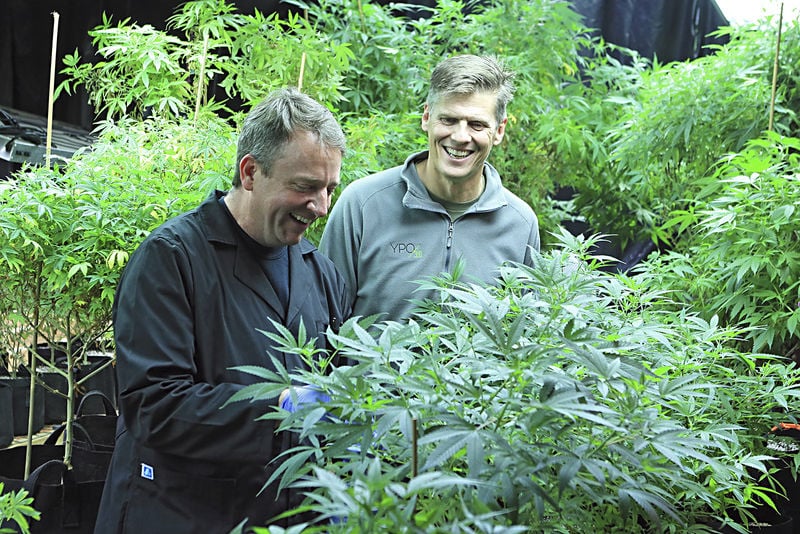 Josh Ludgate, left, and Duane Zobrist opened Appalachian Extracts, a CBD oil processing facility in White Sulphur Springs in January. They describe the business as "seed to shelf"- the hemp is grown, processed and turned into a sellable product at the facility. (Jenny Harnish/The Register-Herald) 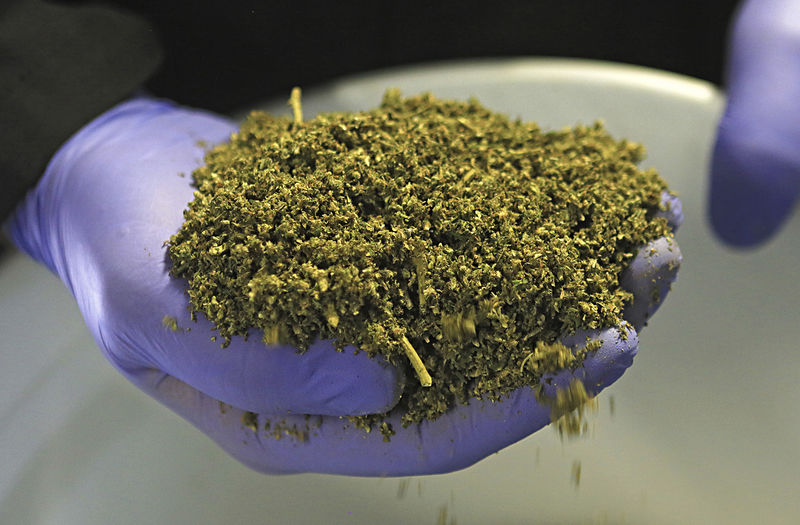 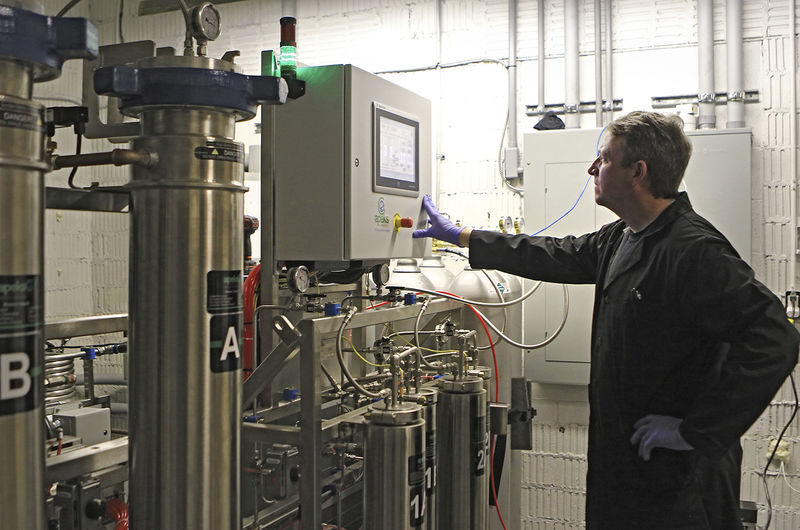 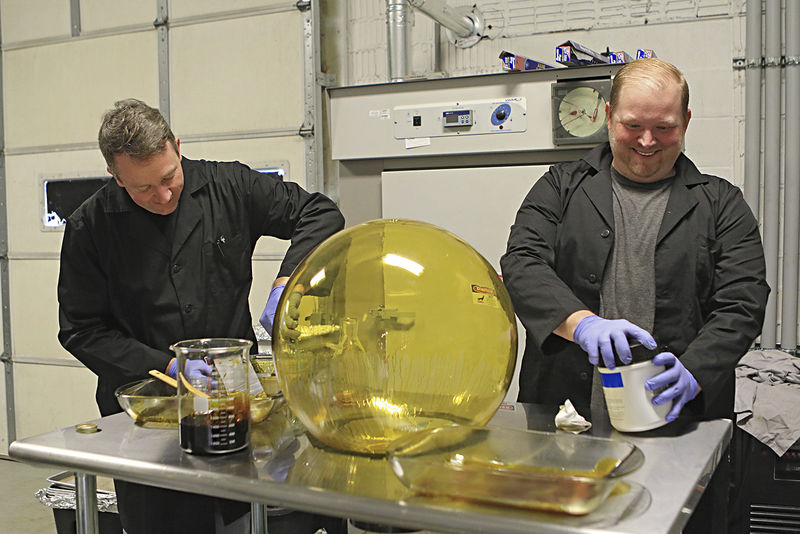 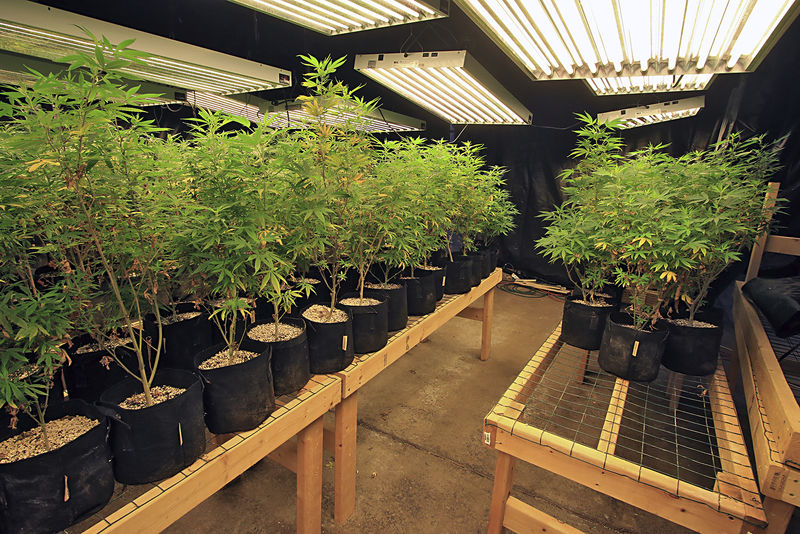 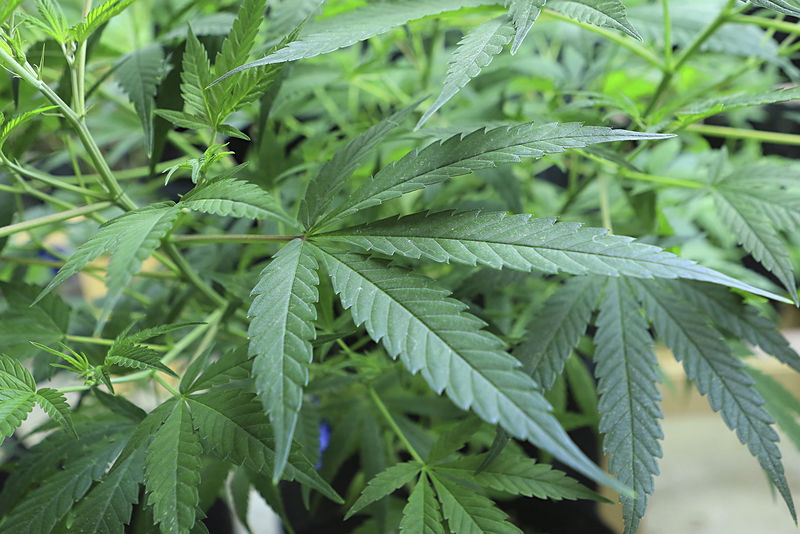 Josh Ludgate, left, and Duane Zobrist opened Appalachian Extracts, a CBD oil processing facility in White Sulphur Springs in January. They describe the business as "seed to shelf"- the hemp is grown, processed and turned into a sellable product at the facility. (Jenny Harnish/The Register-Herald)

With a farm bill signed into law by President Donald Trump in December, hemp “moved from a quasi-legal trial program to a full-fledged legal crop,” Appalachian Extracts owner Duane Zobrist told The Register-Herald in a recent interview.

In order to ensure Appalachian Extracts’ products remain below the allowable THC limit, the extraction process involves grinding up the entire plant to the consistency of coffee, Zobrist explained. The moist mixture is dried in an oven, and the CBD oil is extracted using pressurized carbon dioxide, yielding what Zobrist calls “crude oil.” After several additional steps involving heat, straining out the plant material, freezing at a very low temperature and filtering, the oil is poured into mason jars, distilled and finished in a vacuum oven before being bottled and packaged for sale.

“We can rival anyone in the world with what we’re doing here,” Ludgate said.

Both men were reluctant to make claims about the health benefits of the resultant CBD, citing the lack of FDA (U.S. Food and Drug Administration) approval for any medicinal use of the product.

Such online resources as healthline.com describe CBD as “a popular natural remedy” for a number of ailments, ranging from acne and anxiety to arthritis and high blood pressure. The websites advise checking with a physician before using, however, especially if already taking prescription medications.

“I have friends and family with hip and joint problems,” he said. “They have seen a difference with CBD. This is a remarkable plant. They’re amazed by it.”

He said, in addition to its potential applications to address human health complaints, hemp byproducts can be used to make products as diverse as concrete or animal bedding.

“It’s an iceberg,” he said. “Ten percent out of the water; 90 percent still below the surface. We just want to find ways to help people and animals.”

Products sold at Appalachian Extracts’ production facility and shop in White Sulphur Springs, as well as other locations as far away as California, include vape cartridges, tinctures, balms, pet tinctures and smokable flowers.

“There’s not a typical client,” Zobrist said, although he indicated younger folks suffering from anxiety, and older people seeking relief from the aches and pains that come with age, are the most likely customers in his Main Street shop.

But those looking for the “high” of CBD’s cousin, marijuana, are in for a disappointment.

“There’s no high at all with CBD,” Zobrist emphasized.

Ludgate reinforced Zobrist’s assertion, saying, “The only way you can get high on hemp is if you tie it together and make a rope out of it and use it to climb a tree.”

Farmers are among the primary beneficiaries of industrial hemp’s newfound popularity in the Greenbrier Valley.

“The state’s been great,” Zobrist said. “West Virginia is doing something better than Virginia for a change. Our Department of Agriculture is as friendly as it possibly could be — it’s a very government-friendly system.”

He noted that Appalachian Extracts buys its hemp from farmers within a 100- to 150-mile radius of the White Sulphur extraction facility. That gives local farmers access to processing and to the marketplace.

“We have unique ways to help farmers maximize their potential,” Zobrist said.

The company splits the extracted CBD 50-50 with the farmers, who have the option of either taking the finished oil or having Appalachian Extracts broker the oil and pay the farmers for it.

He said he expects the company to employ between 60 and 90 people at the lab by the time harvest rolls around this year. It will be a 24-hour operation from the second week of September through Halloween.

The owners also envision the day when, as one Agriculture official put it, West Virginia will be the “hemp epicenter” of the country.

Pointing out that the Greenbrier Valley has a lot of vacant buildings and unused warehouse space, Zobrist said, “We’d like to see them filled with dried hemp and processing machines. Turn an albatross into an income producer.”

He finds the hemp/CBD industry energizing.