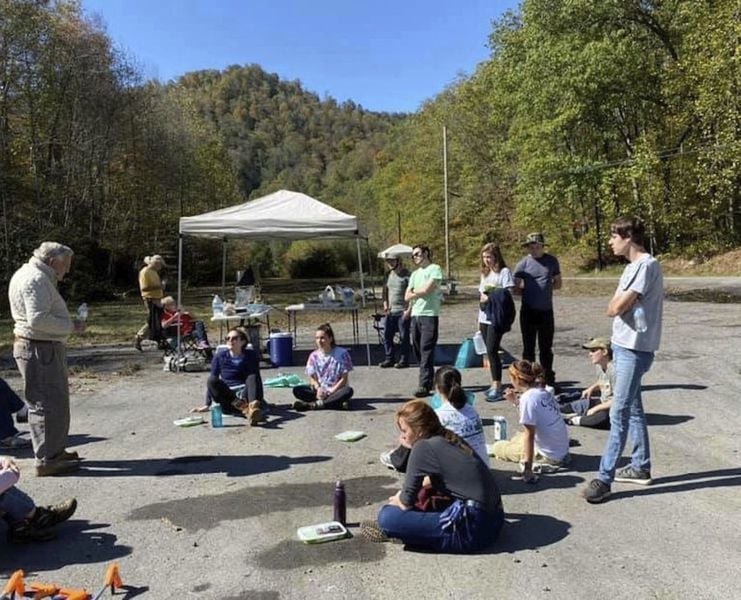 Mary Catherine Brooks/Wyoming County ReportDewey Houck, standing far left, RAIL president, talks with area volunteers and a work team from the College of William and Mary. Volunteers and the college students were clearing brush and trash from a new six-acre community park near the Wyoming County line. 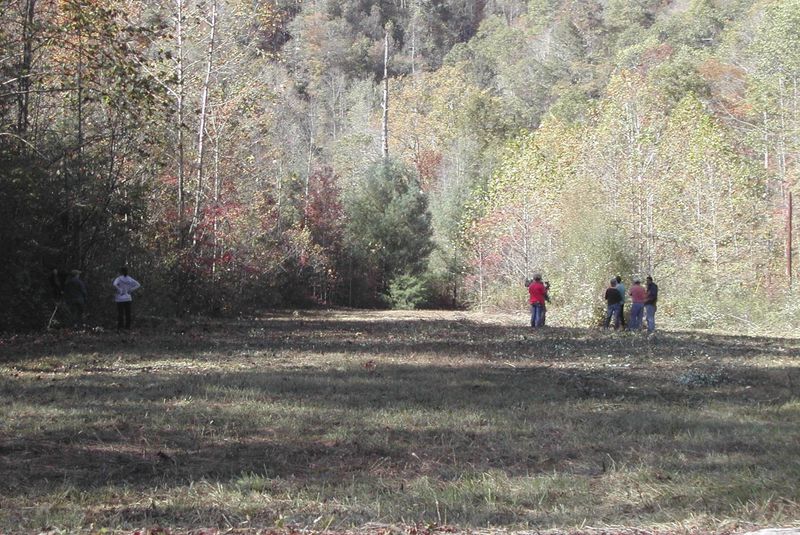 Mary Catherine Brooks/Wyoming County ReportDewey Houck, standing far left, RAIL president, talks with area volunteers and a work team from the College of William and Mary. Volunteers and the college students were clearing brush and trash from a new six-acre community park near the Wyoming County line.

Working with several government agencies and other organizations, Rural Appalachian Improvement League (RAIL) board members are still considering the best uses for the new Guyandotte River Headwaters Boat Launch and Park, near Rhodell, at Stonecoal Junction.

Last week, a work team from the College of William and Mary, several area volunteers, and RAIL board members helped clear brush and trash from the six-acre site, opening the new community park to numerous possibilities.

“We want to get the involvement of as many people and as many agencies as we can,” emphasized Dewey Houck, RAIL president, as the students cut brush.

RAIL obtained the property from the Raleigh County Commission and the two agencies will work closely while developing the site, Houck noted.

RAIL is also working with the Coal Heritage Highway Authority, Mountain Resource Conservation and Development, and Southern West Virginia Community and Technical College, among other agencies to develop the project.

“RAIL has a reputation for turning a sow’s ear into a silk purse,” Houck explained.

In addition to several other projects, RAIL has created a busy community center in the former Mullens Grade School building in south Mullens. Now widely known as the MOC (Mullens Opportunity Center), the center features community gardens and a farmers market in summer months, an outdoor stage for concerts and events, community exercise programs, among numerous other projects to benefit area residents.

The center of the new park will also be a kayak/canoe launch onto the Guyandotte. The park is the headwaters of the Guyandotte, Houck said.

It will be the first launch site on the 160-mile Guyandotte River Trail, which is growing in popularity, Houck noted.

That will give RAIL the first four launch sites on the river trail, with other locations already developed at the MOC, the former Itmann School building, and the New Richmond roadside park.

“This will be a wonderful spot to get out on the water,” emphasized Sam Petsonk, a RAIL board member participating in the cleanup efforts. “I’ve done this stretch of the river.”

Petsonk believes the park will benefit all the small communities dotting the area.

Raleigh County could save on its “jail bill,” the cost of housing prisoners in Southern Regional Jail, by assigning those sentenced to perform community service in the development of the park, Petsonk said.

“Two birds, one stone,” he emphasized.

“I think we can do something with this that can really benefit the community,” emphasized Reece Neely, also a RAIL board member working at the site last week.

You can also drive the trail, staying close to the river all along the way, explained James Frye, an AmeriCorps VISTA volunteer working with RAIL.

“You can have breakfast in Beckley and dinner in Huntington,” Frye said.

Kiosks have been installed at several of the more than 20 launch sites along the river trail, providing historic facts and valuable information about riding the river, Frye noted.

A cultural center, focusing on the area’s rich coal mining and railroading histories, is also planned.

“You could get on a train right here,” Houck explained of the site, “and ride the train to New York City. You could actually go anywhere in the country by train from right here.”

To collect and exhibit more of the local history, Houck wants to involve more people from the community.

Stonecoal Junction sits in the middle of the historic Winding Gulf coalfields, surrounded by nearly 30 coal camps within a 10-mile radius, Houck noted.

At one time, the Raleigh County location was a railroad yard for C&O and an interchange with the Virginian Railroad, Houck said.

“It was an important passenger train exchange for people from other areas traveling through the coalfields,” Houck explained.

“It was named in honor of a former slave, who was an eminent state educator and president of West Virginia State College.

“We want to try to grow trout,” he said.

First, Houck said, RAIL will be working with other agencies to develop a plan to clean the mine water.

Stonecoal Junction was a hub of activity for many years and Houck believes it can be again.