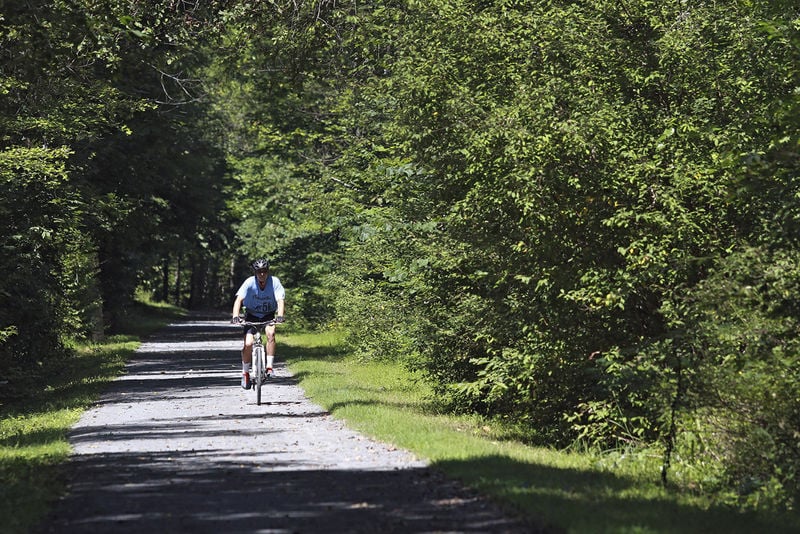 A bicyclist rides on the Greenbrier River Trail near Caldwell. (Jenny Harnish/The Register-Herald) 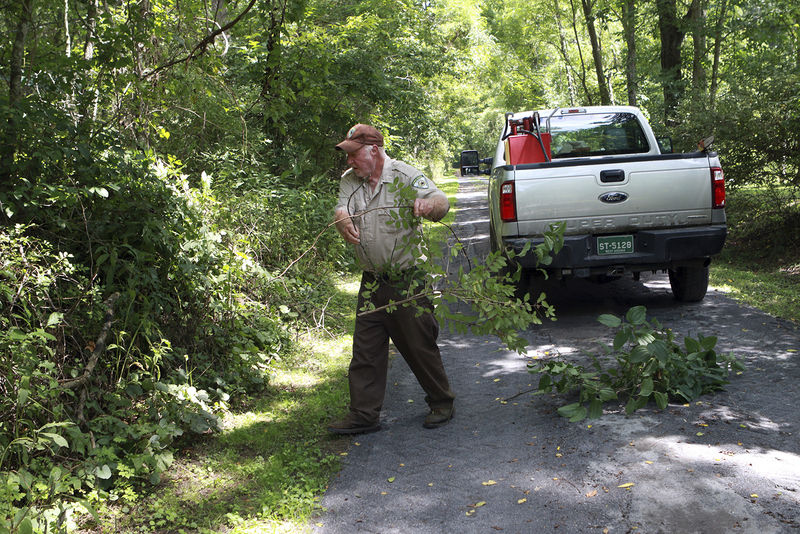 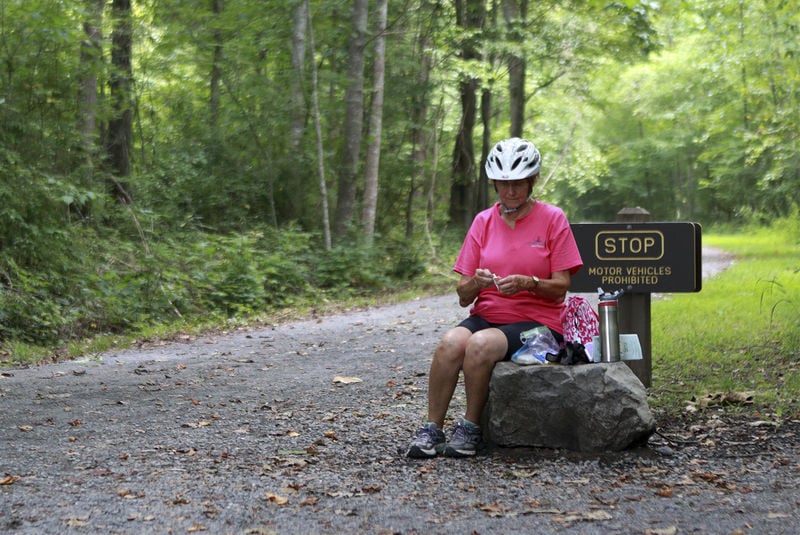 Kathy Michaels, from Oakland, MD, takes a break after biking from Caldwell to Anthony on the Greenbrier River Trail. Michaels came from Maryland to camp at the Greenbrier State Park and ride the trail. (Jenny Harnish/ The Register-Herald) 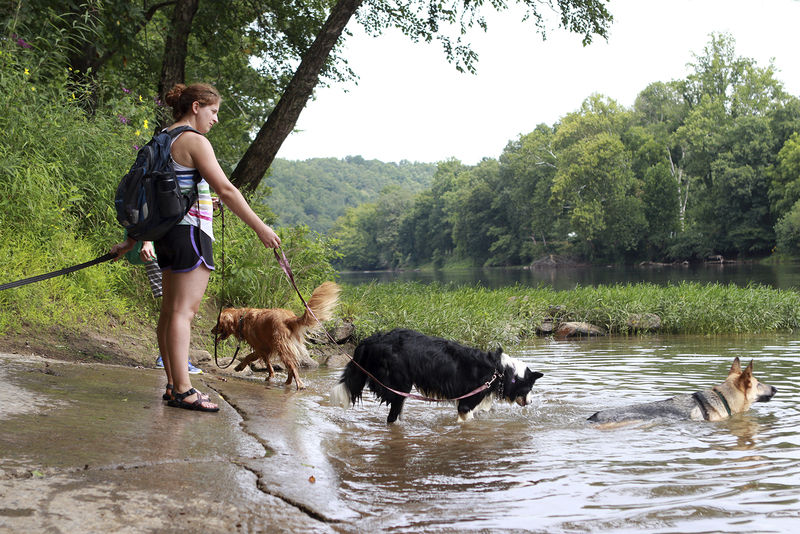 Elizabeth Johnson lets her dogs in the river for a swim while walking them on the Greenbrier River Trail near Caldwell. (Jenny Harnish/The Register-Herald)

But what do you do when life hands you a mammoth mudslide? If you work for the West Virginia State Parks system, apparently you climb it like you would any other hill in the Mountain State and carve a trail for others to follow.

Faced last summer with what Greenbrier River Trail superintendent Jody Spencer termed “the mother of all landslides,” State Parks officials and the trail’s many supporters set out to find a way to restore one of the Greenbrier Valley’s major outdoor adventure attractions.

While early plans called for hauling away the thousands of tons of debris blocking the trail near milepost 13, the true solution turned out to be as simple as it was ingenious. Rather than spending months carting the debris away, contractors who were working on the problem asked, why not just stabilize the 400-by-150-foot mudslide, contour its edges and run the trail up over it?

The plan worked like a charm, and last month the southernmost portion of the rail-trail reopened for the first time since the June 2016 flood sent trees, rocks, mud and more down the mountain and onto the path.

“It was a brilliant idea,” remarked Leslee McCarty, president of the Greenbrier River Trail Association.

“FEMA and the state really came through,” she added. “I was very impressed at the speed (with which) they got it done. Of course, there was pressure on them by us and others. We had a lot of community support.”

And the cost of executing the contractor’s plan – just over $300,000, according to the state Department of Commerce – was much less than the $2 million estimate for removal of the mudslide.

Much of the minor work, such as clearing the trail and drainage ditches of debris, was completed by Department of Natural Resources (DNR) staff and volunteers, which helped keep the restoration costs down, Commerce officials said.

FEMA (the Federal Emergency Management Agency) will reimburse the DNR for 75 percent of the costs connected to the trail’s restoration. That reimbursement process is now under way.

One of the many vocal supporters of the trail’s relatively rapid restoration was Alinda Perrine, owner of Free Spirit Adventures & Bike Sales. The website of the Harts Run business Perrine and her husband have owned for more than 20 years describes Free Spirit as kind of a vacation facilitator, with such services as bicycle sales, trip planning, providing shuttles to and from the nearby Greenbrier River Trail and repairing and renting bikes.

Perrine is blunt when speaking of the impact the closure of the southern end of the trail last year had on her business, noting she was forced to cut off some employees.

“While the trail was closed down, we saw at least a 75 to 80 percent reduction in our out-of-town business. And local people didn’t buy bicycles either; the trail is the backyard for this community.”

She added, “We’re still down – significantly impacted. This is our busy season (ordinarily), but our reservations for fall are down. I believe it will take two or three years to get back to normal.”

Most visitors don’t just happen upon the trail; they plan vacations around the destination.

“People plan these trips six to eight months – even a year – in advance,” Perrine said. “And once you get off their radar, it’s hard to get back on.”

The trail’s southern terminus is at Caldwell, only a couple of miles up the road from Free Spirit.

“People come here to ride the trail, but there’s also excitement about the other amenities in the surrounding area,” Perrine noted. “It generates a lot of business for everyone.

“When people found out the southernmost end of the trail was closed, they decided not to come last year, and a lot of them haven’t come this year either,” Perrine said. “They want at least a 25-mile experience; some want the entire 79 miles, or they just won’t do it at all. We ride a lot of trails, and you want to ride the whole thing.”

“I called the state and tried to impress upon them how important the trail was to businesses like mine, both for bringing in visitors and for the physical and mental health of our local residents,” she said.

“Along with some other people, I started the ‘Heal the Greenbrier River Trail’ nonprofit to raise funds and volunteer where needed.”

The group plans to help with other enhancements to the trail now that the heavy lifting is done.

“There’s nowhere to get water on (the southern end of) the trail anymore; that’s a safety issue. There’s no place to sit down and rest — like a picnic table or a bench. We want to help restore those amenities to the trail.”

With a goal this year to recapture 20 to 25 percent of the business she lost when the trail closed, Perrine realizes time is short. The trail season in this part of West Virginia generally runs only until Nov. 1.

“We’re very positive (business) will come back,” she said. “Already, local people are down there on the trail in droves. We’re renting bikes every day, shuttling every day. It’s picking up. It just takes time and work and a whole lot of marketing.”

She’s gotten feedback from her customers as they ride the somewhat altered topography of the trail. Some of the comments have been negative — the lack of picnic tables is an issue that should soon be corrected — but people seem to have embraced most of the changes, Perrine said.

“They love the surface,” she said, explaining that from the Caldwell terminus all the way up to milepost 13, the trail was resurfaced with a sand gravel, which is much finer than the standard gravel found on the rest of the expanse.

There are also different views to enjoy and more accessible stretches of riverbank due to the intentional re-contouring done by contractors, coupled with the alterations made by Mother Nature during last summer’s flood.

“People riding the trail for the first time since the flood can’t believe how different the river looks,” Perrine said.

And as time goes on, she added, the new ‘hump’ in the trail over the mudslide “isn’t going to look as harsh.”

Unlike Perrine, Stu Schwab was new to owning a bike shop in the summer of 2016, so he had little with which to compare his sales.

“I’m not the kind of guy that tracks where every person in the shop comes from, but (the trail being closed) definitely affected me,” he said. “Last year was my first year in my own shop — I opened on March 4 — and it had an impact on my business.”

With the trail once again fully accessible, Schwab is seeing the success he had hoped for when he opened the doors of Appalachian Bicycle Company in downtown Lewisburg last year.

“Now that word’s out that the trail’s reopened, there’s a big difference,” he said. “The locals are getting back on the trail again and need to get their bikes tuned or repaired, and visitors come in because they have a cracked helmet or something.”

Schwab added, “I see a lot of people from the trail – whether it’s locals that utilize the trail every week or people from out  of town.”

He is also personally familiar with the Greenbrier River Trail, pointing out, “My whole family has a big reunion every year at Seebert – right on the trail. And my wife and I – we ride, we swim – we pretty much use it all.”

McCarty noted that, long before last year’s flood, the Greenbrier River Trail Association had assembled a funding package that allowed it to purchase about five acres of land near the trail’s terminus in Caldwell.

“We saved (the land) for the state to use as a parking lot for the trail,” McCarty said. And now that the state appears to have the money to complete the project, that parking area also will include restrooms and a changing area.

This won’t be the first time the GRTA has contributed funding to enhance the trail, McCarty pointed out. By adding amenities to the trail, the nonprofit has helped grow the local economy.

Asked for an opinion as to why the trail’s restoration from last summer’s natural disaster happened relatively quickly, compared to the repairs that languished for some six years after the infamous flood of 1985, McCarty noted that the trail has grown enormously as a tourist attraction and as a recreational site for local residents in the past 30-plus years.

“There’s more lodging, food, camping – and all of them rely on the people using the trail. It’s a bigger constituency now; there’s a greater awareness now. It’s an asset.”

Just how much of an asset would be up for debate, if not for the fortuitous timing of a state study on the trail’s economic impact.

Sam England, chief of DNR’s Parks and Recreation Section, advised Greenbrier County commissioners in July 2016 that the study indicated the trail’s overall economic impact is around $3.5 million in “fresh money” – money spent by people who have traveled more than 50 miles to use the trail. However, that figure does not include trail-related spending by the local population.

In a statement issued recently, England spoke appreciatively about the repairs done to the southern end of the trail.

“We’re pleased that restoration is nearly complete, and the trail is once again passable all the way from Caldwell to Anthony,” he said. “Outdoor enthusiasts can once again enjoy the full beauty of the trail just in time for late summer vacations, weekend excursions and the fall leaf peeping season.”

For more information about the Greenbrier River Trail, visit www.greenbrierrailtrailstatepark.com.

To find out more about the nonprofit Greenbrier River Trail Association, visit wordpress.greenbrierrivertrail.com.