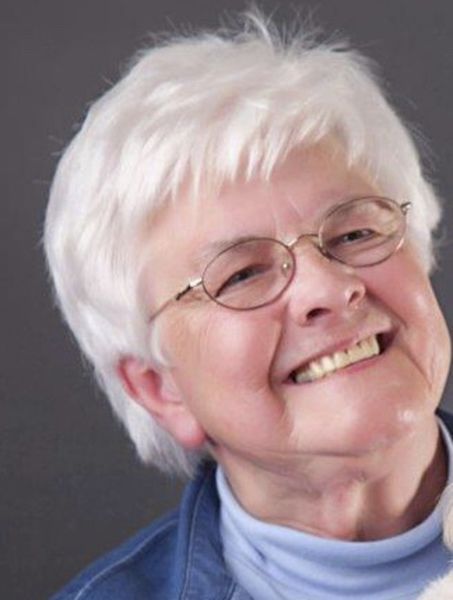 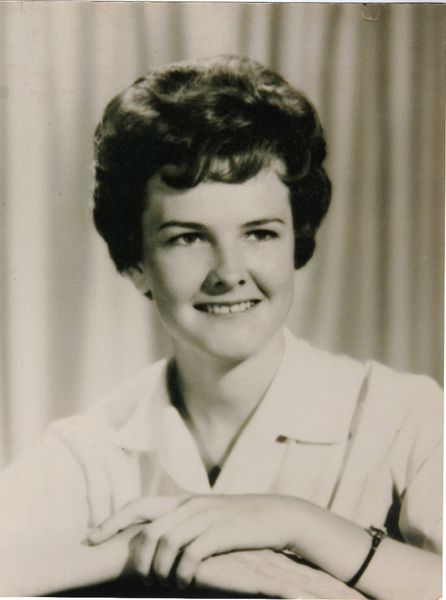 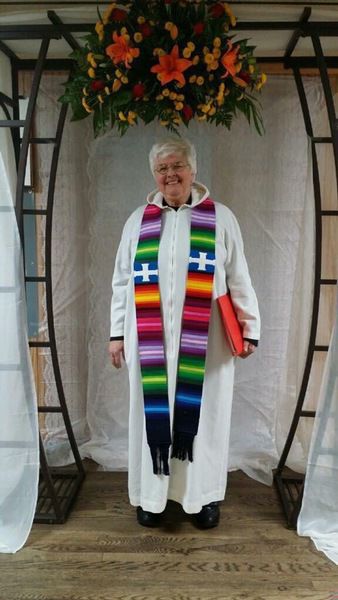 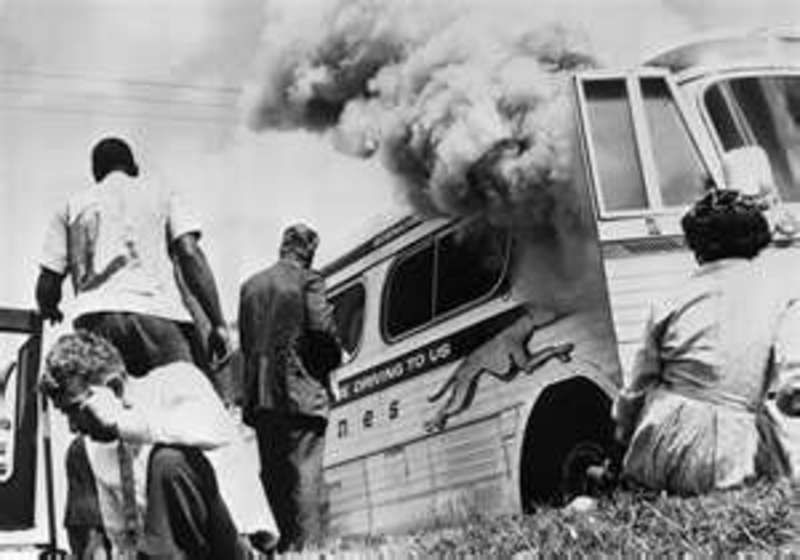 This was the first bus Freedom Riders boarded. Browning — who was on the last Freedom Ride, traveling by train, not on a bus — says protesters "tried to kill everyone" on that first bus, hammering home the very real danger Freedom Riders faced in 1961. 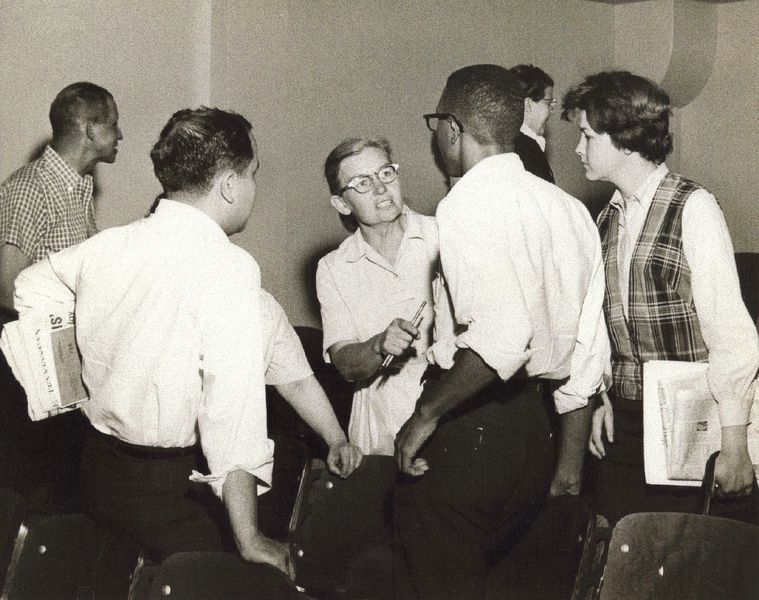 This was the first bus Freedom Riders boarded. Browning — who was on the last Freedom Ride, traveling by train, not on a bus — says protesters "tried to kill everyone" on that first bus, hammering home the very real danger Freedom Riders faced in 1961.

Growing up on a tiny “truck farm” in rural Georgia in the 1940s and ’50s, Joan Browning attended a two-room school, worshiped at a little Methodist church and picked cotton alongside black laborers when her family could afford to hire outside harvesters. Those farm workers were the only African Americans young Joan encountered during her childhood in the segregated south, hardly a harbinger of what her future would hold.

Because Joan Browning became a Freedom Rider — one of only four southern white women to hold that distinction among a cadre of 436 Freedom Riders, of whom fewer than 50 are still living. And she paid a price for her participation in the freedom movement — kicked out of college, incarcerated, and disowned by her family.

A resident of Greenbrier County for many years, the 77-year-old Browning is widely respected today for her continuing social justice activism.

“For me, working for racial integration was like going to church; it was just something I had to do,” Browning said in an autobiographical chapter titled “Shiloh Witness” in the University of Georgia Press book “Deep in Our Hearts,” which presents the recollections of nine white women who were involved in the freedom movement — the civil rights movement.

Browning’s entry into that movement began soon after she left home to enroll in Georgia State College for Women at the age of 16. There, she collected signatures on a petition urging that public schools not be closed to avoid integration and, homesick for her close-knit childhood community, found refuge in the bosom of an African Methodist Episcopal church near campus. That combination of social activism and occasional worship at a predominantly black church resulted in Browning’s being forced out of college in 1961, part-way through her junior year.

Her next stop was Atlanta, where she volunteered with the Student Nonviolent Coordinating Committee (SNCC), stuffing envelopes and developing a crush that evolved into friendship with Julian Bond, one of SNCC’s founders, who was later a powerful figure in the civil rights movement and a Georgia legislator. Under the auspices of SNCC, Browning also participated in sit-ins and other demonstrations targeting segregated lunch counters, water fountains, rest rooms and more.

“It just didn’t make any sense to me that black people and white people couldn’t eat in the same restaurant,” Browning told The Register-Herald. “The people who were protesting against segregation were so cool; I was honored to be with them.”

She said she realized, “If you really believe in something, you have to do it.”

Racial segregation had long enjoyed the force of law in the United States, thanks to an 1896 U.S. Supreme Court decision in a case styled Plessy v. Ferguson, which said railroads could require black passengers to sit in “separate but equal” cars. That ruling was widely applied to all sorts of public accommodations, from buses and trains to theaters and schools, particularly in the south.

The high court finally reversed Plessy in December 1960, and Freedom Rides — which were organized to test public transportation’s compliance with the court’s latest decision — burst into the news in the summer of 1961. The riders (called testers within the movement) were often met with police brutality, violent protesters and imprisonment.

Immersed in the nonviolent freedom movement through the SNCC, Browning knew that the planned Albany (Georgia) Freedom Ride would require nine participants — eight testers, evenly split between black and white, and one observer. The role of observer was crucial to protect the testers, who might be arrested for attempting to integrate the train. Standard in integration tests, an observer often was the only witness, other than the testers, who could be relied upon to tell the truth in court and to the press, Browning noted.

Eager to “do something,” Browning volunteered to be a tester in what would prove to be the final Freedom Ride.

“I got to be the last person chosen for the last Freedom Ride,” she said with pride in her voice.

Prior to boarding the Albany-bound train in Atlanta on Dec. 10, 1961, all nine of the participants, including 19-year-old Joan, wrote out their last wills and testaments.

“We all thought we were going to die,” she said.

But just in case they lived through the test but couldn’t immediately return home, Browning followed the designated observer’s instructions and stuffed a pair of clean underwear and a toothbrush into her purse.

The train ride was punctuated by the conductor ordering the group’s four African American testers out of the “white” car. When none of the four moved, the conductor allowed all of the group to sit together, and the train continued.

A stop in Macon to let off and take on passengers was longer than usual, leading to some uncertainty for the Freedom Riders.

“My understanding was that the railroad people were calling train headquarters to see if they should proceed, or what they should do with us,” Browning wrote in “Shiloh Witness.”

Eventually, the train continued its route to Albany, where the Freedom Riders exited. After spending a short time in the “white” waiting room, the eight testers proceeded into the parking lot, where they were greeted by around 50 cheering black people and a few white hecklers, Browning recalled.

Once she was inside a taxicab ready to depart the train station, Browning breathed a little easier, but it was only a momentary respite. She was pulled out of the taxi and placed under arrest. Counting Browning, 12 people were arrested, a tally that included three white men, two black men, two black women who had boarded the train in Atlanta, SNCC field secretary Charles Jones and two Albany State students.

“I was the only white woman in the group, so I was in a cell by myself,” Browning said.

Released from Albany City Jail after a couple of days, pending a court date, Browning stayed with local allies until once again being incarcerated following what she characterizes as a “mockery of a trial.”

In the Dougherty County Jail after the trial, she and the other Freedom Riders wrote notes to one another on “scraps of paper, napkins, paper towels,” Browning wrote in “Shiloh Witness.” Those “scraps” are now part of the Joan Browning Collection at Emory University.

Browning was embarrassed, yet proud to stand on principle, at the time of her incarceration, and she remains indignant over the Freedom Riders’ arrest.

Browning said law enforcement officers could have made a different decision. “We were obeying the law, and the police in Albany were not.”

Freed after being jailed for a total of 10 days, Browning learned that she had been “written out” of her family and that she would not be welcome to return home for Christmas, something she refers to in her writings as an “unimaginable” consequence of her activism.

With her personal life turned upside down, Browning redoubled her devotion to social activism and continued her spiritual journey. Her Atlanta apartment became a gathering place for people associated with the ongoing freedom movement.

For a while, she maintained her full-time employment at Emory University, which, she noted with a chuckle, “didn’t even dock me for the time I was in jail.”

Despite having taken on the challenge of being a Freedom Rider, Browning said she never considered herself a leader in the civil rights movement. Instead, she said she felt it was her role to be a follower — to defer to the African American leadership.

“I always felt that I was a guest in the movement,” Browning said. “This was their movement. I was there to be helpful, and they could tell me how best to do that.”

During the intervening years, Browning has remained involved in social justice battles, including in recent years the fight for LGBTQ and women’s rights. She is a writer and historian, a retired accountant, an ordained preacher and a popular speaker, always willing to share her personal history with an audience.

Browning admits to deep disappointment over the re-emergence of virulent racism in America in recent years. It has even reared its ugly head in her adopted home in the sleepy Greenbrier Valley.

“In 2000, the KKK distributed fliers in the Alderson area inviting people to a white supremacist rally,” she said.

She joined forces with Adrienne Biesemeyer, a longtime resident of the area and daughter of famed performer and civil rights activist Harry Belafonte, to organize a counter-protest. Their event outdrew the KKK rally nearly 10-to-1, Browning noted.

But the event also triggered what ended up being a five-year ordeal of threatening telephone calls for Browning. After lying low for a while, she said she resumed her usual routine.

“I can’t just go through life afraid,” she said.

That also held true when she was subjected to similar threats during an unsuccessful 2008 run for a seat in the West Virginia House of Delegates. By then, Browning had added caller ID to her telephone and, thus, knew that the calls from two people threatening to shoot her originated in a local bar.

Despite the threats and other setbacks, Browning considers hers to be a life well-lived.

“Between 1959 and 1963, our goal came out of churches — to establish the Beloved Community,” Browning said. “We were there to say it’s possible. I sleep well at night.”