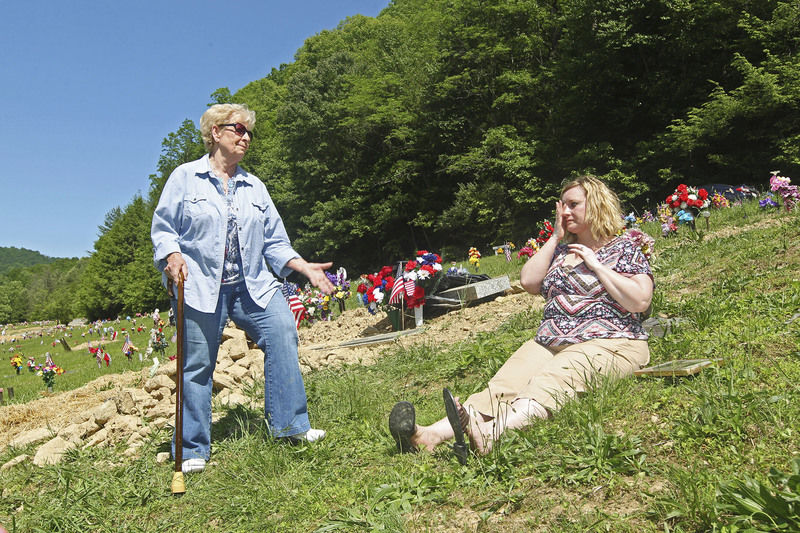 Chris Jackson/The Register-HeraldShirley Thompson, left, talks about her late brother Jack Taylor’s grave — behind them — with his daughter Robin Goode, right, as she wipes a tear from her eye at Palm Memorial Garden Cemetery in Matheny on Monday. Taylor’s grave has been left with rocks and other debris on it with no explanation as to why or when the material will be removed. 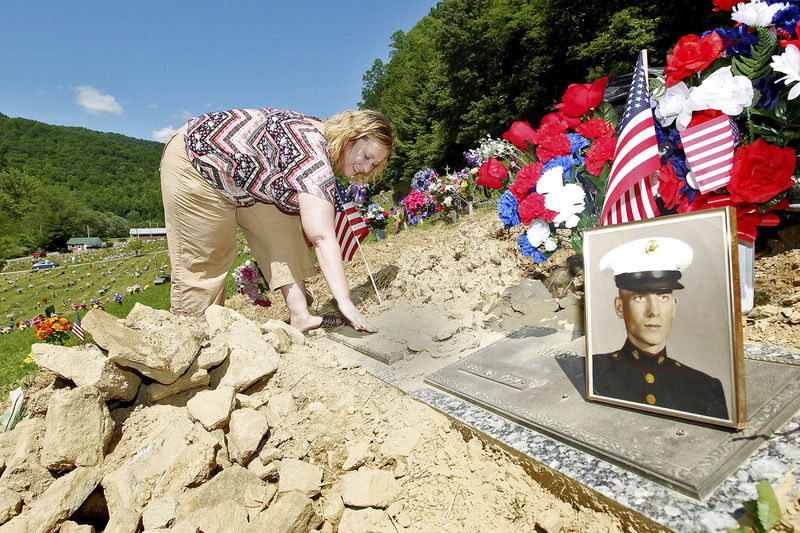 Chris Jackson/The Register-HeraldRobin Goode brushes off the grave of her father, Jack Taylor, a veteran, at Palm Memorial Gardens cemetery in Matheny Monday.

Chris Jackson/The Register-HeraldShirley Thompson, left, talks about her late brother Jack Taylor’s grave — behind them — with his daughter Robin Goode, right, as she wipes a tear from her eye at Palm Memorial Garden Cemetery in Matheny on Monday. Taylor’s grave has been left with rocks and other debris on it with no explanation as to why or when the material will be removed.

Chris Jackson/The Register-HeraldRobin Goode brushes off the grave of her father, Jack Taylor, a veteran, at Palm Memorial Gardens cemetery in Matheny Monday.

MATHENY – Palm Memorial Gardens promises to help families memorialize every life with dignity. That was a selling point for Robin Goode when she was looking to purchase a burial plot for her father, Jack Taylor.

Taylor, a decorated Vietnam veteran, wanted to be buried in a National Cemetery, but Goode told him Palm Memorial would be closer to his family. Taylor agreed and shortly after Good Friday 2001, Taylor was laid to rest on a hillside high above the rest of the cemetery.

When Goode went to visit her father on Sunday to plant an American flag on the veteran’s grave, what she saw enraged her – a grave completely covered with large rocks, the flower vase shattered and straw littering the edges. But perhaps most upsetting, she said, was the Veterans Affairs volunteers were unable to place a flag on his grave, since his headstone was covered.

She said it’s unclear how the large rocks got on her father’s resting site. Also as troubling is why the straw is around his grave, as the neighboring headstones read death dates from 1973 and 1999.

Goode said after seeing the state of her father’s grave, she now regrets not allowing him to be buried in a National Cemetery. “I just point blank told him ‘No,’ he wasn’t going to be buried at (Culpeper National Cemetery) because he has several family members buried here,” she said. “Now I wish I listened to him.”

Taylor’s sister, Shirley Thompson, said upon seeing the disarrayed grave over the Memorial Day weekend, the trauma was worse for her than him dying in 2001.

“I just cried,” said Thompson, who was cradling her older brother in her arms when he died.

Taylor’s family isn’t alone in saying their loved ones’ burial sites are ill-kept and disrespected by Palm Memorial Gardens.

State Sen. Sue Cline has a number of family members at rest in Palm Memorial Gardens, including a grandparent, cousins, aunts and uncles. Her grandmother’s grave site is besmirched with clumps of mud and other debris. A cousin’s grave has muddy tire prints running over the ground marker, she said.

“I don’t know the reason,” she said about the sorry shape of her grandmother’s grave. “But it’s uncalled for.”

Another person asking questions of cemetery employees is Stephen C. Sluss, an attorney in the Charleston area. His father, Al, is buried not far from Goode’s parent.

“He wanted to be buried here, because it offered perpetual care,” said Sluss. After a pause, he asked where the upkeep of his father’s grave was.

A walk around the cemetery shows piles of dirt and rocks piled on top of other graves, clumps of asphalt lying around along with discarded paper and other debris. Grave markers were skewed, broken or cracked.

Palm Memorial Gardens has a history of complaints. In the last few years, there were a number of complaints concerning the physical condition of the cemetery and tombstones.

Family members complained that grave sites were damaged and disheveled. Some of the complaints stated that phone calls weren’t returned and direct answers are never received from rude employees. Goode said she tried to call cemetery employees about the state of her father’s grave, but was given a wrong number and heard back from another employee.

A Facebook page called The Palm Memorial Gardens Complaint Group has 685 members, including Raleigh County’s Assessor Drema Evans. A plethora of photos shows flooding, broken tombstones and piles of dirt on grave sites. There are also complaints about plaques not being placed at grave sites in a timely manner.

An employee who identified herself only as Tina issued a “no comment” when asked about Goode, Cline and Sluss’ situation. An email to John McNamara, a director whose name is on press releases for StoneMor Partners, the owner of Palm Memorial Gardens, went unreturned.

StoneMor Partners operates 33 cemeteries in West Virginia, including Sunset Memorial Gardens in Beckley. The company has a market cap of $832.41 million.

During a recent conference call with investors, StoneMor’s CEO Larry Miller said, “The restructuring of our sales organization is continuing, we have consolidated our 10 regions into seven and are continuing our recruiting campaign to ensure we develop a higher quality and more prominent sales force.”

Not once during the conference call did a StoneMor executive mention upkeep of properties, according to a transcript.

But what executives say to stockbrokers has little concern to Goode, Sluss and Cline, who just want a presentable grave site for their loved ones.

Cline said she will reach out to West Virginia’s attorney general to see what action that office can take.

Sluss said he is considering legal action for breach of contract against the cemetery.

And Goode just wants answers. “Nobody can give me an explanation on why there are rocks on my father’s grave, why his vase is broken,” she said. “I find it very disrespectful to my late father.”