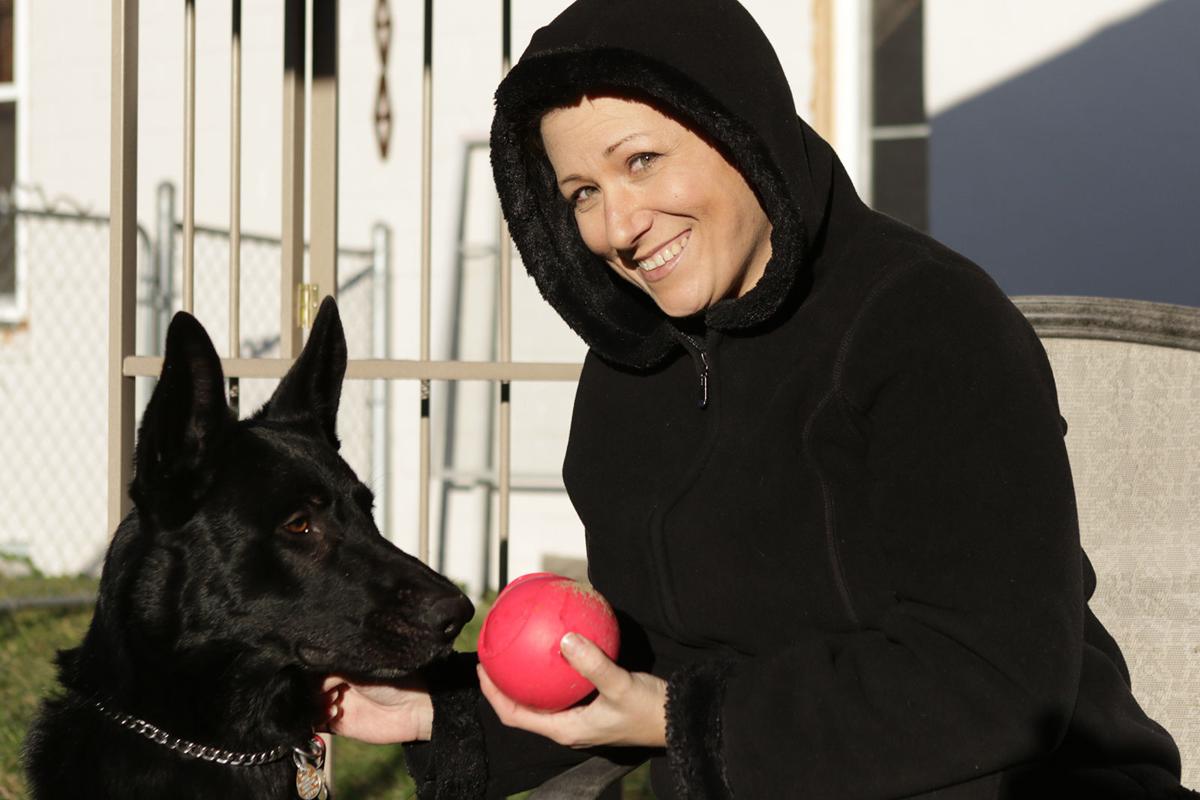 Francie Floyd with her dog Segen, who is trained to warn her when she’s about to have a seizure. (Jenny Harnish/ The Register-Herald). 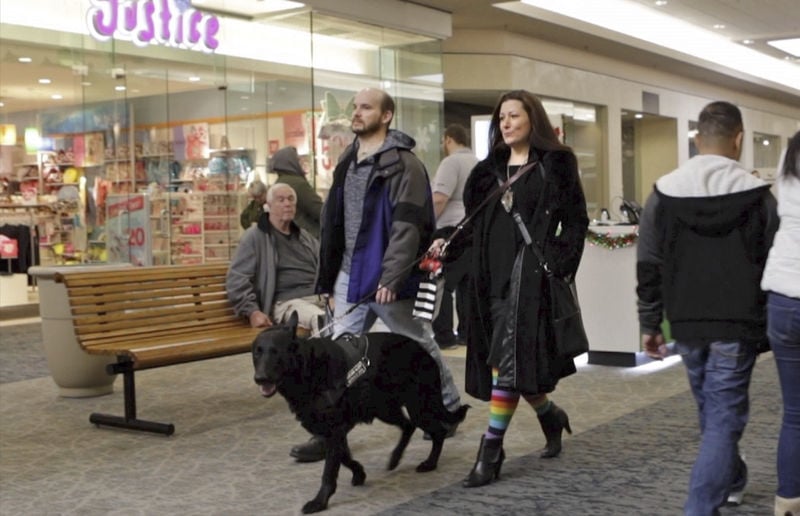 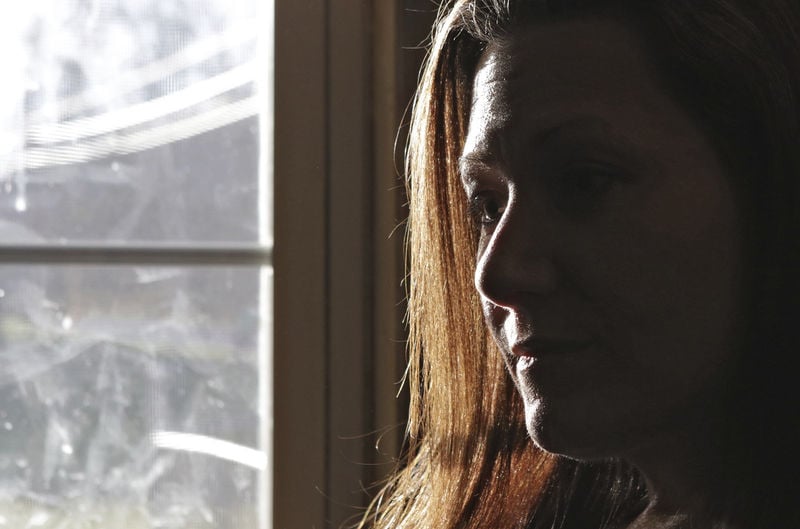 Francie Floyd has been suffering from seizures since she was an infant. She wishes she had the option of medical marijuana as a treatment. (Jenny Harnish/ The Register-Herald). 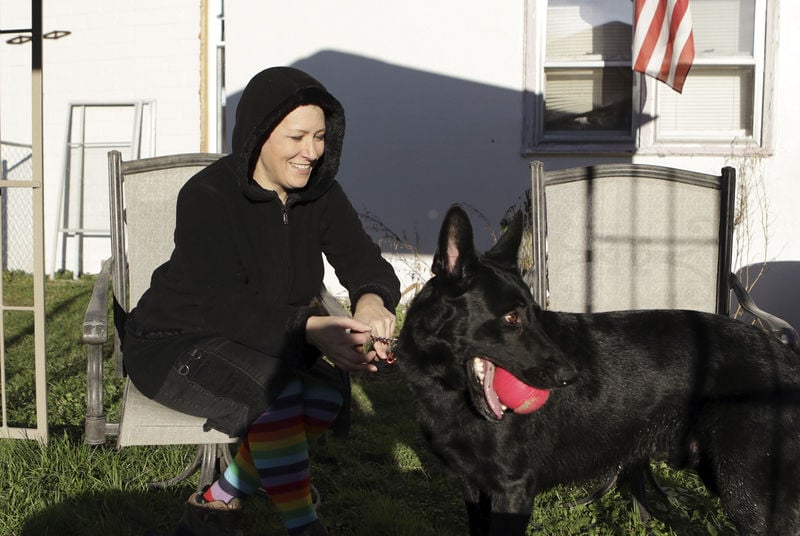 Francie Floyd with her dog Segen, who is trained to warn her when she's about to have a seizure. (Jenny Harnish/ The Register-Herald).

Francie Floyd with her dog Segen, who is trained to warn her when she’s about to have a seizure. (Jenny Harnish/ The Register-Herald).

Francie Floyd has been suffering from seizures since she was an infant. She wishes she had the option of medical marijuana as a treatment. (Jenny Harnish/ The Register-Herald).

Francie Floyd with her dog Segen, who is trained to warn her when she's about to have a seizure. (Jenny Harnish/ The Register-Herald).

Every step throughout her day, from brushing her teeth to cooking dinner, Francie Floyd is protected by a 110-pound black German Shepard.

Heads turned as Floyd strolled the Meadowbrook Mall with her boyfriend, Matt Daugherty, on her left, and her dog, Segen, on her right.

Since Floyd was an infant, she’s been having seizures. A high-grade fever when she was less than two months old triggered the first.

Medication controlled the seizures during her early childhood. But, as she grew older, her body grew increasingly tolerant.

“I call it the floppy fish dance,” she said with a smile as she described her most violent seizures. “You have to put humor into it. If you’re not laughing, you’re taking life too seriously. It can be soul-crushing, so I call myself a fish dancer.”

The Reynoldsville native has tried to take a light-hearted approach to her condition – left temporal lobe epilepsy – although she has between five and 10 seizures each week. Some seizures cause her to lose track of time, from a few minutes to several hours. Others, known as grand mal seizures, cause her muscles to convulse so violently she dislocates her shoulder.

“It feels like I got hit by a Mack truck,” she said, describing how she feels after a seizure. Headaches, muscle sensitivity and light sensitivity also follow.

Floyd, who just turned 40, keeps a pill box on her dining room table, a handful of meds for morning and another handful for night. She’s prescribed three anticonvulsants, Topamax, Keppra and Vimpat, which come with a host of side effects – loss of bone density, aphasia (loss of ability to understand or express speech), lack of energy, hair loss, dry mouth and loss of appetite.

She’s thankful for her four-legged friend, Segen, whose name means “blessing” in German. Segen can alert Floyd up to 30 minutes before a seizure strikes. Researchers can’t pinpoint exactly how dogs detect oncoming seizures, but some suggest the dogs notice subtle changes in their human’s behavior or scent.

Segen nudges Floyd’s forearm and yowls in increasing volume to let her know she needs to get somewhere safe, somewhere she can’t fall and injure herself. Floyd tries to stay close to home, never more than a few miles away for grocery shopping or pharmacy visits, so — if necessary — she can retreat to her bed until her seizure has passed.

“I’m covered in scars,” she shared as she rolled up her black, long sleeved shirt to show an inch-long, white scar on her forearm. “I’ve taken quite a few hits to the head, too.”

Floyd has worked with a number of neurologists, all of whom have prescribed a cocktail of anticonvulsants, swapping one combination for another as her body grew tolerant.

“It’s been hell,” she admitted, pulling back her long, auburn hair. “Right now, I’m dealing with so many side effects from the meds I’m on and they

For Floyd, aphasia is the worst. At times, when she tries to articulate what she’s thinking, specific words or phrases fail her. She admits the drugs can make her feel “stupid.” She makes light of the effect, calling it a game of “Words with Friends” when her loved ones have to fill in the blank for her.

A few years ago, a neurologist suggested cannabidiol (CBD) oil, an extract of the marijuana plant that is not psychoactive, unlike tetrahydrocannabinol (THC) that creates a “high.”

“She told me I could get off all these drugs that were not helping me.”

Floyd, a university graduate, began researching. She read about a young girl named Charlotte Figi who suffered from seizures.

“What I found was unreal,” Floyd said. “It gave me so much hope.”

The Stanley Brothers, one of Colorado’s largest marijuana growers and dispensary owners, were crossbreeding a strain of marijuana high in CBD and low in THC. While hesitant at first, the growers allowed the Figi family access to the cannabis, which they named Charlotte’s Web.

CNN reported in August 2013 that Charlotte received a dose of the cannabis oil twice a day in her food. At the height of her condition, she was experiencing 300 seizures per day. After using CBD, she only experienced two to three seizures per month.

Charlotte Figi is now a thriving 9-year-old and in her first full year of school – the second grade – according to cwhemp.com, the website for Charlotte’s Web.

Charlotte’s story gave Floyd hope. The oil, she thought, could prevent her seizures or at least lessen their frequency.

But because medical marijuana is illegal in West Virginia, she does not have access.

“I wouldn’t be in this nightmare situation,” Floyd said, tears welling in her green eyes. “I’m sick of being overmedicated. I’m sick of having seizures. I’m sick of the list of things these medications do to you.”

Although many individuals, like Charlotte Figi, have had successes with CBD oil, the American Academy of Neurology (AAN) has not given medical marijuana its stamp of approval for epilepsy – simply not enough evidence is available to determine if the drug can impact the condition one way or another.

AAN reviewed studies in 2014 on medical marijuana’s benefits for a number of conditions, such as epilepsy, Tourette Syndrome, Huntington Disease and cervical dystonia, but only enough evidence was available to reach a conclusion for multiple sclerosis. The study found strong evidence that medical marijuana can alleviate symptoms of spasticity and central pain in multiple sclerosis patients.

Because marijuana and its extracts remain categorized as Schedule I, the same as heroin, studies have been limited because of a lack of access to the drug in a laboratory setting.

Still, the Epilepsy Foundation website says, “Evidence from laboratory studies, anecdotal reports, and small clinical studies from a number of years ago suggests that cannabidiol, a non-psychoactive compound of cannabis, could potentially be helpful in controlling seizures.”

The site further says, “When conventional treatments do not work, as is the case for roughly 30 percent of people with epilepsy, it is not unreasonable to consider cannabis.”

As someone who suffers from frequent seizures, Floyd would like to have the opportunity.

Floyd has never tried self-medicating with marijuana. She’s too afraid of the legal repercussions.

And yet, because of the particulars of her situation, Floyd doesn’t feel like she can just pack up and move to a state that permits medical marijuana.

“I own my house in the free and clear,” Floyd explains. “I have wonderful friends and family here, who all support me and love me. If crap hits the fan, I know they have my back. If I move, that means I’ve got to pay rent. How am I going to do that?”

Seizures prevented Floyd from attending school on a regular basis. She was homeschooled by her parents and a supervising teacher. She graduated from Washington Irving High School and then went on to earn a biology degree at the University of Charleston.

But her condition has progressed to the point that she cannot maintain a full time job. Floyd takes freelance writing opportunities when they arise, but it’s not enough to pay the bills.

Floyd could not survive, emotionally or financially, without the support of family and friends. Her parents, Sissy and Carl Floyd, and her boyfriend, Matt, have been especially helpful.

She considers medical marijuana an opportunity to live a life without seizures — an embrace of freedom and independence.

She is hopeful West Virginia lawmakers will take a look at the benefits she and other patients could realize, but she isn’t getting her hopes too high.

She’s written letters and made phone calls. She’s met with senators and delegates. She plans to continue advocating until she has access.

“I would ask them to take one week of my medications and just try to function... Try to learn what it’s like to be on an anticonvulsant cocktail of three that I’m on every single day of my life and try to function like a normal human being.”

Floyd, with Segen by her side, plans to share her story with lawmakers during the upcoming session.

CHARLESTON — At the end of a marathon 11-hour session, the West Virginia Senate passed a bill Wednesday that will legalize medical marijuana.

[br]RAINELLE [ndash] Betty Jane Scarles, 90, of Rainelle passed away on Sunday, April 5, 2020 at Meadow Garden. Born on January 30, 1930 at Glen Rogers, WV; she was the daughter of the late Haskel Smith and Edna Farris Bradley. In addition to her parents, she is preceded in death by her husb…