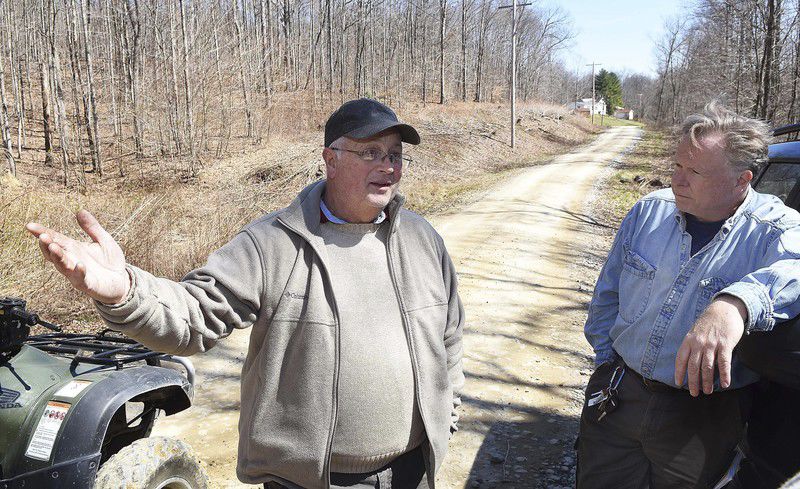 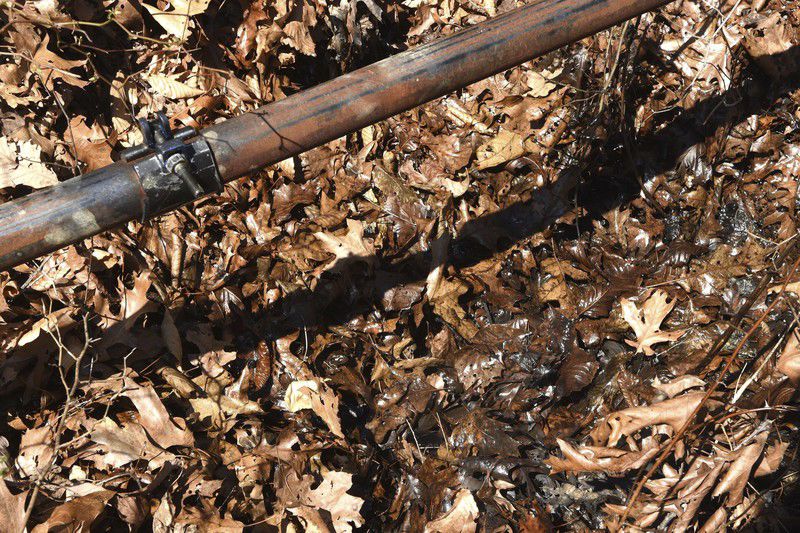 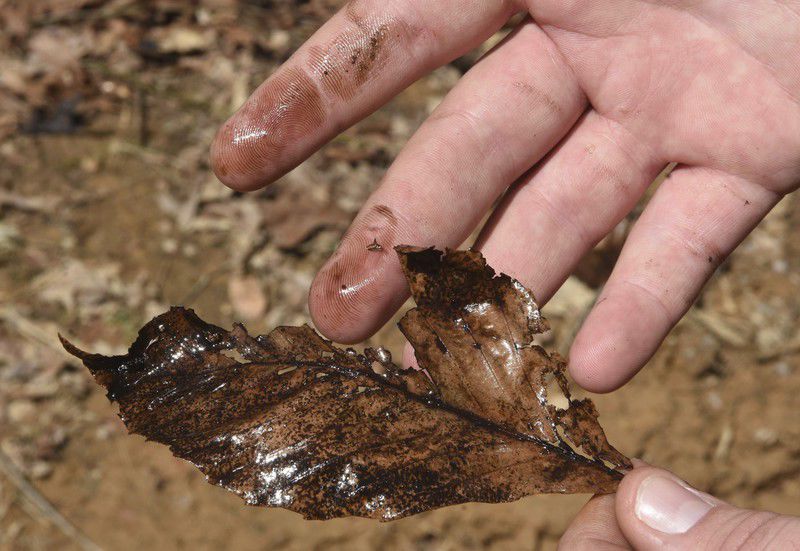 Fluid from the pipe smelled, in part, like diesel and sulphur, and cast a oily sheen on the ground below the leaking pipe. (Rick Barbero/The Register-Herald) 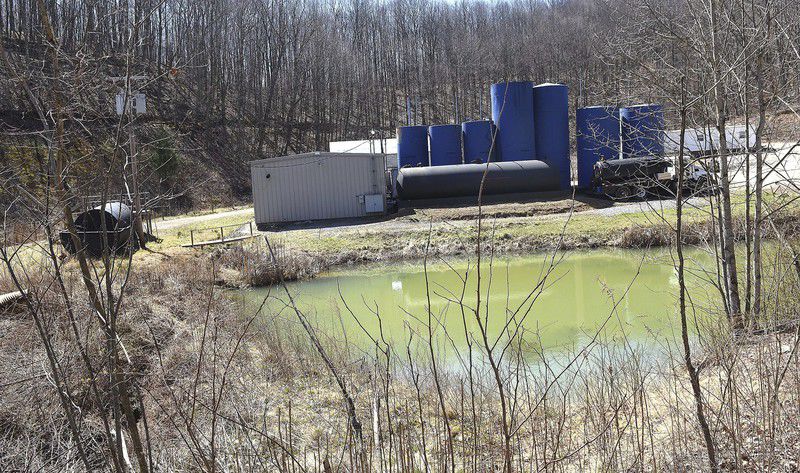 Storage tanks and a pump house at Danny Webb Construction can be seen from Towne Hollow Road in Lochgelly. (Rick Barbero/The Register-Herald) 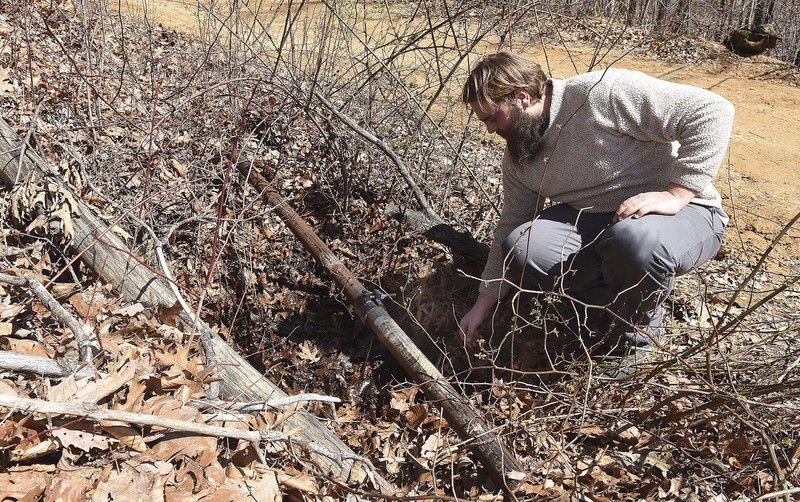 Fluid from the pipe smelled, in part, like diesel and sulphur, and cast a oily sheen on the ground below the leaking pipe. (Rick Barbero/The Register-Herald)

Storage tanks and a pump house at Danny Webb Construction can be seen from Towne Hollow Road in Lochgelly. (Rick Barbero/The Register-Herald)

LOCHGELLY — Brandon Richardson carefully found his footing on the steep red clay trail off Towne Hollow Road as he led the way to the spill he found and reported Thursday morning.

The wind shifted and a strong smell with familiar notes of diesel and sulphur grew stronger as he neared the pipe.

Leaves around the leak, which was still dripping hours later, were darkened and iridescent like an oil spill. Several clamps could be seen along the pipe, which continued up the forested mountain.

"I was out on a routine citizen inspection when I noticed a pipe was leaking and spewing, and I knew the pipe was used to transport waste up to the North Hills Group well and should not have any liquids in it at all," said Richardson, a founding member of Headwaters Defense, a grassroots environmental group that has been concerned about the operation. "The fact this is leaking is completely disgusting. This is toxic material that could really hurt people. That is why we are wondering why this facility is still operating when this company is spilling fluids onto other people's properties."

The West Virginia Department of Environmental Protection responded Thursday to reports of a fracking waste spill at Danny Webb Construction in Lochgelly.

Several leaks were seen along a mile-long above-ground pipe that stretches from Webb's property up a muddy ATV trail to his operation's second underground waste disposal well on property he leases from North Hills Group.

North Hills Group Attorney Kevin Thompson said leaks were spewing fluid when he arrived, as if under pressure.

Charlie Flint, with North Hills Group, said the property owners had their suspicions Danny Webb Construction was still pumping onto their property.

"Deep down I knew. His records show the well on his property is full, but two trucks have hauled fluid since we've been here. There is quite a bit of forested land that has been polluted by these lines," he said.

Flint said the property-holding group attempted to terminate the lease to the well when they found out it was being used to dispose of liquid waste used in the natural gas production process. When the lease was signed for $1 an acre per year they believed Webb would attempt oil production at the site.

"It was meant to be an investment. We thought we could be able to get oil or gas royalties. It never occurred to us he would start dumping fracking material," he said.

Thompson said when he and Flint arrived there were senior DEP officials at the scene. There were personnel at the facility, yet DEP agents jumped a locked gate to access the pumping house at the property that Webb himself owns.

Up the mountain at the North Hills Group well, Thompson said DEP Oil and Gas Inspector Terry Urban would not allow Flint to enter the pump house on his property. Urban told them the gauge showed there was no pressure to the pipe.

"We saw at least four leaks along the pipe, and we both saw and heard it spewing. it was clear there as a problem, and it was clear it was under pressure," Thompson said.

Thompson said Webb was at the facility when he arrived but left soon after.

DEP officials at the scene would not comment on the investigation.

DEP Spokesperson Jake Glance later stated, "We have determined there was a very small amount of material leaked. We are sampling now to see exactly what was leaked. But what happened was a valve was left open on a well and fluid backfed to fill up a line that had previously been emptied."

Brad Keenan's property flanks Danny Webb Construction on the opposite side. In 2007, water samples from his creek showed oil and gas-based contamination, preventing its sale as a horse farm.

Soil and Water samples from Wolf Creek, a tributary of the New River, have now been used for four peer-reviewed academic research papers headed by experts at the U.S. Geological Survey, Duke University, Rutgers University and University of Missouri.

"It's a disappointment," said Keenan. "I'm disappointed in the DEP and the EPA (Environmental Protection Agency). They have this information. These studies prove this waste is in the Wolf Creek watershed, but every day I watch trucks roll in."

Richardson said Thursday's reporting proves that spills must be reported by citizens.

"DEP inspectors aren't going to be the enforcers of justice. It is the community that has to bring justice."

Danny Webb Construction has appealed the lease termination order, and that appeal is expected to be heard before the West Virginia Supreme Court on May 16.

A call placed to Danny Webb Construction was not returned Thursday.