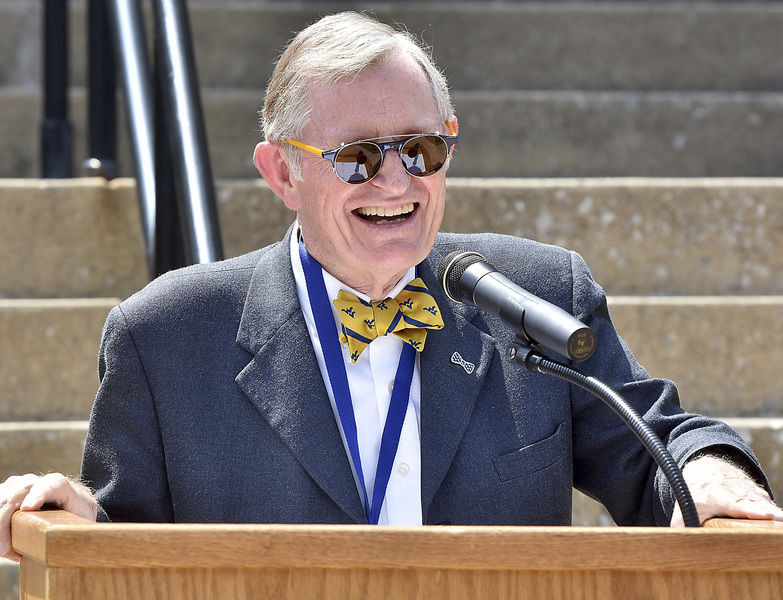 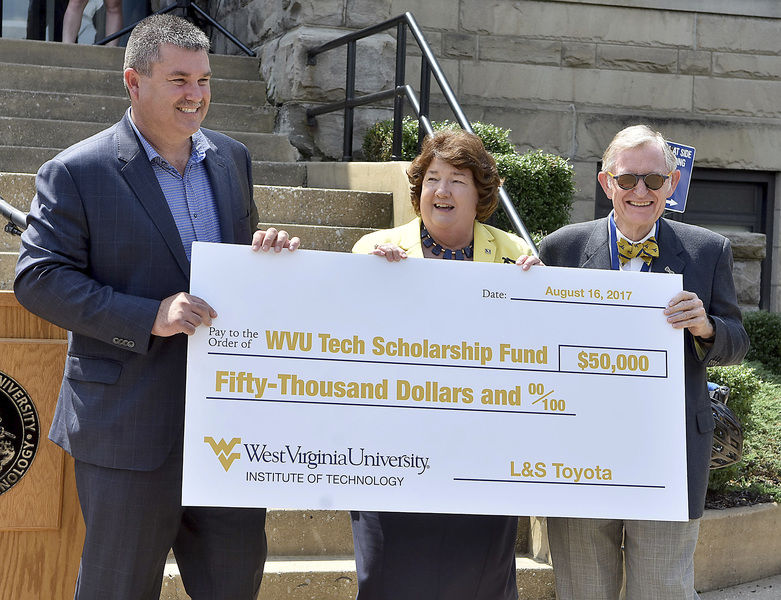 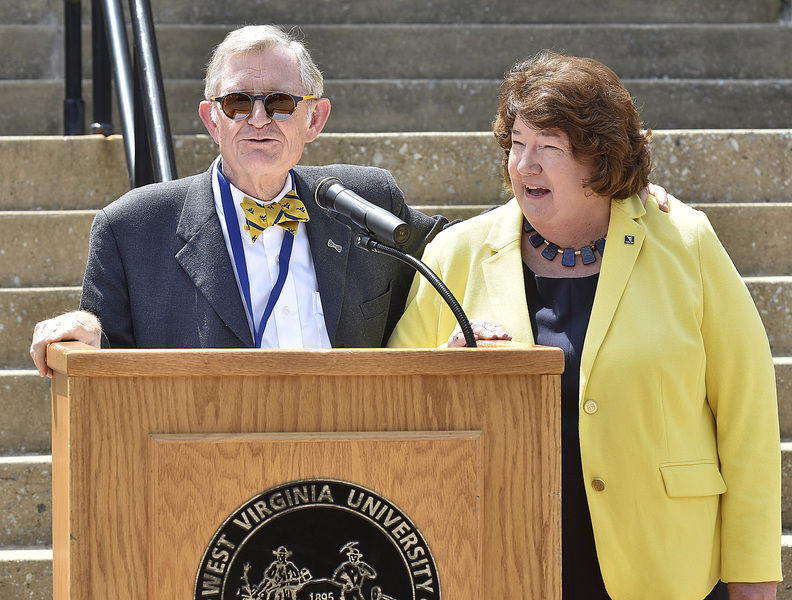 (Brad Davis/The Register-Herald) WVU President E. Gordon Gee puts his arm around WVU tech President Carolyn Long as he heaps praise on her during a speech as part of a brief ceremony marking the first day of classes for Tech on the Beckley campus Wednesday afternoon. 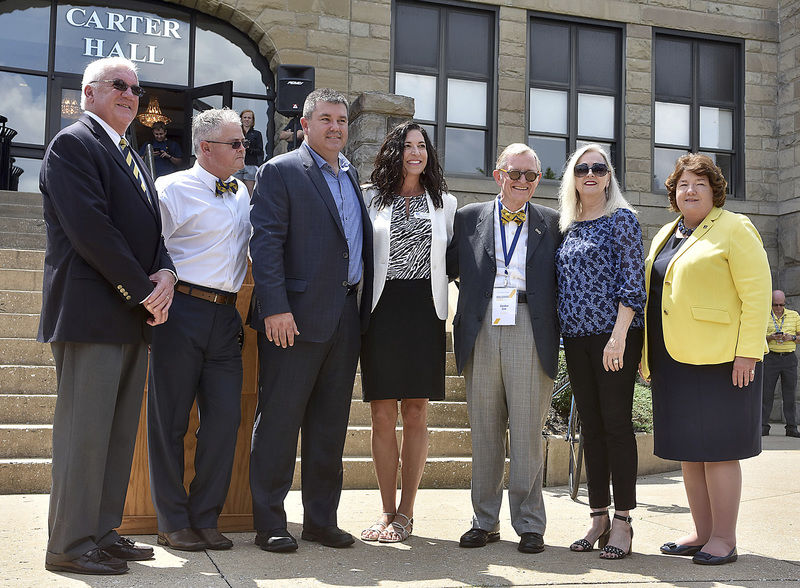 (Brad Davis/The Register-Herald) WVU President E. Gordon Gee puts his arm around WVU tech President Carolyn Long as he heaps praise on her during a speech as part of a brief ceremony marking the first day of classes for Tech on the Beckley campus Wednesday afternoon.

WVU Tech marked its historic first day of classes beginning operations solely on the Beckley campus during a ceremony Wednesday in front of Carter Hall.

With over 1,000 students who began their academic journey at WVU Tech Wednesday, Campus President Carolyn Long said it was very important to her to welcome students to their new home in Beckley with a special day.

"I really want to thank the community on behalf of myself and the students for the support and love they have shown and given us throughout this transition," Long said. "Thank you for being here for us through this transition, even though a transition is still going on. You're going to see boxes stacked up in buildings and you're going to still see boxes on desks. We have rooms that are locked, and still need to be unlocked — all things you would do on a normal day."

Long said she is looking forward to the year together involving the campus and the local community, and she believes a very bright future is ahead for WVU Tech, Beckley, all of Raleigh County and more specifically Southern West Virginia.

"I wouldn't be standing here without the vision of President Gee though," Long said. "He is the gentleman that said 'let's do it,' and in higher education they don't say that very often, especially not do things very quickly."

"This transition was completed quickly, decisively, and I think everyone will now see it was done right," she said.

West Virginia University's President Gordon Gee agreed with Long on how quickly the process came together.

"From the time we decided to buy this campus, from the time you all approved it, to the time we signed the documents, it was a total of 10 months," Gee said. "It was nano-speed in terms of higher education."

Gee said it was most of the utmost importance he thank the people of Beckley, and the great community they provided to the new campus.

The campus will grow, develop and become the economic engine of southern West Virginia, Gee said. "I honestly believe this. I believe with all the things the university will do within the next 10 to 15 years, this will be the most transformative."

Gee said our goal in West Virginia is to keep our people here, keep our towns here and make sure everyone has a job. He joked and said they were going to build a wall around West Virginia, and not let anyone out. "And we're going to make Ohio pay for the wall," he said with a laugh.

"The people in this state are the most valued and resilient I have ever seen," he said. "This is not about education. This is about hope and opportunity, and today, that is what we celebrate."

West Virginia University is now a school with three front doors located throughout the state; one in Morgantown, one in Keyser and now one in Beckley.

"I never want to hear anyone on any of the campuses say they are not at the main university," Gee said. "This is the university, they are all the university. It is stated here, and we are blessed to have it here."

Shawn Ball, of L&S Toyota in Beckley, was one of the first donors to contribute to the Beckley campus.

Long said Ball donated over $100,000 to WVU Tech over the last two years, and she was glad to have the opportunity to partner with him and his wife, Angela, to help students pursue their academic dreams.

Ball donated another $50,000 to the campus Wednesday to go toward nursing and engineering scholarships, bringing in a total of approximately $160,000 being donated to WVU Tech by him and his wife.

"I hope everyone realizes how big of a deal it is to have this campus here," Ball said. "We deserve this, this town deserves this."

He said seeing the streets full with students a couple years ago was an amazing thing to see. "But then to look up and see the streets empty one day, it was awful. Now they're full again, and that is just a really great thing."

"I'm just a dumb kid from Boone County, and all I can do is money," Ball said. "But seeing the work that has gone into the new campus is hard to put into words. What everyone has done is so wonderful, and President Long is magician as far as I am concerned. She's made this process go through so quickly."

Ball explained how he is from the coalfields of southern West Virginia, and growing up, he knew he did not want to leave, so he stayed

"If this campus would have been here years ago, then I know I would have been here. There is no doubt in my mind it is a wonderful school and now it is going to be accessible to a lot of people that may not have been able to go to school because they couldn't leave. And that's why we have donated this money."

Ball made another donation Wednesday to the United Way of Southern West Virginia.

"It was important I give a check to both of these places today," he said. "And one of the main things we know about our future is that we have to educate our children while they are still children. We need to start when they're little. We have to teach them right from wrong, it's that simple."

United Way Executive Director Michelle Rotellini said she was honored to accept the $20,000 donation on behalf of the organization.

"We are so honored this donation was made towards United Way," Rotellini said. "We fight for education, and it is important we introduce our children to a better life so they can break through the cycles and be successful."

Rotellini said United Way is all about education, income stability and health. "The three go hand-in-hand, and the Balls' donation today will go a long way to help children and the people in southern West Virginia."

As the ceremony came to an end, students were able to put print photo messages in a time capsule set to be open during the May 2068 commencement.

Long said this will be the start of seeing oneself as a Golden Bear. "We hope in 50 years when the capsule is reopened students will be able to see all of the excitement and enthusiasm we had on this first day, as we anticipate everything the future holds for us."