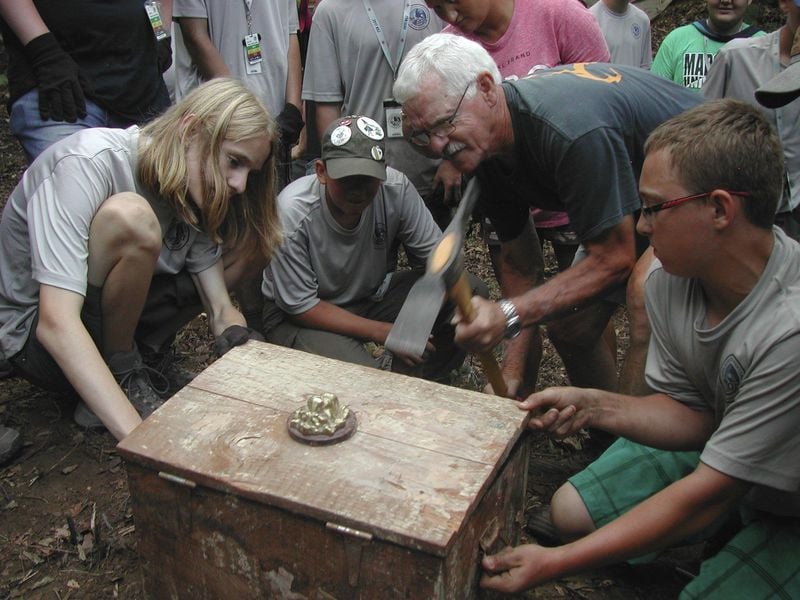 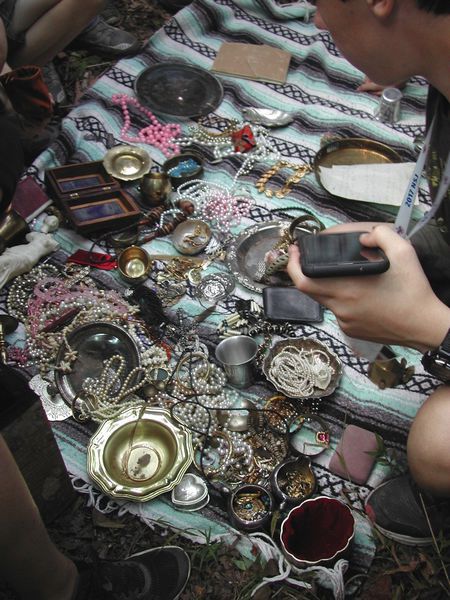 NEW RICHMOND — While Boy Scout Troops from across the nation have participated in community service projects across southern West Virginia, it was a West Virginia Troop that uncovered what appeared to be buried treasure Tuesday morning in Wyoming County.

Thirty-one Boy Scouts from the Huntington area, along with two more Scouts from Colorado, unearthed a large wooden box while constructing a foot bridge in Guyandotte Park, near Wyoming County East High School.

“We're rich! We're rich!” the Scouts chanted as four boys pulled their discovery from the ground.

Wrapped in a deteriorating cloth, there was a key to unlock the large weathered box. However, in the excitement and with Scouts pushing in to get a closer look, the key was lost in the dirt.

The lock was broken with the nearby digging tools to reveal pearls, colorful beads, jewelry, tarnishing metals, campaign buttons from the early 1900s, along with old coins and paper money.

Afterward, pandemonium ensued with Scouts and local volunteers wanting to get a closer look at the discovery.

With one Scout commanding all the items be placed back onto a rug where the new found wealth was laid out, the onlookers were much too curious to follow the instructions.

Some of the Scouts, however, doubted the authenticity of the discovery, wondering about the age of the items included in the weathered box and the gluey remains of a vanished sticker on the bottom of a small statue.

A faded letter instructed the "finders to keep" the treasure and Dewey Houck, president of Rural Appalachian Improvement League (RAIL), said as far as he is concerned, that is exactly what will happen.

“The letter said it belonged to the finders,” Houck said.

“They found it; they should take it with them as far as I'm concerned.”

As to who buried the treasure, or when it was placed in the ground, or from where the loot could have come may be a mystery that is never solved.

Under the direction of Houck and the RAIL staff, the Scouts were making improvements to the small roadside park on the Guyandotte, including new signage, improved walking paths, a river access point and a new foot bridge.

Much of the work on the park thus far has been completed with college students who participated in service projects during their spring breaks.

The park is one of several tourism projects Houck is coordinating to lure more visitors to the area.