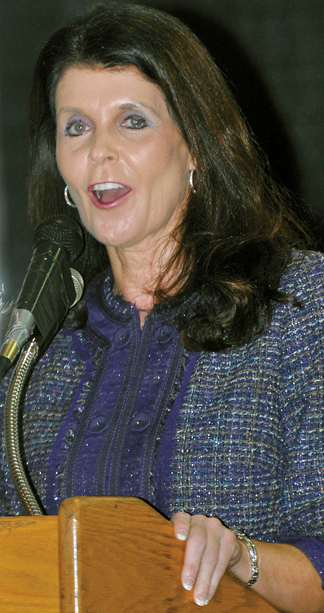 “Old faithful with a new façade” is how keynote speaker Rep. Nick Rahall, D- W.Va., referred to the $9.4 million in brick and mortar renovations to Beckley Appalachian Regional Hospital at an on-site ribbon-cutting ceremony Tuesday.

“The history and future of this hospital and coal are forever intertwined. This hospital’s foundation was poured with the blood, sweat and tears of West Virginia coal miners,” he stated, referencing the institution’s legacy as “the miner’s hospital.”

Legacy, community and future were the prevailing themes before a full auditorium of hospital supporters, employees, medical staff and community leaders.

“We want to ensure that citizens receive the best quality health care possible. The private rooms and HVAC system are important to infection control. It is critical to invest in our facilities with new equipment and with brick and mortar (improvements),” said Bowling.

Beckley Mayor Emmett Pugh, an ARH board member for nine years and most recently board chairman, reflected on the importance of the renovations to the community and economy.

“Hospitals are economic development entities,” he said. “Whenever new businesses are looking at coming into the area, they want to know, ‘How are the health care and the education systems?’ Hospitals provide a very large tax base for the City of Beckley. BARH is non-profit, but the employees live in the area and they spend in the area.”

Pugh stated that BARH, opened in 1956, had operated for decades in a 1950s environment, “… and that just doesn’t work,” he commented.

Other speakers included Chairman of the Local Advisory Council Dr. Bill O’Brien and Chief of Staff Dr. Ali Suleiman, who outlined a “wish list” for future improvements, including a Surgical Intensive Care Unit to complement the existing ICU.

“With all of your support, we will achieve our goals,” he said.

Before taking to the podium, CEO Rocco Massey, who has served a total of 32 years with BARH, took time to emphasize the importance of improved patient outcomes as a result of the extensive remodeling.

“The units are designed to improve nursing efficiency and to cut health care costs,” he stated, also connecting the hospital to the legacy of the coal miners served throughout the decades.

“John L. Lewis and Eleanor Roosevelt conducted a ribbon-cutting to open the hospital in 1956. That’s our heritage. We have a long tradition of providing quality health care to miners and to their families.”

In addition to miners, BARH has benefited the community as a non-profit hospital, with ARH systems as a whole reporting $100 million last year in unreimbursed medical expenses and write-offs.

Massey paid high compliments to the employees of BARH, including those who contributed a total of $100,000 to the capital campaign for the improvements. As testimony to their dedication, he revealed the latest quality metrics reports, earning hearty applause from the audience.

“There’s not a single indicator in red, and we are leading the ARH system in service excellence scores for our ER Department.”

Reva Bowman, a nurse supervisor at B-ARH, is proud of the changes at her workplace, which she also claims has been a part of keeping her family healthy for generations.

“This was my grandparents’ hospital. My husband is a miner, and this is their hospital, too. We need to keep it going and remember (the miners’) sacrifices.”