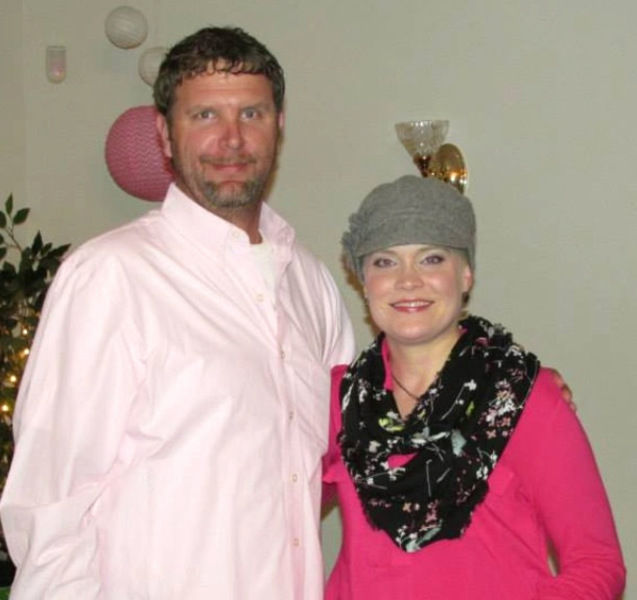 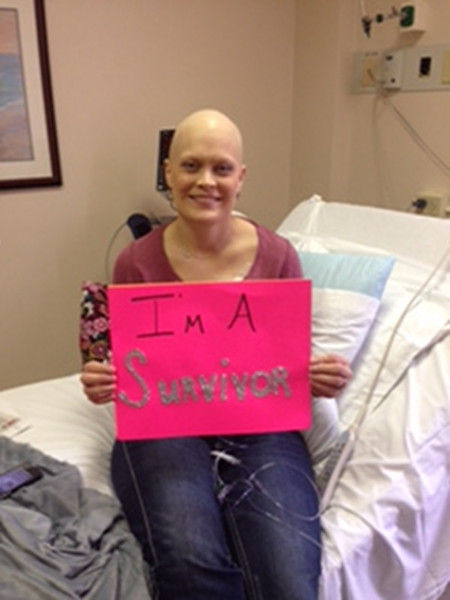 Even while facing a rare, aggressive form of breast cancer, survivor Stacy Ford said the best medicine for her was laughter.

Some of her chemo treatments were incredibly lengthy, lasting from 7 a.m. to 6 p.m., and her first treatment took even longer because it was the first time they accessed her port.

“I’m sorry you have to stay so late for me,” she told the Princeton Community Hospital nurses as their shifts were nearly over. “But is this like a bar? Do you go around to each room and yell, ‘Last call for chemo!’”

The nurses loved her sense of humor, as they see many patients struggle with overwhelming feelings of fear and sadness.

Not to say that Ford didn’t experience those emotions as well, but she chose to take a light-hearted approach to her battle, which she planned to win from the beginning.

Ford grew up in Hinton, graduated from Summers County High School, and then from Marshall University. She decided to return to her hometown, where she now works as an extension agent for West Virginia State University Extension Service.

A few members of her family had been diagnosed with cancer, an aunt and a cousin with lung and colon cancer, but never anyone with breast cancer.

But despite her being a 35-year-old woman with no family history of breast cancer, she discovered a lump in her breast one day.

“My mom (Jan Plumley) is a nurse,” Ford said. “She’s always been an advocate of knowing your body, so I’ve done self breast exams for a long time.”

When she found the lump, she knew something was wrong. “I hadn’t ever felt anything like that before.”

Ford went the next day, a Monday morning, to her regular doctor, Dr. James Blume. He was concerned as well, so he sent her for a mammogram in Princeton the next morning.

Her mammogram yielded no results of cancer, but the technician requested she have an ultrasound to confirm.

The radiologist saw a mass in her ultrasound, but he, too, thought it was some type of cyst. He recommended they keep an eye on it, and asked her to come back in three months.

“That’s the news that you want to hear. Of course, I was relieved, but I still wanted a second opinion,” Ford said.

Although she wanted to trust the radiologist’s read of her ultrasound, she and her husband John decided that a second opinion was needed.

She went back to Dr. Blume’s office in Hinton, and saw his new physician’s assistant for the first time that day.

“She was very insistent that I go have a biopsy. She said, ‘I just want to be sure, and that’s the only way to be 100 percent sure.’”

Ford followed her doctor’s orders and saw Dr. Eric Hopkins the next morning in Princeton for a biopsy.

After her exam, Dr. Hopkins asked if she’d prefer to come back in for her results, or if she would prefer a phone call. In an effort to not miss another day of work, Ford said to call because bad news is bad news, regardless of the way you hear it.

The doctor hadn’t received all of the reports back, so she didn’t know the type or stage of cancer she was facing.

“I had to wait from Friday to Monday. Friday, Saturday and Sunday were the longest days of my life.”

When she got her results on Monday, she was told she had triple-negative breast cancer, a rare, aggressive form. Even though the tumor was only about the size of a tube of Chapstick, the rate it was growing put her in a Stage Two category.

According to breastcancer.org, around 10 to 20 percent of breast cancers are triple-negative, meaning the cancer is not supported by estrogen and progesterone; therefore, it does not respond to hormone therapy treatments.

“I knew right away that I wanted a mastectomy,” Ford said. “I only wanted to fight this one time.”

Dr. Rowena Chambers, a Princeton oncologist, explained everything to her — how the cancer works, how it grows and how to treat it.

She had hoped she could schedule her surgery in the next few days and be done with it: “You just want the cancer out of you.”

But that’s not exactly how the process works. She had to do a breast MRI and a PET scan to ensure the cancer had not spread anywhere else.

“They said I found it as early as I could have. It probably hadn’t been there very long, but it was just so fast-growing.”

After consulting with a few other specialists, they all decided the best program was chemo first, surgery last. The doctors wanted to know how her body would respond to chemo, to see if the tumor would shrink, because if her body didn’t respond well, they would face a host of problems if another tumor grew.

On July 25, 2013, her four-year wedding anniversary, her chemo treatments began.

“It wasn’t exactly what we had in mind,” Ford said, but she said she had an exceptional staff at Princeton Community Hospital, all of whom made her feel comfortable and welcome.

“The nurses there are God-sent.”

She said she had a private room, where her friends and family could visit, take a nap or even watch television with her.

After her first treatment, her hair didn’t start falling out, but it did become brittle and dry. When she came back for her next treatment, all the nurses were surprised that her hair was still intact.

She poked fun at the nurses the next time she saw them — “I said, ‘You girls jinxed me!’” — because after her second treatment, her hair started coming out, piece by piece.

“I thought, ‘I can’t shed all over the place. We’re going to shave my head.’”

Her husband, her mom, her mother-in-law and her hound dog Buford joined her in the garage for the head-shaving extravaganza, all of which was filmed and sent to her brother, who is in the U.S. Air Force in Hawaii.

Before he shaved her entire head, John gave her all sorts of hairstyles, including a mohawk and a mullet.

“My hair was the least of my worries.”

She never wore a wig, just hats and scarves to stay warm.

By her third chemo treatment, her tumor had shrunk tremendously, so she didn’t have to take as many treatments as doctors originally scheduled for her.

Her mom was by her side for every chemo appointment, and John took care of her each evening after he returned home from work.

She and her husband knew they would get through it, but her battle with cancer was devastating for her mom.

“My mom, bless her heart, she just didn’t deal well with it.”

Ford was met with tears from her mom during the most mundane occasions, so she finally said, “Mom, you’re going to have to suck it up. No more tears all the time. I’m going to need you, and I can’t have a sappy mom toting me around everywhere.”

Her mom promised by her first chemo treatment that she would pull herself together, and she delivered on that promise.

Ford said she was very thankful to have such a great support system. Not only did friends and family help out, but the entire community pulled together. Neighbors made a food schedule and delivered meals each evening to her and John so they didn’t have to worry about cooking.

“They even brought them in throw-away containers so I didn’t have to wash dishes or return containers.”

Not that she ever had any doubt, but she said the experience solidified her knowing her husband would stick with her through anything.

“He never had a second of backing away, and I never felt he wasn’t going to love me any differently when my body changed.”

Her final chemo treatment was on Oct. 31, and everyone celebrated the occasion. A friend from North Carolina even drove up to surprise her with a cake.

She could no longer feel her tumor, and her surgery confirmed it — she was 100 percent cancer-free.

The doctors, Dr. Hazzard and Dr. Jacobs at West Virginia University, removed all the breast tissue from both breasts, and not a single cancer cell was found.

“I’m not saying it was a wonderful surgery, but it was not as bad as I thought it would be.”

The most difficult part was the recovery process. She was unable to get up from a seated position without assistance at first, and she had to sleep in a recliner to allow for drainage.

She knew she wanted to have reconstruction, so the doctors inserted tissue expanders during her surgery. She described them like durable plastic balloons, which slowly get filled with saline solution to help stretch the pocket to allow for a breast implant.

She had her reconstruction surgery in May, and she’s happy to say she finally has all of her strength back now.

“I don’t feel perfect, but I wasn’t able to lift anything for quite some time. I lost some muscle tone, and that’s been hard to deal with.”

Throughout her battle, she never lost any weight. She said she actually gained a few pounds from her mom’s numerous peach cobblers. Her mom wanted to plump her up because she knew how much chemo can take out of a person.

But there were only a few days Ford didn’t feel up to eating, and that was due to a sore mouth, a side effect of chemo.

And now, her hair is growing back in, curlier than ever.

“I told myself we’re women and we worry about our hair and trivial things, but bad hair days are the least of my worries. I’m never going to complain about my hair or how my clothes fit. I put it all into a different perspective. I’m here and I’m healthy and that’s what’s really important.”

She said being able to laugh about it was what got her through it.

“Cancer has all kinds of negative connotations and feelings wrapped around it, and I had those too, but we found the humor in things.”

She and John had an inside joke when she was unable to help around the house, or if she felt tired. He would say, “Oh, you’re just pulling your cancer card.”

And the day she got her cancer-free results, he announced, “Your cancer card has been officially pulled.”

“Our humor made it easier to deal with.”

She even ordered a shirt to wear after her reconstruction that reads, “Yes, they’re fake. My real ones tried to kill me.”

“I’m a firm believer that everything happens for a reason. I’m young and I have lots left to give. Cancer, even though it brought negatives, it brought a lot of positives, too.”

Because of her battle with cancer, she said she has a whole new appreciation for life, for her family and for her community.

She said she’s also extremely thankful for her doctors, all of whom helped her along her journey.

She encourages women to know their bodies and to never take no for an answer if they think something is wrong.

“Stay on top of things and don’t be afraid to ask questions.”