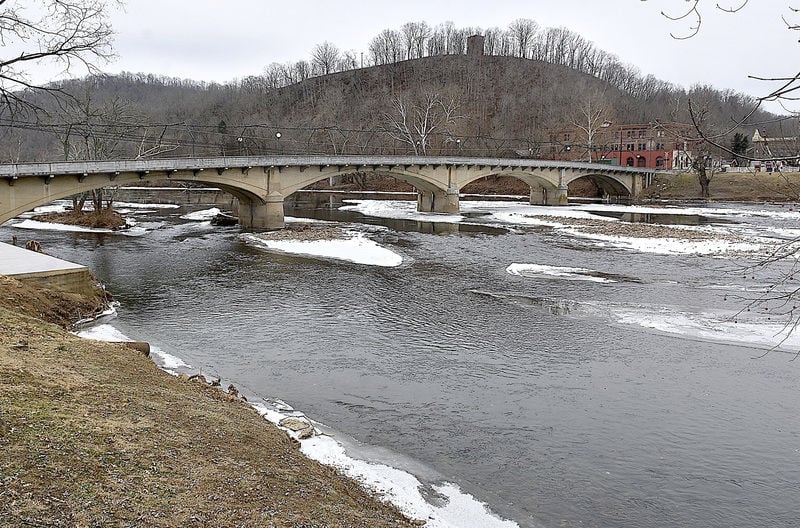 (Brad Davis/The Register-Herald) The Greenbrier River at The Alderson Memorial Bridge, built in 1914. 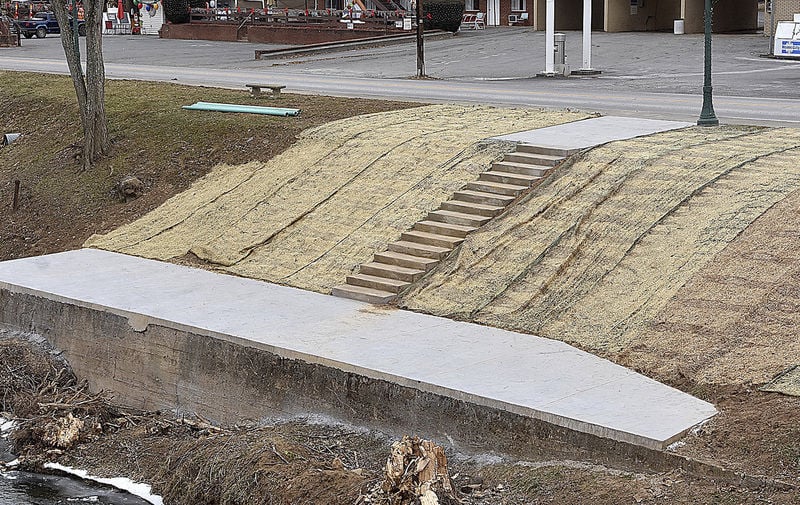 (Brad Davis/The Register-Herald) Two concrete pads being built on the Greenbrier County side at the Alderson Memorial Bridge.

(Brad Davis/The Register-Herald) The Greenbrier River at The Alderson Memorial Bridge, built in 1914.

(Brad Davis/The Register-Herald) Two concrete pads being built on the Greenbrier County side at the Alderson Memorial Bridge.

Sometime in the next few weeks, Alderson’s Strategic Riverfront Enhancement Plan (SREP) will be unveiled, culminating more than a year of work and laying out a map for a brighter future for the tiny town that straddles the Greenbrier/Monroe county line.

Many of the ideas expected to be laid out in the SREP originated in what Alderson Main Street President Jim Russell calls a “chat and chew” group that has been mulling the town’s path forward for a long while.

“The idea of developing a strategic plan had been thrown around for some time,” Russell told The Register-Herald in a Friday interview.

He said the Alderson Artisans Gallery — a home for local art exhibitions and sales — came out of those same discussions.

Acknowledging that Alderson has relatively few assets with which to boost its economy, Russell said the “beautiful Greenbrier River” was the obvious choice as a focal point around which to begin to build a plan.

Helping to move the “chat and chew” discussions into the public eye was the West Virginia Community Development Hub’s IAC (Innovation Acceleration Strategies) program. The IAC, Russell noted, offered five West Virginia communities — including Alderson — the chance to be on the cutting edge of much-needed economic diversification in the state.

Due to the 2016 flood, the launch of Alderson’s project was delayed for several months, but in September of last year, a group under the leadership of the Main Street organization formed five subject matter teams to analyze different facets of the local community. The Recreation and Quality of Life team wound up taking the lead role for Alderson in an IAC competition, winning the $5,000 prize for the Strategic Riverfront Enhancement Plan.

On the basis of having won that seed money, Alderson Main Street applied for a Flex E grant from the state Development Office, obtaining another $8,500 for planning.

Russell said the group decided to turn to the experts to develop a formal plan for the project, hiring Downstream Strategies for the job with the Flex E grant proceeds.

Recognizing the value of having tangible results from the project as soon as possible to keep community support flowing, the group took the $5,000 prize money from the Hub, combined it with $10,000 from the town, and constructed two concrete pads on the Greenbrier County side of the river. One of those pads is at street level, and the other is just above the water level. Rails for the steps that connect the two decks are the next part of the project, Russell said, noting it is currently on hold due to the cold weather.

In formulating the SREP, the Main Street-directed group understood that community involvement was key, he noted.

“We knew it had to be the community’s project for it to have any transformational value,” he said.

To encourage that involvement, the group held three public meetings to present the bones of the SREP and seek the community’s input. A “conceptual draft” of the plan was released a few months ago, and Downstream Strategies — a consulting firm with an office in Alderson — has continued to flesh out the plan in anticipation of presenting it to Alderson Town Council for adoption.

At the heart of the SREP, Russell said, are the goals of opening up the river — making it more visible and usable to visitors and residents — and stabilizing the riverbank, which has seen damaging erosion over the years.

Although Russell said it might not make the cut for the initial phases of the SREP, he would also like to see better access provided on the Monroe County side of the river (aka “Historic Alderson”), facilitating links to some of the businesses in the shopping district. He said he envisions something along the lines of a canoe and kayak “put-in” dock that would allow visitors to paddle the river into Alderson and walk over to a local sandwich shop or simply stroll the town.

An area native who left shortly after graduating from Alderson High School only to return 49 years later, Russell has picked up the torch once more for his hometown, bringing great enthusiasm to the task at hand.

“We have a plan to showcase what we’ve done,” he said.

One of those future showcase events hinges on the organization that started the ball rolling. Russell said he understands the West Virginia Community Development Hub plans to conduct a community symposium in Lewisburg in the spring, and that his town will have a role to play in that event — perhaps serving a meal to symposium participants on Alderson’s scenic pedestrian bridge, spanning the Greenbrier River.

“We need to make the most of what we have,” Russell said.

For additional information about Alderson Main Street, visit www.min7th.com/ams/ or check out the organization’s Facebook page.