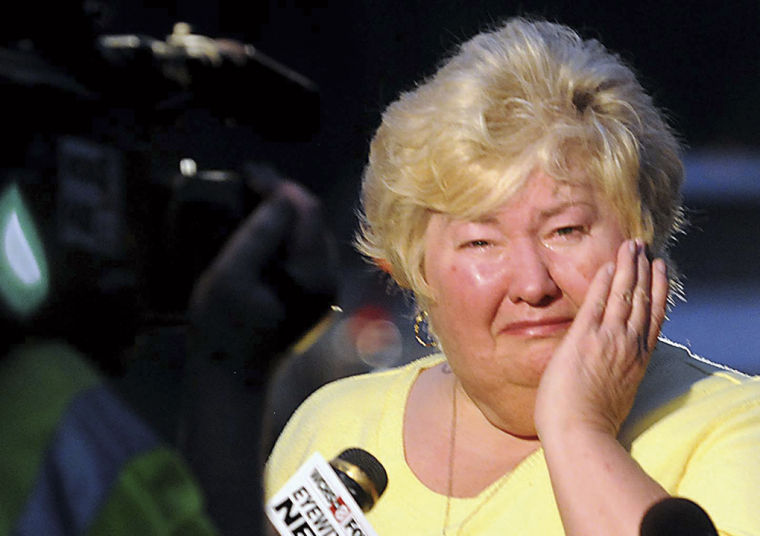 Jenny Waycaster, of Hotchkiss, waits outside the Performance Coal Company Upper Big Branch Mine in Montcoal, Raleigh County, on Monday. Waycaster said her son, Kevin Lambert of Fairdale, was in the mine at the time of an explosion which killed 25 coal miners and left four unaccounted for. 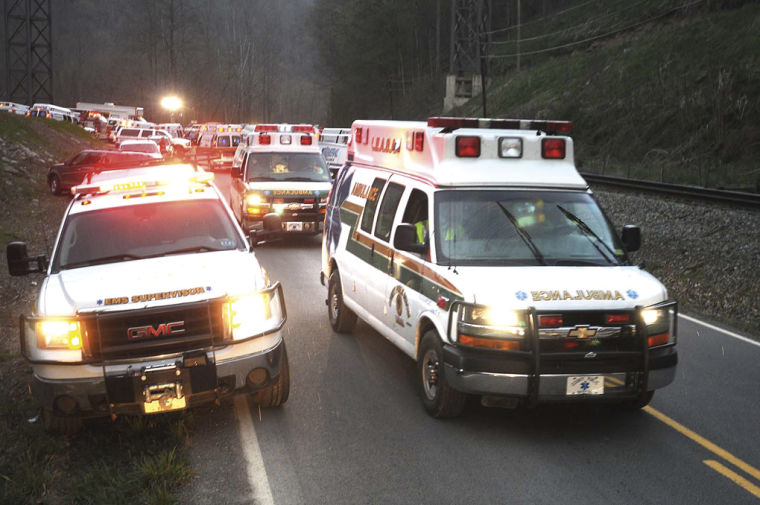 Dozens of ambulances and other emergency vehicles were dispatched to Performance Coal Company’s mine site in Montcoal late Monday afternoon after an explosion was reported. Unconfirmed reports indicate that a mantrip spark may have triggered the blast at the Massey Energy-owned mine. 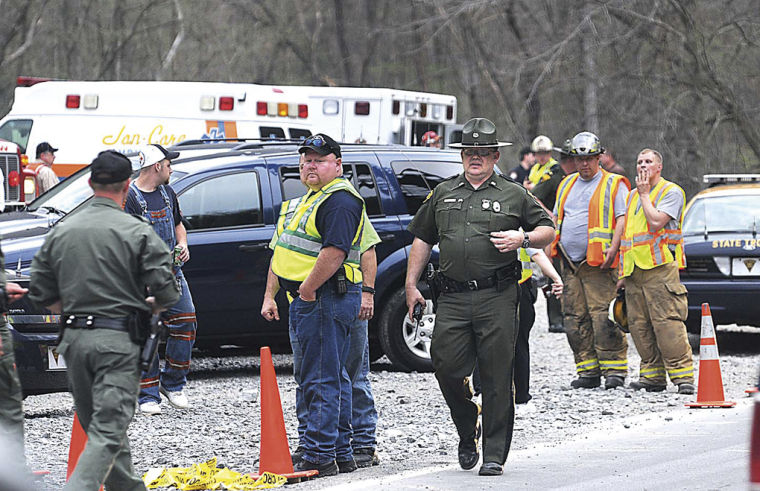 Emergency and rescue personnel wait outside the Performance Coal Company site in Montcoal, Raleigh County, on Monday. An explosion took place at the Massey Energy Mine shortly after 3 p.m.

Jenny Waycaster, of Hotchkiss, waits outside the Performance Coal Company Upper Big Branch Mine in Montcoal, Raleigh County, on Monday. Waycaster said her son, Kevin Lambert of Fairdale, was in the mine at the time of an explosion which killed 25 coal miners and left four unaccounted for.

Dozens of ambulances and other emergency vehicles were dispatched to Performance Coal Company’s mine site in Montcoal late Monday afternoon after an explosion was reported. Unconfirmed reports indicate that a mantrip spark may have triggered the blast at the Massey Energy-owned mine.

Emergency and rescue personnel wait outside the Performance Coal Company site in Montcoal, Raleigh County, on Monday. An explosion took place at the Massey Energy Mine shortly after 3 p.m.

Officials at the site of a Monday afternoon explosion that killed 25 miners at Massey Energy’s Performance Coal Co. now say it could be as much as 48 hours before drilling of ventilation bore holes is complete.

The bodies of seven of miners had been transported to the state medical examiner's office for autopsy by 7 a.m. Tuesday, according to a statment from the West Virginia Department of Health and Human Services.

“The staff and the five pathologists will do all it takes to get the bodies back to their families as quickly as possible,” the statement said.

Of the 25 miners killed, 11 have been identified and 14 have not been identified. Names have not been officially released. However, The Associated Press has spoken with family members have four men they say were killed: Benny R. Willingham, 62, who was due to retire in five weeks after 30 years mining, 17 with Massey; Timmy Davis, 51, and his nephews, Josh Napper, 27, and Cory Davis, 20.

Four miners remained unaccounted for; two others were transported to area hospitals Monday.

The blast at the Upper Big Branch Mine, located at Montcoal in western Raleigh County, occurred about 3 p.m. Monday, according to Kevin Stricklin, a Mine Safety and Health Administration (MSHA) administrator.

A nine-man crew was exiting the mine on a mantrip when there was an apparent explosion, Stricklin said. Of the nine miners on the mantrip, seven were killed instantly.

The explosion’s cause is undetermined, Stricklin said. But according to unconfirmed reports received by The Register-Herald, a spark from a mantrip triggered the blast.

Rescue teams searching for the missing miners were pulled out just before 2 a.m. when concentrations of methane and carbon monoxide inside “were to the point that they were risking their own lives,” Stricklin said.

Officials say they must drill through 1,200 feet of earth and rock to vent the mine. A road to the drill sites must be bulldozed.

“We're hoping to bulldoze our way up there today," Stricklin said. "And probably a good guesstimate would be about two days, to get the bore hole into the mine."

Officials have said they believed the missing miners may be as far back as 8,000 feet from the mine portal.

Authorities are hoping the trapped miners made it to one of the mine’s refuge chambers, but Stricklin appeared to hold out little hope that any miners were left alive Tuesday.

There was no radio communication with the miners, and any phones inside the mine would have been knocked out by the explosion, Stricklin said.

He said the rescue team members were dismayed when called out of the mine and said if there was even a minute chance that someone is still alive, they would not hesitate to go back in.

“It is ingrained and embedded in them to rescue trapped miners,” Stricklin said. “It won’t be a problem for them to go back.”

Rep. Nick Rahall, who arrived at the site Monday evening, said the rescue teams’ response time was the quickest he had ever seen. The 3rd District Democrat added that the teams had just completed quarterly retraining.

Massey Energy officials, Stricklin said, were working just as diligently as the state and MSHA workers.

Family members reportedly gathered on the Massey property and at Whitesville Baptist Church to find out what happened to their loved ones — and to pray.

Arnett resident Randy Cox said his brother has two sons-in-law who work at the mine, and both men are OK. He said one got out of the mine just before the explosion. The other was getting ready to enter.

“I didn’t know what to think,” he said. “I just got down on my knees and started praying that they were OK.”

Cox was an 18-year coal miner who is now disabled. He said such a tragedy “touches home.” At that time, only six fatalities had been confirmed, and Cox was hoping there would be no more.

“I never was in a situation like that, but I have seen roof falls,” he said. “I’m praying for them, and I hope this turns out OK.

Harper resident Grace Lafferty came to the mine site Monday to pray. Although she had no immediate family members working at that particular mine, she said she came from a family of coal miners. She also knew several people who worked in the mine. She did not know who would have been working at the time of the explosion because shifts frequently alternate.

“You think this happens in other places, like Sago or in Pennsylvania,” she said. “You don’t expect that to happen here.”

The explosion is being covered nationally, and Lafferty said she wanted the rest of the country to know the real character of people in the Coal River Valley.

She noted the Coal River Valley has been in the middle of ongoing surface mining controversies and protests. But now, she believes this has been pushed aside as citizens are coming together to support one another.

“This is a family-oriented, loving community,” she said. “The area has gotten a lot of bad press because of a lot of protests, and usually, we look like hillbillies.

“But as a whole, I wouldn’t want to live anywhere else over this area...

“When something like this happens, all is forgotten,” she said. “It’s not about Massey Coal Co. It’s about those men.

“... People from here are all coal mining families. It doesn’t matter because we’re all family.”

Rahall said all appropriate agencies were notified and responded quickly. He praised their work as they continued to find the trapped miners.

Like Lafferty, Rahall said he wanted the rest of the country and the world to know West Virginians put all differences aside to help their fellow citizens dealing with tragedy.

“West Virginians are tough and will bind together,” he said. “We will come across all different philosophical and political lines.

“The people in our coal-mining communities are strong. They provide the coal that fuels the nation’s electricity.”

Rahall asked citizens to pray for the coal miners and their families.

“Just pray. That’s all we can do at this point,” he said. “It can certainly provide comfort for the ones waiting for word on their loved ones. They can make it through with prayer and God’s blessings.”

West Virginia has weathered multiple mine disasters over the last few years — but no one ever gets used to them, Rahall said.

Jimmy Gianato, director of the state Division of Homeland Security and Emergency Management, said Gov. Joe Manchin was out of town when the explosion occurred, but he was on his way back.

Manchin’s office issued a statement, in which the governor said he spoke to President Barack Obama. He said that the president has promised to make every asset available to help and that both of them would stay in touch as the rescue continues.

“This is devastating news, and our hearts and prayers go out to the families of the miners who have died,” Manchin said. “We are offering everything we can to assist those families at this time.

“For those families who are still waiting for news on their missing loved ones, I want them to know that we are doing everything possible in cooperation with federal officials and the company to get our miners out as quickly and safely as possible.

“We are all working diligently together, and I ask that everyone pray for the miners, their families and our rescue teams.”

Sen. Jay Rockefeller, D-W.Va., said, in a statement, that he was working with both federal and state officials to get as much information as possible. He was also working to make sure all resources were made available.

Rockefeller said both he and his wife Sharon were heartbroken to hear the news and that they were sending their thoughts and prayers to the miners and their families.